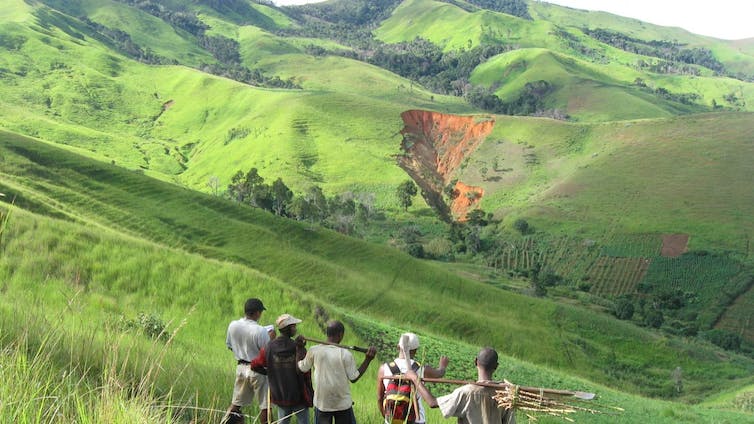 Much of Madagascar has been deforested to make way for small-scale agriculture.
Mahesh Poudyal

More than 100 world leaders meeting at COP26 – the UN climate summit in Glasgow – have committed to halt and reverse deforestation by 2030.

The countries that have signed the agreement contain 85% of the world’s forests. The announcement includes £14 billion (US$19.2 billion) of public and private funds for conservation efforts. In addition, 28 countries have committed to ensuring trade in globally important commodities such as palm oil, cocoa and soy, does not contribute to deforestation.

Saving the world’s dwindling forests is essential if we are to avoid dangerous climate change. Forests soak up carbon from the atmosphere and cutting them down releases it. On balance, forests removed about 7.6 billion tonnes of carbon every year over the last two decades. This is roughly 15% of global emissions.

But forests around the world are moving from net sinks of carbon, which soak up more than they release, to net sources. While the Amazon rainforest as a whole remains a carbon sink (for now), ongoing land clearance in parts of the Brazilian Amazon mean forests there are already emitting more carbon than they absorb. Increasing global temperatures are causing more forest fires too, further raising emissions from forests and so driving global temperatures higher.

Given that the window for keeping global warming below 1.5°C, or even 2°C, is rapidly closing, humanity desperately needs remaining forests to stay standing. So is the Glasgow leaders’ declaration on forests and land use up to the task?

This is only the most recent commitment to stop forest loss in a series of similar initiatives. Back in 2005, the UN Forum on Forests committed to “reverse the loss of forest cover worldwide” by 2015. In 2008, 67 countries pledged to try and reach zero net deforestation by 2020. This was followed by the New York declaration on forests in 2014 which saw 200 countries, civil society groups and indigenous peoples’ organisations commit to halve deforestation by 2020 and end it by 2030.

These earlier efforts clearly failed to meet their targets. On average, rates of forest loss have been 41% higher in the years since the New York agreement was signed. It’s almost impossible to know what deforestation rates would have been without these pledges.

It is important not to vilify those clearing tropical forests. In most cases, whether it’s oil-palm plantation workers in southeast Asia, or the owner of a family-run cocoa farm in Ghana, these are just ordinary people trying to make a living. Where those clearing forest are poor subsistence farmers with few alternatives, such as many in Madagascar for example, preventing forest clearance can mean some of the poorest people on the planet are bearing the cost of tackling climate change. Given that such people contribute relatively few emissions, this isn’t very fair.

Why is it so hard to slow deforestation?

Conserving forests benefits everybody by stabilising the climate. But logging, or clearing a patch of forest for farming, benefits the people involved in a much more direct and tangible way. Ultimately, to keep forests intact, those who benefit from forests (that’s all of us) need to fund efforts to conserve them.

Despite criticism, and problems with implementation, this is the underlying rationale to REDD+ (Reducing Emissions from Deforestation and Degradation) – the UN mechanism whereby tropical nations are paid for efforts to conserve forests.

Just before flying to Glasgow, Madagascar’s minister of environment and sustainable development, Baomiavotse Vahinala Raharinirina, visited a village to ask people their views on what would make forest conservation more effective. They spoke about the lack of alternative livelihoods, the need for more support to help them manage the forest sustainably, and the fact that local communities often lack the ability to exclude those who wish to exploit forests.

Madagascar has contributed relatively little to climate change, but our people are suffering the consequences. For example, a million people in the south are in need of food aid because of the effects of a drought caused by climate change. We are trying to do our bit to reduce emissions by conserving and restoring our forests and have signed the Glasgow Leaders Declaration, however this won’t be achieved without more resources… We will need support from the international community to help us achieve this.

I am cautiously impressed with how much attention is being paid to the question of fairly reducing tropical deforestation at COP26. The first event in the UK-led programme brought forest communities and indigenous people together to discuss lessons from the last decade of forest conservation.

Perhaps I am naive, but I sense a helpful change in tone among world leaders, from assuming that forest conservation inevitably delivers triple wins which benefit the climate, biodiversity and local livelihoods, to a more honest acknowledgement that often, there are winners and losers. Only by finding ways for conservation to benefit those who live alongside forests can the world hope to keep those forests absorbing emissions for years to come.

So, will this pledge finally halt and reverse deforestation? Unlikely. But given the importance of the issue, the renewed focus on deforestation at COP26 is certainly positive.

Italy is in the midst of an acute economic and health crisis. Little help has  been forthcoming from the EU or European Central Bank. Sergio Cesaratto is Professor of Growth and Development Economics and of […]

The EU is dumping its rubbish politicians on the world, just like it dumps its plastic waste. The EU political class, a caste of entitlement. Ashoka Mody is Charles and Marie Visiting Professor in International […]