Julian Assange, the founder and publisher of WikiLeaks, who is languishing in a high-security London prison awaiting a ruling to determine whether he will be extradited to the US to ultimately spend the rest of his days in a supermax prison, never to be heard from again.

Karen Sharpe is the editor of Julian Assange in His Own Words, OR Books 2021 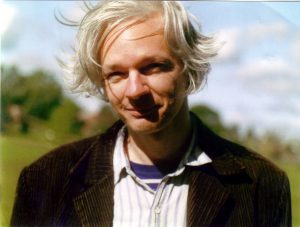 Julian is a pioneering journalist, publisher, author. As a journalist he has received some of the highest awards in the field; as a publisher he devised an ingenious system whereby whistleblowers could anonymously submit information about war crimes, crimes against humanity, corruption, and much more, that WikiLeaks published for all to read and use; as an author he wrote books, blogs, essays that reveal his perspicacity and prescience, his polymathic interests, and his humanism. He is also an ardent crusader for peace and justice who has been nominated eight times for the Nobel Peace Prize.

If an Australian journalist who was never under US jurisdiction can be dragged out of the Ecuadorian embassy in London where he had been granted asylum and locked up in a British prison awaiting a decision as to whether he will be extradited to the US to face charges under the specious Espionage Act, then can anyone whose words may displease the status quo be safe anywhere in the world? Following three court hearings Julian’s fate is now in the hands of British Home Secretary Priti Patel, who is to decide within the next week if Julian will be extradited. His crime? To have practiced true journalism in uncovering and publishing meticulously documented evidence of war crimes, corruption, illegal government surveillance and hacking, among a multitude of malfeasances.

In the current case the charges under the Espionage Act relate to 2010 WikiLeaks releases found in the Afghan War Diary, which contains more than 90,000 precise and often gruesome reports of the US military’s deadly actions, and the Iraq War Logs, nearly 400,000 US Army field reports that reveal war crimes and the true number of civilians killed, a part of which is the much-viewed Collateral Murder video.

In all, WikiLeaks has published some 10 million documents and associated analyses, which also include Cablegate, which consists of more than 251,000 US diplomatic cables showing numerous consequential scandals around the world, and the Spy Files, showing the industrialization of global mass surveillance, and much more.

Despite the massive number and variety of WikiLeaks documents, nothing has ever been found to be inaccurate. What writers, journalists, publishers can say the same, and presumably for an infinitely smaller body of work?

A note of biting irony: the perpetrators of the crimes revealed by WikiLeaks have never been charged, while the person who published documentation about them is struggling to stay safe and sane in near-total isolation in Belmarsh Prison, notoriously referred to as Britain’s Guantanamo, the reference being the subject of thousands of WikiLeaks documents comprising the Guantanamo Files, which reveal the routine torture and abuse of prisoners held at Guantanamo Bay.

Increasingly groups and individuals all over the world have been demanding that Julian’s extradition be dropped and that he be freed. From journalists’ groups to human rights organizations, from elected officials to a Nobel laureate, tens of thousands of people have written and signed petitions to Priti Patel calling on her to block the case.

While pressure can’t be put on judges to make the right decisions, Patel is a politician, and thus subject to voter confirmation or repudiation. As WikiLeaks Editor-in-Chief Kristinn Hrafnnson told Joe Lauria of Consortium News: “For the first time [Julian’s case] is in the hands of a politician, and Priti Patel, if she wants to think about her legacy … should do the right thing.”

He added, “I’m hoping this is something that will be taken up in the Cabinet here [in London]. Let’s not forget that Boris Johnson was a journalist. He was part of the media community and should have better understanding of this case than many others.”

Dunja Mijatovic, the human rights commissioner for the Council of Europe, also has grave concerns about the case against Julian, as enumerated in a letter to Patel. She said: “It is my view that the indictment by the United States against Mr. Assange raises important questions about the protection of those that publish classified information in the public interest, including information that exposes human rights violations. The broad and vague nature of the allegations against Mr. Assange, and of the offenses listed in the indictment, are troubling, as many of them concern activities at the core of investigative journalism in Europe and beyond.

“Consequently, allowing Mr. Assange’s extradition on this basis would have a chilling effect on media freedom, and could ultimately hamper the press in performing its task as purveyor of information and public watchdog in democratic societies.”

Amnesty International expressed similar concerns: “If the Home Secretary certifies the US request to extradite Julian Assange, it will violate the prohibition against torture and set an alarming precedent for publishers and journalists around the world. … If the UK government allows a foreign country to exercise extraterritorial criminal jurisdiction to prosecute a person publishing from the UK, other governments could use the same legal apparatus to imprison journalists and silence the press far beyond the borders of their own countries.”

Censorship in the US is at a frightening level, and incarcerating journalists in high-security prisons and even assassinating them (an act the CIA contemplated against Julian, per a Yahoo News investigative article, and a regular practice in many countries), is an eminently effective form of total censorship. The murdered or imprisoned person is forever silenced, and other journalists get the message.

But it’s not too late to do everything we can to try to free Julian, whose life has become even more precarious in Belmarsh as his health has steadily declined, even resulting in his having suffered a mini stroke.

While Julian’s voice has, for now, been silenced, ours can still be heard, so we must all speak out loudly and clearly wherever and however we can to denounce the illegal and inhumane treatment of the foremost champion of justice, accountability, freedom of expression, whose unceasing persecution reveals serious consequences for all who seek to speak and publish the truth. We must demand that the extradition be dropped and that Julian be freed.

As Julian has said, “I am unbroken, literally surrounded by murderers, but the days when I could read and speak and organize to defend myself, my ideals, and my people are over until I am free. Everyone else must take my place.”

You might be able to police a protest, but you can’t arrest a rising tide. Bill McGuire is Professor Emeritus of Geophysical & Climate Hazards at UCL, and a co-director of the New Weather Institute. His current […]

For private hire drivers and food delivery couriers in the gig economy who have to pay for the costs of their own vehicle, surging fuel prices are pushing them to the brink. The Gig Economy […]

Politicians who are part of the system hide, as far as possible, the complicity of profit-driven capitalism in causing social problems. Richard D. Wolff is professor of economics emeritus at the University of Massachusetts, Amherst, […]