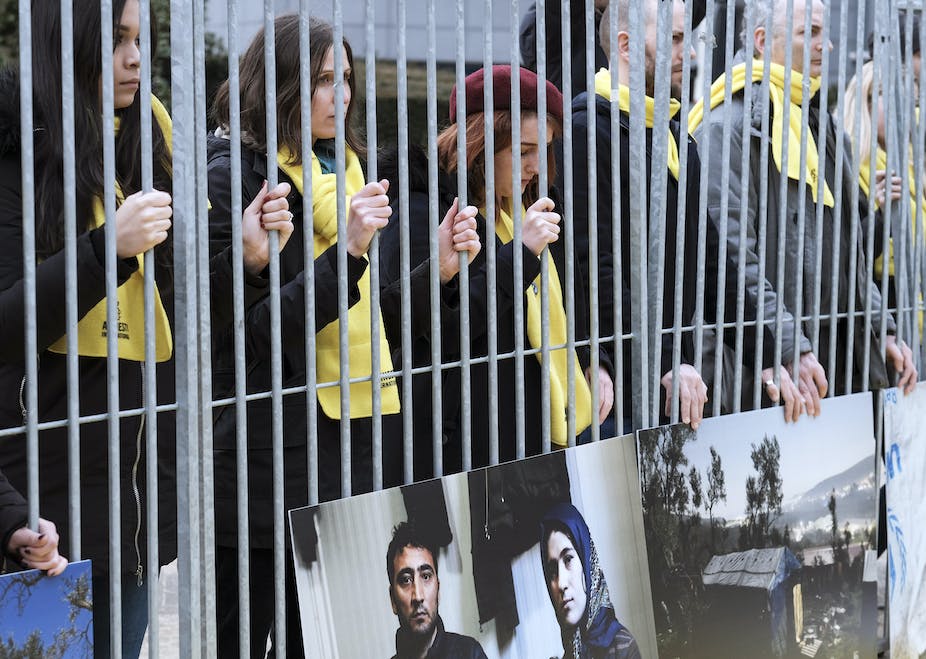 March 2018 protest outside the European Commission in Brussels against the deal. Ol

An agreement between the European Union and Turkey that came into force two years ago on March 20 2016, has reduced the number of migrants arriving on the shores of Greek islands and, however precariously, salvaged the integrity of the Schengen visa system.

But while the EU-Turkey Joint Action Plan was justified as a measure that would reduce deaths at sea and protect human dignity, the dramatic increase in the death rate of those crossing the Mediterranean in 2016 and deteriorating conditions for migrants in Turkey and Greece expose a reality at odds with that rhetoric.

Instead, the plan reflects the philosophy that has long informed the EU’s migration policy: containment.

The EU pursued its deal with Turkey in a state of panic following the dramatic rise in the number of people making their way across Europe after landing on the Greek islands from Turkey in summer of 2015. Happy to exploit the EU’s desperation as the Schengen system came under intense pressure, and emboldened by the divisions between EU member states and institutions, by the end of October Turkey had extracted a promise of €6 billion funding by 2018.

The deal struck between the EU and Turkey also committed to the acceleration of visa-free travel for Turkish citizens and the “re-energisation” of EU membership talks. In return, it was anticipated that Turkey would accept the return of people who reached Greece by sea, improve conditions for refugees in Turkey, and use its security forces to intercept migrants and stop boats leaving its shores. In parallel, for every person returned to Turkey, a Syrian refugee would be accepted for resettlement in the EU, while refugees in Greece and Italy would be relocated to other EU countries.

When the deal came into force five months later on March 20, it had immediate implications for refugees hoping to seek asylum in Europe. Departures from Turkey became increasingly difficult and dangerous as Turkish coast guards and military personnel – with a history of shooting at refugees – secured its Mediterranean border. While the EU claimed that arrivals in Greece reduced by 97% in the year following the deal, the number of deaths in the Mediterranean did not, as refugees became more dependent on people smugglers and were driven to take far more dangerous routes to Europe from North Africa.

Those unable to leave Turkey continue to experience restrictions on access to basic services and employment. And as the refugee population reaches nearly 4m, there are still no prospects of full protection under the 1951 Refugee Convention and increasing resentment from locals. This precarious situation has been exacerbated by increasing authoritarianism and human rights abuses in Turkey, with the Erdoğan government escaping the reprimands that would generally be directed towards an EU candidate country with such declining democracy, rights and rule of law standards.

In Greece, those already on the Greek islands have effectively been detained while those on the mainland have been prevented from moving beyond Greece’s borders. The legal ambiguities of the action plan and multiple rulings by Greek asylum tribunals that Turkey does not provide effective protection for refugees have meant that only 4% – 1,896 of 45,792 – of those arriving from Turkey to Greece since March 2016 have been returned. Instead, new arrivals must be processed in Greece rather than returned to Turkey, undermining one of the EU’s priority clauses in the deal and resulting in overcrowded, squalid and unsafe conditions for refugees in Greece.

These conditions could have been mitigated to some extent with the effective implementation of a comprehensive relocation scheme. But member states – and particularly the Visegrad countries that have refused to accept any refugees – have been stubbornly reluctant to engage in joint action based on solidarity and the sharing of responsibility. As such, the EU programme that promised to relocate 160,000 refugees from Greece and Italy to other EU countries closed at the end of 2017 with only around 27,000 places filled.

And as negotiations begin in Brussels on the next phase of the EU’s approach to irregular migration, the tensions between EU member states and institutions are conspicuous. While almost all member states failed to meet their quotas for relocation, there is a clear divide between the countries that begrudgingly support the approach, and the position of those as viscerally opposed, such as Hungary. Its prime minister, Victor Orban, described the programme as something enforced by western EU countries under the threat of “rape”.

The countries that oppose quotas – many of which are subject to legal proceedings by the European Commission for refusing to accept relocated refugees – have been buoyed by recent election results favouring anti-immigration parties and European Council president Donald Tusk’s description of the relocation programme as “highly divisive” and “ineffective”. They are now looking to build a coalition against pro-quota member states and hope to convince others that a continued emphasis on containment, rather than relocation, remains the only broadly acceptable solution, despite the costly concessions required to sustain the co-operation of transit states such as Turkey.

The EU fact sheet that accompanied the launch of the deal two years ago claimed that “human dignity is at the core of our common endeavour”. But the deal has instead revealed a reversal of the power asymmetries between the EU and Turkey and exposed the moral compromises that the EU is prepared to make in the face of what American political scientist Kelly Greenhill has called Turkey’s “weapon of mass migration”.

While the EU might want you to think that its migration crisis is over, the truth is that, as Mediterranean drownings are confined to the waters off North Africa rather the beaches of European holiday destinations, and refugees are contained outside or at the periphery or the EU, the EU-Turkey deal has simply pushed refugees out of sight and out of mind.

Unable to generate a domestic consensus and powerless to counter the priorities dictated by the euro, social democracy must continue to fail at home while divisions among EU nations deepen. Ashoka Mody is a visiting […]