This piece is taken from a short book entitled “Austerity: 12 Myths Exposed” edited by Bryan Evans, Dieter Plehwe, Moritz Neujeffski and Stephen McBride, which we can highly recommend. As the authors write:

“Belt tightening austerity policies have been the path for most countries shaken by the financial crisis more than ten years ago. The deep spending cuts were often justified based on questionable grounds. Austerity: 12 Myths Exposed debunks commonly held beliefs by the advocates of austerity as the solution to overcome an economic crisis.”

Lukas Haffert is senior researcher in comparative political economy at the University of Zurich. 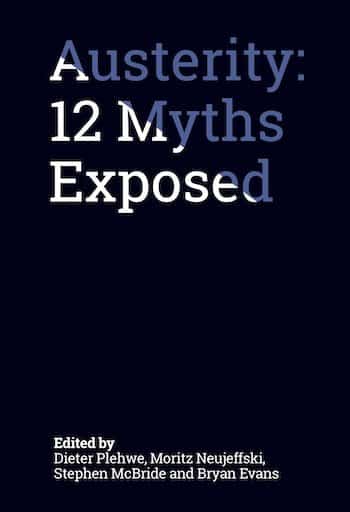 Swabia is a prosperous region in the south-west of Germany and its people, especially its supposedly thrifty housewives,became an emblem of German economic-policy orientation during the Europe crisis. According to the myth of the Swabian housewife, governments should follow the same principles as individual households when making economic decisions.

When Angela Merkel invoked the Swabian housewife to criticize financial markets in 2008, she managed to popularise two myths with just one statement. ‘One should have just asked a Swabian housewife,’ Merkel proclaimed.‘She would have told us that you cannot live beyond your means in the long run.’ While she was specifically refer‐ring to financial institutions, her statement seemed to elevate the economic myth that governments should behave like private households into a semi-official doctrine of German economic policy-making. By doing so, she also laid the basis for a powerful political myth about the sources of German policies in the euro crisis.67Similar to the fairytale of the brave little tailor, another mythical Swabian, Merkel created two myths at one blow.

The first is already familiar from the preceding chapter: it suggests that what is economically rational for an individual household will also be rational for an entire country and for its government. Since individuals must not spend more than they earn, neither should governments. Treating governments as if they were private households, however, misses the simple fact that an individually beneficial behaviour can become quite harmful if everybody starts to adopt it. An individual may indeed benefit from spending a little less and saving a little more of her income. If everybody decides to spend a little less,however, aggregate demand decreases and many people’s incomes will decline. In the extreme case of this ‘paradox of thrift’, the decision to save more will even lead to a decline in savings overall.

This is actually what happened in Greece, where the ratio of public debt to GDP increased throughout the euro crisis, despite incredibly harsh savings measures. The reason was that the Greek economy collapsed even faster than the government could impose new austerity programs, in part because austerity caused a steep decline in domestic demand. Since a country’s capacity to repay its debt depends on the strength of its economy, austerity programmes were thus self-defeating—and this does not even take into account the enormous harm they did to Greek citizens.

What is more, as the preceding chapter has pointed out, it68 is even questionable whether an uncompromising policy of thrift would be good economics for a private house‐hold. This is a point that real (as against mythical)Swabian housewives understand very well. Indeed, an equally famous cliché characterizes Swabians as Häusle‐bauer—own-home builders. Building a home, however,requires a mortgage. Not unfittingly, the biggest German building society took its brand name from its Swabian home town, Schwäbisch Hall. Moreover, Swabians are famous for keeping their house in good shape, which includes investments in renovation—in household infrastructure, so to speak.

Despite its theoretical and empirical weaknesses, the myth about the macro-economic wisdom of the Swabian housewife is invoked so often that it has become the basis for a second myth. This tale, which is particularly popular among international commentators, elevates the Swabian housewife to a guiding star of German policy-making. Whenever international observers cannot make sense of the apparently illogical demands of German politicians in European negotiations, they turn to this narrative. The casalinga sveva even has her own entry in the Italian(although not the German) version of Wikipedia.

Assigning such an elevated role to this myth is attractive,as it makes German economic policy in the euro crisis seem a simple matter of wrong headed economic theory: if Germans just understood that the individual household69cannot be the role model for whole countries—not to mention monetary unions—they would start to support more sensible economic policies. Thus, it offers not just a diagnosis but also a cure for the German stubbornness in European economic policy-making: convince them of the differences between households and states, and they will change their positions.

This interpretation, however, misunderstands the role of the Swabian-housewife rhetoric (as with the routine invocation of the traumatic hyperinflation experience) in German politics. These imaginations are not the root cause of German policy preferences, but rather a rhetor‐ical tool to cloak hard material preferences in an aura of simple common sense.

After all, the German economy does not rely on domestic consumption but on exports as the main source of economic demand. Therefore, international competitiveness is the most important goal of German economic policy. In this export-driven growth model, restraining domestic expenditure may not be a matter of ideological choice but rather of economic necessity. To remain competitive on international markets, German export industries need to keep wage increases in check. This is even more attractive in the context of the euro, since this wage moderation translates into an effective devaluation of the German currency and thus further advances competitiveness. As the political economists Torben Iversen and David Soskice have argued, the government thus needs to signal that it will not support large wage increases with a loose fiscal policy. Swabian-housewife rhetoric signals the intentions of the government—but it does not cause them.

This does not mean that Swabian-housewife economics is good for all Germans: rather it privileges the economic‘insiders’ in the German export sector at the expense of ‘outsiders’ in domestic service industries. Since the interests of the export sector dominate German politics,however, policy-makers will often pursue policies which look as if they are inspired by a Swabian housewife.Hence, even if one could convince German politicians of the logical fallacy at the heart of this myth, it is unlikely that they would pursue substantially different policies.Indeed, while rhetorical allusions to symbols like the‘black zero’ have become less common since the Social Democrat Olaf Scholz replaced the conservative Wolfgang Schäuble as minister of finance, the substance of German fiscal policy has changed very little.

The European Parliament is meeting this week, and the committee that will decide the future of the controversial new Copyright Directive will meet next, and depending on what they do, it might be the end […]

One of the most important victories of neo-liberalism was banning serious fiscal policy by democratically elected governments to deal with economic crises, relegating this power to monetary policy of purportedly independent, yet unelected, central banks. […]