We shall encounter the same problem with climate change. The rich countries will horde all the new technologies, leaving poor countries to continue their fossil fuel course.

Until a friend asked me yesterday, I have not given much thought to the vaccine gap between rich and poor countries. My “line of business” is global inequality; so I am inured to the fact that the gap in per capita incomes between rich and poor countries is huge, that the gap in their CO2 emissions per capita is similarly large, and I was neither surprised not did I pay much attention to the vaccine gap.

But his question led me to think a bit more carefully. And here is a small “model” that I think explains that gap. I apologise if somebody has already produced something similar or better. If not, I think that this small model, which can be made much better by the introduction of real data, may usefully be the basis of a nice paper.

How does the model work? First, assume that only rich countries produce vaccines; poor countries can buy them or are given vaccines. We’ll assume that they are given. Then, suppose that all governments prefer to give vaccines to own citizens than to foreigners. This is, I think, obvious: citizens vote for the government and expect things from it, not foreigners. Third, introduce the externalities of the pandemic. The pandemic is not over until everybody is vaccinated and safe. (Yes, it could be over for the rich also if it remains endemic in some parts of the world, but given the level of infectiousness of covid, we can disregard this possibility). So, let’s say that from each vaccine given to foreigners, rich country gets a small gain α: its own infections are reduced too if fewer people in poor countries get covid. 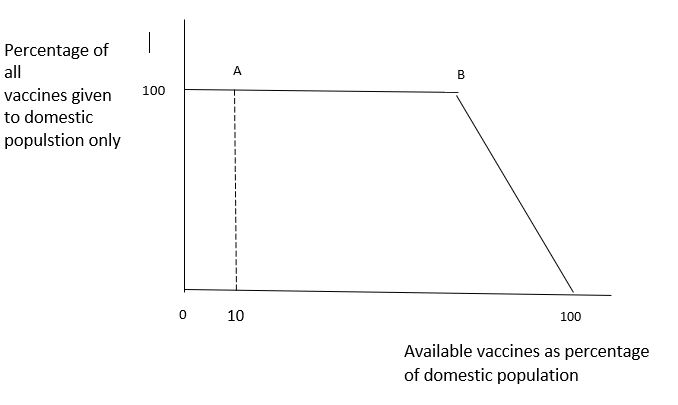 But note that as we move toward 100% domestic coverage, the gain from additional domestic coverage may become less than α. Why? Because  the number of domestic infections may be reduced more by helping to control the spread of the disease elsewhere than by having an additional domestic citizen vaccinated. This happens at point B, and after that point, the rich country becomes willing to give vaccines to the poor. It thus seems that eventually all rich countries will, after vaccinating (say) 80% of their populations, reach the point at which the flow of vaccines to the poor world will begin.

But is it true? We have not taken into account that the pandemic is not a one-shot (so to speak) event. There are new waves of the virus, and everyone requires additional booster shots. So even if at the end of the first wave, the rich country ended with almost 100% coverage of the domestic population and was thus willing to share vaccines with the poor world, the next wave will immediately push it back to the beginning, to our point A where it would have just enough for 10% of domestic population’s boosters. As the second wave progresses, the rich country will traverse exactly the same path as in the first wave, will again reach point B, might begin to share vaccines—only to be set back to the point A by the third wave.

Things get even worse afterwards. As we do not know how many waves there may be, it makes sense to build stocks of vaccines: it thus makes sense, as some rich countries have indeed done, to have 200% of vaccine/population ratio simply because one does not know how many waves (and booster shots) there may be. The conclusion is that incentives to share vaccines with poor countries are significantly diminished because the number of waves cannot be predicted. If we believe that we shall run through the entire Greek alphabet and more, then stockpiling vaccines is totally in the interest of the rich.

How can this be changed? There are, in my opinion, three possibilities. First, new waves might become more infectious. This, interestingly, will make α go up and rich counties more interested in sharing because they can be less isolated from the impact. Second, the world can be broken up into largely non-communicating regions. This in turn reduces the advantage to the rich country of controlling the outbreak in a poor country and makes the sharing of vaccines less likely. If, for example, a country becomes totally isolated, it has no incentive to give vaccines to anyone. Finally, and by far the best option, is to increase the production of vaccines in poor countries. This ramps up the overall capacity and does not lead to rich countries having to make the invidious choice between domestic and foreign populations. They can give everything they produce to the domestic only so long as poor countries can, and are allowed to, produce vaccines at home. To do that however requires giving up patent rights of vaccine-makers or compensating them (by the rich countries). It thus seems to me that unless we decentralize the production of vaccines, the gap will remain, and no amount of surplus in rich countries will lead them (rationally) to share vaccines with the poor.

An historical perspective of how we got where we are today in Ukraine Guido Franzinetti is Lecturer in History of European Territories, Department of Humanistic Studies, University of Eastern Piedmont. He has studied and worked in […]

Brian Milstein – The Brexit vote and Trump’s election were decided democratically. So why don’t they feel that way?

This is a brilliant piece. Once democratic institutions break down, so does democracy. The current mainstream discourse concentrates on the latter, ignoring that political parties and the media have abandoned democracy assuming there was no […]