Although explicitly about the United States, one can apply this to almost any European economy

Marshall Auerback is a researcher at the Levy Economics Institute of Bard College, a fellow of Economists for Peace and Security 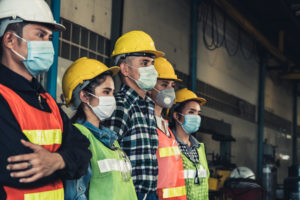 Amber and David Lapp have written movingly about the current plight of America’s workers (here and here). The commodification of labor that they describe is not new by any means. Over the last 40 years, income inequality has mounted, and workers in turn have seen their incomes and quality of life eroded, as the labor income share of GDP has collapsed. Companies have fattened profit margins by outsourcing their workforces, supported by a host of government policies that tolerated sustained attacks on unions, which in turn further diminished workers’ negotiating power and increasingly turned them into devalued “widgets”.

In many respects, the sad tale that the Lapps lay out is as old as the story of capitalism itself.  But what has proved even more shattering to those of us seeking to reform its worst aspects is the realization that both the 2008 financial crisis, and the pandemically-induced depression we are now experiencing have failed to engender a reordering of national priorities and policies in a way that would diminish the adverse trends eloquently described in their articles. Workers have not only become replaceable widgets, but increasingly disposable, as many of the jobs they once held look like they will never come back.  And the US capitalist system itself, once known for its “freewheeling, wide-open competition and creative destruction spurred by vigorous, unrestrained entrepreneurship”, has instead become “one in which powerful insider interests progressively twisted the rules in their favor, inflating their own incomes by limiting and distorting competition and blocking entry by potential rivals”, write Brink Lindsey & Samuel Hammond.

On the policy front, there is little to indicate that the new normal post pandemic will represent anything better for America’s workers. Working from home, the most prominent example of our economy adapting to the realities of a pandemic, in theory creates new opportunities and alleviates some stresses (such as the drudgery of commuting). But in practice this trend seems more likely to be exploited by companies to further commercialize workers’ leisure time (by deploying 21st century surveillance technology to monitor their at-home work habits).

For those who cannot work at home, the current crisis is likely to sustain the trend of suppressed real wages growth, with management pocket increasing shares of the national income produced as profits (and the stock market boom will fatten executive pay compensation, given how much is now tied to the equity market performance via stock options).

The now much-discussed possibility of redomiciling jobs to the home front will likely mean more automation to offset the natural labor cost advantage that developing economies have relative to the US.  But automation need not be a disaster for workers. Indeed, it could well mitigate the drudgery and monotony involved in repetitive physical labor, and likely enhance productivity as well.

The key consideration here is how the corresponding productivity gains are distributed. Labor should be able to capture the benefits of automation via better wages linked to efficiency/productivity gains, whether through reduced work hours, higher wages (as efficiency is enhanced), or some combination of the two.

This is precisely what the Finnish sociologist Paavo Seppänen proposed as early as 1967. He “outlined a “6+6” model of work sharing…in which the working day would be broken down into two alternating six-hour shifts”, according to Jacobin’s Annina Claesson. Seppänen’s views echo the political economy of the late Seymour Melman, who expressed the view that the more decision-making power that was given to factory workers, the better the factory would perform.  On a national level, Melman also contended that the more the engineers and managers of industrial firms were competent to organize production, the better the performance of the overall economy  .

Although receiving verbal support from Finland’s Prime Minister, Claesson notes that Finnish employers have resisted the concepts, because they:

“have an interest in paying (as little as possible) for hours worked, not according to productivity. A six-hour day for eight hours’ pay means a higher hourly wage. It also means a loss of control over workers — not only in terms of a smaller chunk of each day where employers control the activities of employees, but also through the implicit acknowledgment that workers should have more of a say in organizing working life.”

Unfortunately, this kind of short-sighted response also ensures that GDP gains become muted, because it means that more and more of the economy’s gains are shifted upward to an increasingly small cohort of its citizens (and the wealthier also have higher savings propensities). It also ignores the fact that labor is not only a cost variable, but a source of demand.  So, if the output per unit of labor input (labor productivity) is rising strongly, but the capacity to purchase (the real wage) is lagging badly behind – how does economic growth (which relies on growth in spending) sustain itself? Absent explicitly linking wage growth to productivity growth, it is hard to see the “new normal” economy being different from the old normal.

And something like a proposed Universal Basic Income doesn’t solve this problem because a UBI simply establishes de facto subsidy from the government, one that sustains the current system that gave rise to the problems in the first place. It makes no structural alterations to the labor market in ways that would enhance workers’ well-being and their ability to secure a larger proportion of GDP’s gains. Real wages will therefore likely remain stagnant or grow modestly, which will continue to have negative consequences for growth. To change that, we need programs to provide employment and wage agreements that explicitly link wages to productivity gains.

The debt-funded/credit expansion model that we have relied upon is in its terminal phases. It’s neither creating growth, nor prosperity for our workers, who are, as Amber and David Lapp note, increasingly being viewed as widgets, not people.  This must stop. Our new normal must not become a technology-enabled dystopian nightmare that simply sustains the old normal.  Distributional shifts towards profits of the magnitude we have seen since the 1980s are damaging to economic growth and financial stability, as well as being horribly corrosive to workers, their families, and their communities. Life cannot be as before life will not be what it was before, and a significant reorganization of economy and society will be necessary to ensure that the new normal is not simply the same as the old normal.

“If you value a source of intelligent and original analysis that doesn’t pander to corporate overlords or weak prevailing conventional wisdom, then support Brave New Europe.”

Jörn Boewe – Daimler: The Far Right on the Factory Floor

At Daimler’s main factory in Stuttgart-Untertürkheim, the far-right are represented in the works council and are attacking migrant colleagues and the metal-workers union IG Metall Jörn Boewe is a freelance journalist at the Berlin press […]