Why the Key to the Past Lies in the Future

Matthias Goldmann is an Associate Professor (Juniorprofessor) of Public International and Finance Law at the Goethe University of Frankfurt/Main and a Senior Research Fellow at the Max Planck Institute for Comparative Public Law and International Law in Heidelberg. 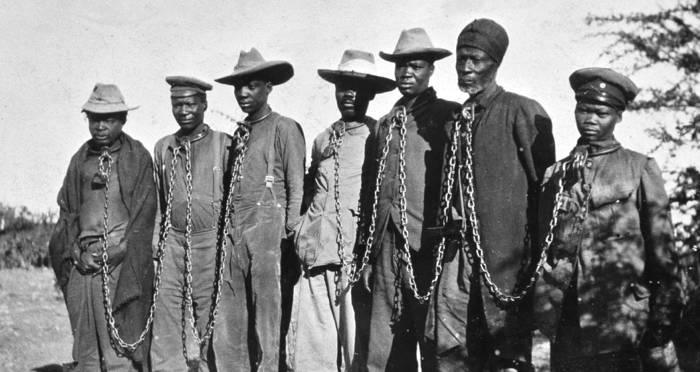 A few days ago, Namibian President Hage Geinob rejected the German government’s offer for financial compensation for the 1904-07 genocide committed by the German colonial power in what was then called Southwest Africa against the Herero and Nama peoples. The German and Namibian governments have been negotiating about the financial and political implications of this sad episode in their countries’ histories since 2015. The negotiations have been complicated not least by the fact that groups of Herero and Nama feel excluded from the process and doubt their government will act in their best interest. A suit lodged by representatives of the Herero and Nama before a New York court in 2017 has so far remained unsuccessful as the court saw itself legally obliged to grant Germany immunity from the jurisdiction of U.S. courts.

Although not many details are known about the latest state of the intergovernmental negotiations, it transpired that Germany had offered a meagre €10 million. In the past, Germany had frequently argued that the development aid it has paid to Namibia and will continue to pay in the future should also enter the equation. While no certainty exists about the sum, another issue that brought negotiations to a halt seems more important: Germany refuses to consider the payment as an act of reparation, arguing instead that it would serve the “healing of wounds”. The Namibian side considers this inacceptable, insisting that such payments should not be considered a mere act of grace.

I find this terminological dispute highly intriguing and telling. It prompts me to react with three responses.

The Many Uses of the Term “Reparations”

First, Germany’s allergic reaction to the term “reparations” is unduly focused on Germany’s recent past. This term has seen a host of different uses in the history of international law. In classical international law, before war was made illegal, the succumbing party to a war had to pay reparations afterwards. They comprised the war-related costs of the prevailing party. While heavy in financial respects, their moral implications were relatively light. Even the settlements following the First World War reflected this idea of reparations. Article 231 of the Treaty of Versailles, known as the War Guilt Clause, actually does not use the word “guilt.” All it does is to establish a legal basis for the imposition of reparations on Germany. It is also noteworthy that the official German version of the Versailles Treaty translates the word “reparations” in the title of part VIII of the treaty as “Wiedergutmachung”, indicating that at the time the two terms were used interchangeably.

During the interwar period, war became illegal. As a consequence, waging a war required a punishment. Moreover, faschism radicalized war, changing it from a means to conquer territory to a means to exterminate a dehumanized enemy. Even though one can and should distinguish crimes of war from acts of extermination, extermination became a prolongation of war (not least because of the implication of the Wehrmacht in the former that should only be revealed much later). In light of these developments, the aftermath of the Second World War required a different response. At this point, a conceptual separation of reparations and “Wiedergutmachung” occurred. Germany committed to do penance for its past by adopting a series of immaterial and material measures, ranging from re-education, the prohibition of Holocaust denial, political and military support for Israel, to the restitution of looted art and financial compensation. The 1954 Settlement Agreement therefore distinguishes between compensation (Entschädigung), restitution, and reparation. But this terminological distinction is at the same time rather specific to the German postwar re-integration into the Western hemisphere. While Germany paid compensation to various groups of victims, it paid comparatively little in terms of reparations to countries other than the allied powers. The 1954 London Agreement deferred most of (West) Germany’s reparation payments until a future “final settlement” – which never saw the light of the day. Consequently, many of Germany’s closest neighbours and allies, including Greece and Poland, have claimed reparations at various occasions after 1990. This might explain why Germany wants to avoid the term reparations at all costs.

However, such fears are inapposite. As the foregoing shows, one can reasonably distinguish the developments after the Second World War from those preceding the war. The term “reparations” as used in a colonial context does not necessarily mean the same as in the 1954 Settlement Agreement. Moreover, in the aftermath of the Second World War, the terminology is all but uniform. Many of the armistices concluded between the allied powers and countries other than Germany from 1943 to 1947 mix up reparations and compensation by stipulating that “losses will be made good.” Even the Potsdam Protocol uses reparations in a wide sense, encompassing both war damages and damages related to Nazi persecution. Most importantly, however, by locking itself conceptually into the postwar mindset, Germany misses out that reparations and redress are the terms under which compensation for colonial injustice is debated in the Global South today. Each context has, and deserves, its own terminology, and Germany should recognize it.

Why Germany Should Pay Reparations

Second, to the extent that Germany’s rejection of the term reparation is motivated by the desire to avoid the impression it was under a legal obligation to pay, this desire is informed by a one-sided legal analysis of the 1904-07 genocide. As I show in a recent paper, the German government’s view that Germany did not violate international law during the 1904-07 genocide stands on feet of clay. Germany argues that (1) the issue does not come under international law since it lawfully held sovereignty over Southwest Africa; (2) no rules of international law prohibiting such acts existed at the time. Both of these claims are doubtful. They rest on an overly narrow understanding of colonial law, depicting it as a consistent and definite practice. A sober look at colonial (international) law reveals a highly inconsistent, contradictory, and heavily disputed set of claims, reflective of the internal tensions and contradictions of colonialism, which all but easily lends itself to any definite conclusions absolving Germany of international legal responsibility. Without going into details, it suffices to point to the disputes on questions of occupation in the Institut de droit international in the 1880s to defeat the argument that the groups inhabitating Southwest Africa had not had the requisite standard of civilization to be recognized as sovereigns. Also, it suffices to study indigenous land use in Southwest Africa during the 19th century to defeat the notion that Southwest Africa had been terra nullius and that Germany could therefore have lawfully occupied it. Moreover, international law at the turn of the 20th century was not as purely positive as it came to be in the interwar period. Many scholars – and scholarship is the most authoritative legal source for that period – make ample use of early modern natural law in their textbook, citing Grotius, Vattel, and Pufendorf. Authors like Bluntschli base their reconstructions of international law explicitly on the idea of humanity. It is in this light that one needs to read the clause requiring humane treatment in the Final Act of the Berlin Conference, or the Martens Clause contained in the 1899 Hague Convention with respect to the Laws and Customs of War. The emergence of the prohibition of slavery emerging in international law during the 19th century contributes further evidence for the acceptance of a humanitarian minimum as a standard of treatment to be accorded to every individual.

Third, I believe that this hiding behind issues of legality is the symptom of a deeper malaise. Germany struggles to come to terms with its colonial past because it is undecided about its future global role. Germany showed in the aftermath of the Second World War that it can handle situations of political and moral weakness. “Wiedergutmachung” recognized and accepted that weakness. The contemporary challenge is to master a situation of relative political and economic strength. In the European context, it required three major crises during the last decade for an elite consensus to emerge on the need for greater European solidarity. Is Germany in the position, politically and morally, to find its global role and settle the reparation issue from that point of view?

The proposal to use the term “healing the wounds” suggests that it is not. To speak of healing in that context reminds me a bit of the Médecins sans frontiers. Germany is flying in as the white saviour that so many Africans nowadays despise. It is a posture that inadvertently reproduces colonial thinking. For reconciliation to work requires that we stop that kind of thinking and find a genuinely post-colonial, or decolonial, approach. Here are some ideas.

First, we should approach these countries without loading our baggage from the Nazi regime upon them. It is none of their business.

Second, we should come up with something more creative than development aid to compensate for colonial injustice. Despite its virtues, and despite the fact that colonialism sits at the root of many of Namibia’s contemporary problems of development like land distribution, development aid still breathes the air of colonial hegemony.

Third, we should take inspiration from our European past. Postwar Germany may not have paid reparations in many cases, but it gave assurance against future hegemonic domination by joining the process of European integration. That hurt some of Germany’s interests and sensitivities, for sure. For example, it came with courts claiming primacy over German law.

Sam Pizzigati: A down year for our deepest pockets?

The billionaire class lost wealth in 2022 but it didn’t put a dent in their luxury spending. More money for billionaires doesn’t buy them more things, it buys them more political power. Sam Pizzigati writes on […]

For those of you who think French politics is important but is too arcane, here is an excellent primer. Cole Stangler is a Paris-based journalist. A TV news editor, Cole also covers French politics in […]

Andrew Dowling – ‘We were playing poker and bluffing’. The crisis in Catalan independence

BRAVE NEW EUROPE is a broad church. We provide contrary analyses and opinions as long as it is based on a progressive approach. One of our first questions following the brutal suppresion of the Catalan  […]