Spain does not have a stable government, its justice system has more similarity to Belarus than a European Union member state, and all its centre-right and rightist parties can offer is revenge on Catalonia and racism. This is what happens when a political class is on the ropes – something we are seeing throughout the EU

Milford Edge is a teacher, translator, farmer and blogger at www.barbaryfigs.com, originally from the UK and long-time resident in Spain. 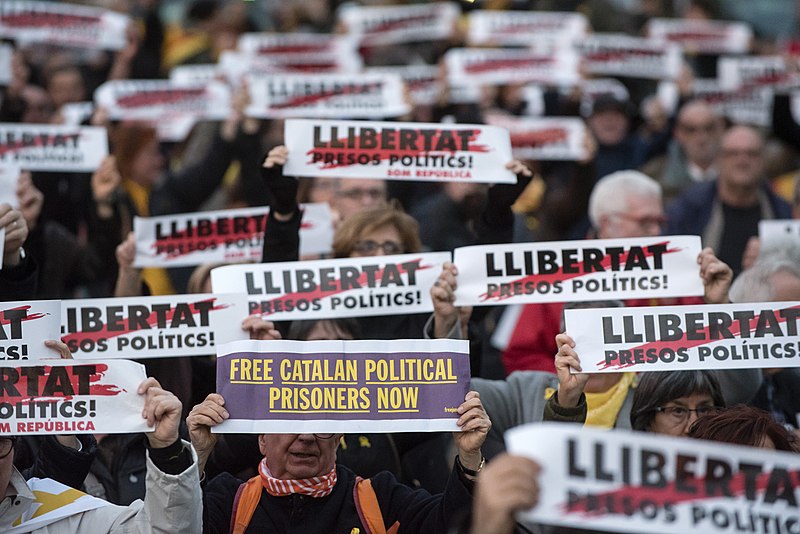 Last Friday, on the anniversary of the Barcelona and Cambrils terror attacks, the Catalan president, Quim Torra, gave a speech outside LIedoners prison in which he called on people to “attack this unfair Spanish state”. This has prompted a seemingly furious reaction from Spanish unionism.

Since then the right-wing Spanish unionist parties in opposition, the Partido Popular (PP) and Ciudadanos (Cs), have been calling for direct rule to be reimposed on Catalonia and for it to go further this time. What had the president of the Generalitat done that was so “prejudicial to the general interest of Spain”? What had he said that meant Catalonia did not “fulfil the obligations imposed upon it by the Constitution or other laws”?

Although, on the surface, Torra’s words sound bellicose, they refer to the strategy regarding the trials of imprisoned Catalan members of parliament and civil leaders on rebellion, sedition and embezzlemment charges set for this autumn. Torra is not alone in believing the trials to be a serious embarrassment to the Spanish state and the negative outcomes of the extradition cases of the Catalan lawmakers in exile have complicated matters further. He believes a more aggressive strategy is in order, to profit from a perception on both sides of the divide that the pro-independence movement is winning the legal battle.

The trials lie at the heart of a long autumn where confrontation between pro-independence and civil rights movements and the Spanish state could come to a head once more.

Torra’s words were interpreted as a threat of military action by the more hysterical Spanish media. As Catalonia has no army, the attack would presumably have to come from a section of the Mossos d’Esquadra. Wild and impure speculation. At the other end of the spectrum some titles limited themselves to reporting his words.

The political reaction has also been split. Despite describing Torra’s choice of words as “unacceptable”, PSOE vice president, Carmen Calvo, also pointed out that you cannot attack a state with phrases. The PP leader, Pablo Casado, responded with one of those utterances that must seem like a good idea at the time, and on the surface, but which disintegrates under closer inspection: “The worst moments of confrontation in history begin with phrases”.

The PP and Cs response has been more akin to that of the sensationalist Spanish nationalist press and targets Pedro Sánchez and his government. Neither the PP nor Cs has hidden its keenness for a new extended form of direct rule since before the first one was lifted in June and both parties oppose the Catalan parliament regaining full powers. Neither party needs much of an excuse to put Article 155 back on the table. In fact, Article 155 was never off the table and has never actually been fully lifted.

Although both Pablo Casado and Cs leader, Albert Rivera, are well aware of the context of Torra’s phrase, it is typically expedient of both to sell a more sinister subtext. Yet again, both are loudly calling for Catalonia to be brought under direct rule from Madrid.

Rivera said, rather ominously, that “we must remember that Article 155 is political. When we applied it last year we showed that there could be a consensus and 155 could be applied to areas such as foreign policy, or how the Mossos d’Esquadra are managed”.

Thanks to the PP’s majority in the Spanish Senate, Casado is also able to guarantee Article 155’s approval should Pedro Sánchez have the need to repeat the coup.

“Either the government of Spain puts a brake on these issues or, as I told President Sánchez, the PP will request the activation of 155 and is able to offer our votes in the Senate to enforce it”, said Casado.

(1) If a Self-governing Community does not fulfil the obligations imposed upon it by the Constitution or other laws, or acts in a way that is seriously prejudicial to the general interest of Spain, the Government, after having lodged a complaint with the President of the Self-governing Community and failed to receive satisfaction therefore, may, following approval granted by the overall majority of the Senate, take all measures necessary to compel the Community to meet said obligations, or to protect the above-mentioned general interest.

(2) With a view to implementing the measures provided for in the foregoing paragraph, the Government may issue instructions to all the authorities of the Self-governing Communities.”

The general secretary of left-wing party Podemos, Txema Guijarro, considers that a reapplication of Article 155 “is not even plausible” that the increasingly similar conservative leaders were “mouthing off”. He asserted that such a move would be “out of place” considering PSOE’s intention to restart “a dialogue with the Generalitat”.

He feels that both Rivera and Casado are aware that the reintroduction of direct rule is currently impracticable and this is just the latest example of the unseemly pissing contest that got underway on the Spanish right when Casado took over as PP leader, also in June. The two are strikingly similar in many ways and apparently unconcerned at the lack of differentiation as they fight over the same ground.

Rivera is openly saying that Article 155 of the Constitution is, more than a plank of Constitutional Law, a political tool that requires only the reconstitution and agreement of the so-called ‘bloc of 155′ – PSOE, PP and Cs. Casado is offering automatic Senate approval due to his party’s overall majority.

It is of no importance to either leader what Article 155 actually says, of course. Since its application last year the only words that have ever mattered are “take all measures necessary”. What Rivera and Casado are telling Sánchez is “let’s go again – we did it before, we can do it again”. What they are saying to the Spanish electorate is “look at us – aren’t we hard on Catalonia”.

And the excuse for this latest outburst of nationalist bragadoccio has been a little fighting talk from president Torra before this autumn’s trials of Catalan political prisoners on rebellion, sedition and embezzlement charges; the elephant in the room.

Supreme Court judge Llarena, acting on behalf of the Spanish state, has no evidence to prove any of the charges against Catalan politicians and civil leaders on remand and has been reduced to reinterpreting the law to keep them in prison. The world is watching and, with the charges discredited internationally, Spain’s Supreme Court is in a very difficult situation indeed. How can they find these people guilty without a show trial? How could they get away with a show trial?

The scandalous verdict in the case of the Altsasu 8, who were handed down sentences of up to thirteen years’ imprisonment for a bar fight with some off-duty Civil Guard, should serve as a warning of what can happen in Spain’s highly politicised judiciary.

This is precisely what Torra is alluding to: legally speaking, the Spanish state has got itself into a hole. The choice of the judicial route and the bothersome internationalisation of the crisis have thrown into relief a complete absence of separation of powers in Spain.

Many unionists have looked on in horror as judge Pablo Llarena has made a complete mess of the European Arrest Warrants in his attempt to extradite the exiled Catalan ministers due to a basic misunderstanding of European Union law and procedure, and a large dose of arrogance. It had been wrongly assumed that these cases would be resolved in meetings between politicians and diplomats.

Torra is calling for an advantage to be pressed home and for people to go on the offensive – from the political prisoner to the most lowly activist – pacifically, of course. However, Spain is always more comfortable when playing at home, where the judiciary is more amenable, and the humiliations suffered in European courthouses are unlikely to be repeated in Madrid.

Nevertheless, Spain’s credit internationally is at a low ebb and a series of trials with foregone conclusions (prison sentences of up to 30 years) are not going to do anything to improve its image, especially considering the amount of scrutiny under which the trials will come from the international community. Spanish public opinion is still controllable; a Spanish whitewash can still happen, but is that enough any more?

Furthermore, Rivera and Casado have legal problems of their own. The Senate Commission of Inquiry into the accounting and financing of Ciudadanos reconvenes shortly and party leader Albert Rivera could be called to give evidence due to the inadequate performances under questioning of his treasurer, Carlos Cuadrado, and vice-secretary general, José Manuel Villegas.

Casado himself will be appearing before the Supreme Court on charges of academic fraud – you know, that offence for which European politicians normally resign before ending up in court.

Even judge LIarena should be up in court in Belgium to respond to the lawsuit presented on behalf of president Carles Puigdemont.

Once again Spanish politicians and parties in difficulty point to the Catalans and scream blue murder, all the better to divert attention. The PP and Cs narratve is that their hard line on the Catalan question will save Spain while PSOE’s soft line will result in the break-up of the country.

In fact, there has been no shift in the Spanish government’s position since PSOE picked up the baton from the PP at the beginning of June. Remember that PSOE’s support was crucial to the successful imposition of direct rule last year and the idea that it has ceased to be an option now that they are in power is naive.

Should Pedro Sánchez need the “nuclear option” once again, he knows that he only has to snap his fingers and within days Article 155 is back in full effect.

The Catalan autumn could be very long indeed.

An international fire brigade – one way of looking at the European Central Bank – should brook no interference at the national level when it turns on its fire hose. Its ultimate arbiter is the […]

Steve Keen – The Coronavirus and the End of Economics

The free market has completely failed when confronted by the coronavirus. Steve Keen is a Distinguished Research Fellow, Institute for Strategy, Resilience & Security, UCL Cross-posted from Steve Keen’s Website Exploring Economics Commenting on the […]