Spain has not been able to overcome its fascist legacy, which has become sadly obvious in its justice system.

Milford Edge is a teacher, translator, farmer and blogger at www.barbaryfigs.com, originally from the UK and long-time resident in Spain. 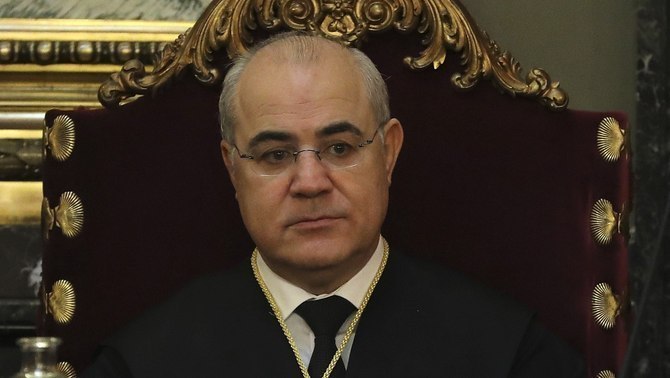 Today, the now world-infamous Spanish Supreme Court judge, Pablo Llarena, is in court in Belgium – not as a judge, but as a defendant. The Belgian court will decide whether to process the claim presented against him at the beginning of June on behalf of deposed Catalan president Carles Puigdemont and fellow exiles and ex-ministers Toni Comín, Lluís Puig, Meritxell Serret and Clara Ponsatí for his alleged lack of impartiality and consequent denial of their right to a fair trial. Damages requested have been set at a symbolic €1. None of the parties will be present in person at the preliminary hearing.

President Puigdemont’s lawyer, Gonzalo Boye, says that Llarena’s lawyer’s fee has already reached half a million euros (the Spanish taxpayer is footing the bill), and that this is just the beginning. You don’t earn half a million for a morning’s work after all, although his hourly rate is almost €1,oo0. It’s also said by many that the lawsuit will not prosper. It has less chance of prospering now that Llarena is no longer responsible for his own defence. This reduces the possibility of more basic mistakes being made, like ticking the box for “terrorism” in exiled rapper Valtonyc’s extradition case.

The civil suit relates to statements made by Llarena in Oviedo, Asturias, with regard tothe  ex-president of the Catalan parliament Carme Forcadell, civil leaders Jordi Sànchez and Jordi Cuixart, and the imprisoned ministers, in which Llarena argued that they were not political prisoners. “They are offences recognised in the penal code and, regardless of their motivation to commit them, they must be investigated”, he said. The problem with Llarena’s words is the obvious absence of a presumption of innocence. Puigdemont argued that Llarena had violated their “right to an impartial and independent judge, to a fair trial and the presumption of innocence”. The warrant was returned without being completed.

It took Llarena three weeks to demand protection from the General Council of the Judiciary (CGJP) against what he called the “planned, rude and fraudulent attack” by the Catalan exiles and their legal team. In his opinion, the summons called into question the “correctness of his work” and his defence was “the responsibility of the State for actions or omissions” in the exercise of its authority – “acta iure imperii” or acts of state sovereignty. The only problem with Llarena’s argument, and there are always problems with Llarena’s arguments, is that the claim against him was for statements made in a private capacity, not at work. It was also the first inkling that Llarena was worried about the expenses of the trial.

The Spanish Foreign Minister, Josep Borrell, intervened on his behalf at the behest of Carlos Lesmes, the president of the Supreme Court and the General Council of the Judiciary (CGJP) by involving the Spanish and Belgian embassies in a request that the Belgian State defend the “immunity of the Spanish jurisdiction” and protect Llarena, arguing that the writ “questioned the correct functioning of institutions of the Spanish State”. To consider the intervention a mere formality was just the latest example of presumptuousness by the Spanish authorities in dealing with the independent judiciaries of countries such as Belgium, or indeed Germany, Switzerland, the United Kingdom or Denmark. When no such protection was forthcoming and the Belgian judiciary responded to Spanish requests with scepticism, Llarena found himself in yet another bind in his dealings with foreign judiciaries and Borrell’s insulting supposition that diplomatic pressure could resolve a legal problem, as it would in Spain, made the minister look naive.

Within twenty-four hours, the situation was further exacerbated when the Spanish Minister of Justice, Dolores Delgado, refused to guarantee that the Spanish State would afford Llarena the protection requested and importantly foot the bill. It suddenly seemed that Llarena was on his own. However, after several days of intense lobbying behind the scenes, Pedro Sánchez’s government reversed its position. Such flip-flopping on major decisions and policies has been the hallmark of Spain’s three-month-old Socialist government. Llarena would get his Belgian lawyer and the State would foot the half-a-million-euro bill.

How has it come to this?

Llarena was the judge chosen to take over the cases against pro-independence leaders by José Manuel Maza, at that time the Attorney General of Spain and inventor of the “violence” narrative based on the imaginative “potential for violence” concept. Llarena took the baton with unquestioning pride and immediately set about the immense and complex task of jailing the Catalan government based on the loosest imaginable interpretations of the rebellion and sedition laws – they hadn’t been used since the regime of the fascist leader Franco, and certainly not since they were edited in 1995 to include the concepts of “violent” and “tumultuous” to any kind of uprising. All were aware that this was stretching credibility, but, in fact, it was all they had and they were going to have to run with it. They would just have to find the violence and tumult somewhere. This was never going to be easy as the pro-independence movement is avowedly pacifist, and has been throughout its modern incarnation.

Both the last rightwing Partido Popular (PP) government and Spain’s Supreme Court have been on thin ice since the beginning. The choice of a legal rather than a political course with such flimsy foundations was asking for trouble, but both the PP and the judiciary felt they had sufficient control of the political situation in Spain to bluff the charges through. The choice of certain members of Puigdemont’s sacked government of exile over pre-trial imprisonment threw another enormous spanner in the works.

Llarena has shown himself to be completely incompetent regarding the European Arrest Warrants – issuing them, withdrawing them, reissuing them, then withdrawing them again. Llarena has seemed surprised that the judiciaries of countries such as Belgium and Germany will go through due process before making decisions. It’s as if Llarena and the PP just expected the Catalan ministers and MPs’ extradition to be automatically granted and executed, as if the Spanish diplomatic service would be able to bully other governments to intervene on their behalf in the tradition of Spanisch fascsim. The error has now been repeated by Spains social democratic PSOE.

The refusal by the German court in Schleswig-Holstein to extradite Puigdemont for rebellion and sedition was due to a lack of equivalency between the German and Spanish penal codes and the subsequent withdrawal of all arrest warrants – to extradite Puigdemont on the less serious charges of misuse of public funds would be possible but it would not be possible to try him for rebellion or sedition on his return. This brought cries of pain and humiliation from Spain and calls for the country to withdraw from Schengen. The danger of Spain turning its back on European law and authorities remains a real possibility.

As usual, Llarena and company were genuinely shocked by this result. The defence lawyers for the exiled politicians were less surprised. In fact, based on purely legal arguments, they had repeatedly warned Llarena about this possible outcome. Llarena hadn’t listened or changed strategy, and now the flimsy cases of rebellion and sedition against all those charged are even more untenable than ever.

This is why the State argues that this case against Llarena challenges the “independence” of the Spanish judiciary. Having to try and extradite exiles charged with the same offences as the politicians and civil leaders in prison was always a risky strategy and unless European judges rolled over timidly to undiplomatic Spanish pressure, there was another inevitable train crash on the cards – in this case between national judiciaries within the European legal framework.

It is a monumental mess and the only way the Spanish judiciary can keep the Catalan ministers and civil leaders in jail is by holding show trials – for all the world to see – and handing down the sentences they damn well please. The panel of presiding Supreme Court magistrates is in an advanced stage of preparation, the pieces are in place, it will just take a historic effort of barefaced nerve, guts and gall.

If we look at the data, it becomes clear that poor countries are developing rich countries, not the other way around Jason Hickel is an anthropologist who works on political economy and global justice. He […]

Andrea Capussela has the courage to address probably the greatest threat to democracy in Europe: corruption. One can safely claim that in Germany there is hardly a major law or government contract, which is not purchased […]