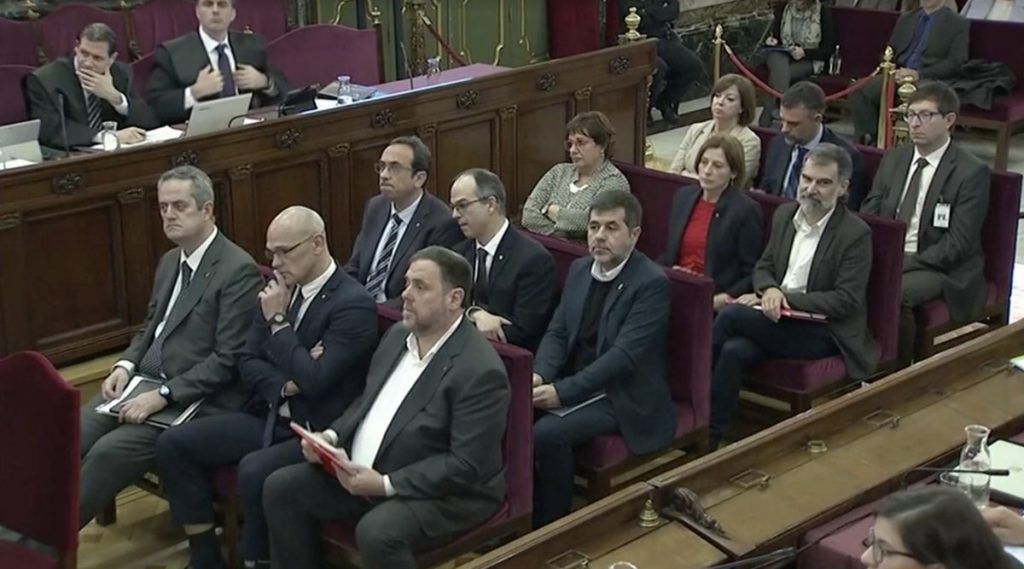 One year has passed since the Spanish government officially pardoned theCatalan politicians responsible for calling the Independence Referendum in2017. In 2019, nine of them had been sentenced to up to 13 years of prisonon charges of sedition. Perhaps it is worthwhile analysing what led PMSánchez to grant those pardons and see what the consequences have beenfor the resolution –or dissolution?– of the Catalan conflict to this day.At no time should it be overlooked that Sánchez’s decision coincided withthe passing of a severe Council of Europe report regarding Spain’streatment of the Catalan conflict. Though never publicly admitted, thisreport must have acted as a considerable prompt (and embarrassment) forMadrid in the sense that it openly compared the abuse of the rights ofpolitical opponents in Spain with those occurring in Turkey. It spoke of thetreatment given to the Catalan independentist politicians who had receivedhefty prison sentences for “sedition” and other seemingly arbitraryaccusations. The report, written by Latvian socialist Boris Cilevics, called forthe immediate release of these prisoners. And surely enough, they were setfree three days later, no coincidences there. Many saw this step asSánchez’s only way out to respond to CE pressure at the same time as amethod of muffling the wave of indignation the pardons would cause in acountry where the media and politics had long been demonizing the Catalan“criminals”. Sánchez sold his “pardons” –though partial and repealable- asan end to the conflict and a gesture of magnanimity forced upon him by theEuropean Council.

But it would be false to believe that the list of measures demanded ofSánchez in the CE report had been even partially respected (as Cilevics hasannounced would soon be reported before the Legal Affairs and HumanRights Committee of the Parliamentary Assembly of the Council of Europe).One of the major demands the first report had made was that all forms ofrepression exercised against the independence movement be interrupted.Today it is plain to see that no steps have been taken to interrupt Spain’sjudicial machinery as it continues to prosecute activists for participating indemonstrations in favour of Catalan independence and against repression.So far some 3500 have been investigated, questioned or tried (more than60 with Pegasus.). The CE report originally centred on the lot of jailed politicians, both in Spain and Turkey. In the caseof Spain, it called for the suppression of “sedition” as a penally punishableoffence. It called for an end to the suspension of politicians for merelyhaving shown solidarity with those repression hade been applied against, aclear reference to the suspension of president Quim Torra. It also called foran open and constructive period of dialogue with all the political forces inCatalonia. None of these demands have been met.

It is in this last chapter that Spain’s contempt for the report is most evident.No serious attempt has been made by Madrid to create the conditions forserious talks. Past meetings can be defined as anything but seriousnegotiation exercises to solve the Catalan conflict. Many observers see itmore as part of a strategy to lull the independence movement back to sleepwith the connivance of some formerly independentist sectors, including

ERC. Indeed, one of this party’s more outspoken leaders went so far as tocall President Puigdemont a “nutter” for having declared independence inOctober 2022. One further criticism made by the report was that theSpanish authoriities should not demand that Catalan political prisonerspublicly renounce their beliefs to gain an official pardon. Indeed, theseshortcoming became most evident when the terms for their pardon werelaid down by the Supreme Court. Furthermore, in political and mediacontexts, the Spanish authorities have not been seen to make any attemptto put an end to the ongoing hate speech deployed against Catalan politicalaspirations which are never debated in any form of equality on the officialSpanish media. This phenomenon, one which any democratic society wouldsurely seek to check, was especially present in the recent Andalusianelections where slanging the Catalans seemed to be one of the major vote-pullers.

In none of these demands made by the Council of Europe have the Spanishauthorities made any concessions other than the physical release of the 9government members. Without doubt, Spain would have come under muchpressure to keep them in jail. This factor alone should be seen as defiant bythe Council of Europe. But what must surely cause most alarm is the factthat steps are being taken by Spain’s Supreme Court to actually revise theconcession of these pardons. In the last year, Spain has not only made noattempt to create the conditions to enable negotiations for a reasonablesolution to the Catalan conflict, as the CE called for, but now the threat toreadopt the repressive methods used against the Catalan Procés are comingcentre-stage once again. Could this indicate nerves over the fact that theconflict, though latent, just refuses to fully evaporate away? Could it be thatthe unilateralist developments in Scotland are making Madrid uneasy?

Sadly enough, despite the fact that a minor European institution is prickingSpain with a toothpick, the fact that the all-powerful EU and its judicialinstitutions are patting one of its dearest pet member states on the back, iswhat matters. Turkey and Spain need have no fear that their democraticdeficiencies will penalize them in Europe in the near future. So far, only non-EU Andorra has dared to have a go at prosecuting Spain’s leading politicians(PM Rajoy and ministers Montoro and Fernández Diaz) for their mafiosobehaviour during the Catalan conflict. But that, of course, was for havingdestroyed an Andorran bank (Banda Privada d’Andorra) and not for trivialissues assoiated with morality or democratic standards.

Support for Eurosceptic parties and the rise of populism threaten not only European integration, but peace and prosperity on the continent more broadly. Rather than attributing their rise to the individual characteristics of voters – […]

A good piece on inflation and what causes it. Far from a problem, moderate rates of price increase signal a healthy, expanding economy. John Weeks is PEF Council Coordinator, Professor Emeritus, School of Oriental & […]