Carbon sinks such as forests are taken for granted and assumed to be a panacea, but once again the EU has no plans for increasing or maintaining these

The Öko-Institut (Institute for Applied Ecology)  is a non-profit, private-sector environmental research institute in Germany 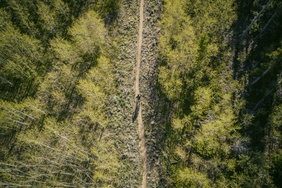 The management of forests, cropland and grassland impacts on the amount of greenhouse gases in the atmosphere. These activities must therefore be taken into account in the EU’s Climate Target Plan. The EU Parliament and the European Council are currently arguing about the “how”. The outcome of this debate will decide whether the climate target overall will be more ambitious or whether it will in fact be watered down.

This is due to the fact that the way habitats such as forests, peatlands or grasslands are used determines whether they are net sources of greenhouse gases or natural carbon sinks which draw down CO2 from the atmosphere and store it in the form of carbon in plants and soils. Sustainable forest management, forest restoration and preservation, or conservation and restoration of organic soils under cropland and grassland are among measures contributing to the expansion of the EU’s natural carbon storages, allowing them to fulfil their important functions in the climate system and promoting climate change adaptation. Moreover, they will help to safeguard biodiversity – a key objective of the EU Biodiversity Strategy.

In a brief analysis for Greenpeace Germany, Oeko-Institut discusses options for a target for natural carbon sinks in the European Union. In addition to the potential for carbon sequestration, the study analyses the contributions as well as the conflicts arising from an enhancement of carbon sinks with respect to the EU strategies for the expansion of renewable energies, climate change adaptation and biodiversity conservation respectively.

The EU is committed to reducing its climate-damaging greenhouse gases by at least 55 percent by 2030 compared to 1990 levels, with the ultimate goal of becoming climate neutral by 2050. The EU Commission is currently planning to include the Land Use, Land Use Change and Forestry (LULUCF) sector in this target and has also taken this into account in its updated contribution to the Paris Climate Agreement.

In 1990, the LULUCF sector’s annual net carbon removal in the 27 EU Member States stood at 275 million tonnes (megatonnes, Mt) of CO2. While the net increase in carbon storage through sinks peaked at 355 Mt CO2 per year in 2006, it has since declined again to 280 Mt CO2 per year in 2018 – roughly the same level as in 1990. Nevertheless, other sectors may be allowed to emit an additional 110 Mt of CO2 equivalents in 2030, or about two percent of the EU’s 1990 emissions, simply due to the sink‘s inclusion in the climate target.

Therefore, the climate target needs to be tightened to align the EU’s targets with those of the Paris Climate Agreement, while a separate target should also be set for carbon sinks. This should help to create incentives to increase natural sinks, but also to improve their overall situation by means of ecosystem restoration and conservation. The EU Commission is currently examining whether the current rules for LULUCF, which do not take integration into account, need to be adapted.

By 2030, natural sinks in the EU could annually store between 400 and 600 million tonnes of climate-damaging greenhouse gas emissions. The EU needs to define legally binding, enforceable, quantitative, national targets as a framework for the development and protection of carbon sinks. Moreover, precise accounting and reporting rules are needed, as well as social and environmental sustainability criteria for these sinks.

Sinks are generated by biomass growth, which results in the long-term storage of carbon in vegetation and soils and in products such as furniture or construction timber. At the same time, however, emissions are also released due to the utilisation of biomass, by intensive farming practices, and as a result of deforestation, cropland and grassland conversion, for example for the construction of new residential areas or other infrastructure.

“If we protect old-growth forests, restore peatlands or give protected status to coastal ecosystems such as salt meadows, we ensure that they are less affected by pests or become more resilient to extreme climate events such as storms,” explains Judith Reise, a researcher at the Oeko-Institut. “This simultaneously grants them more space and increases their capacity to absorb and store more carbon. This is a win-win situation for both species protection and climate change mitigation.”

The study also gives an overview of the situation of ecosystems of conservation concern in the EU. For example, forests of the 27 EU Member States and the UK today cover an area of 167 million hectares. They contain biomass that stores a total of 9.8 gigatonnes of CO2. But forests in particular are strongly exposed to disruptions resulting from climate change. Storms and droughts, for example, cause trees to die and allow pests to spread more easily, thus destroying even more plants. Estimates suggest that such disruptions will result in European forests storing 180 Mt less CO2 annually in the 2021-2030 period. The net forest sink will thus shrink by more than 50 percent.

In addition, forest fires release large quantities of previously stored CO2. Forest fires in Portugal and Italy, for example, released a total of about 23 Mt of CO2 into the atmosphere in 2017, equal to roughly 40 percent of the size of the forest carbon sinks in the two countries in the years prior.

Frances Coppola – The sinking of Voyager

The continuing saga of crypto currencies and their steady decline Frances Coppola is the author of the Coppola Comment finance and economics blog, which is a regular feature on the Financial Times’ Alphaville blog and has been […]

Ann Pettifor – The financialisation of the housing market

Sky.rocketing house prices have nothing to do with a shortage of housing. It is the result of speculation. To make matters worse, property has become financialised, thus converting it from a place to live and […]

Uber seeks to claw back costs from accepting worker status for UK drivers by increasing its commission paid by its longest-serving drivers The Gig Economy Project, led by Ben Wray, was initiated by BRAVE NEW […]