As Cockburn, like most Brits and Americans, does not take  the EU and its member states  seriously, he has kindly not mentioned it. This is really about the political class of the G7 nations plus EU 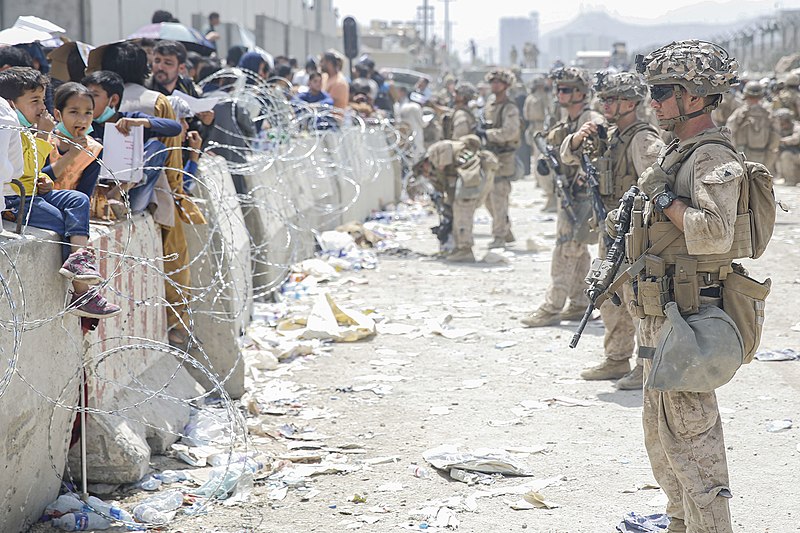 They shall not return to us, the strong men coldly slain
In sight of help denied from day to day:
But the men who edged their agonies and chid them in their pain,
Are they too strong and wise to put away?

Shall we only threaten and be angry for an hour?
When the storm is ended shall we find
How softly but how swiftly they have sidled back to power
By the favour and contrivance of their kind?

Their lives cannot repay us – their death could not undo –
The shame that they have laid upon our race.
But the slothfulness that wasted and the arrogance that slew,
Shall we leave it unabated in its place?

– from ‘Mesopotamia’, by Rudyard Kipling

Rudyard Kipling’s savage denunciation of the British politicians and officials responsible for the disastrous First World War campaign in Mesopotamia (modern Iraq) exactly describes the uncaring incompetence of those supposedly in charge of the shambolic British evacuation from Kabul in Afghanistan in August.

Among those abandoned “in sight of help” was a man whose nine-year-old child was no longer breathing after being crushed in the crowd of 25,000 desperate people trying to escape the Taliban. A senior military officer friendly to the British returned to Kabul expecting to be murdered because he would otherwise have had to leave behind several of his children who did not have the right documents. Even if they had received them, they might have failed to get inside the airport through the milling crowds because no buses had been arranged by the Foreign Office.

As for the “slothfulness that wasted and the arrogance that slew”, what better exemplar could there be of these two lethal qualities than the then foreign secretary Dominic Raab? He extended his holiday in Crete at the height of the crisis, and was culpably out of his depth when he finally returned. Raphael Marshall, the Foreign, Commonwealth and Development Office whistle-blower, told the Commons Foreign Affairs Committee how Raab had said “he would need all the cases [for evacuation] set out in a well-presented table to make decisions”.

About this crazed disengagement from reality, Marshall says mildly that the foreign secretary “did not understand the desperate situation at Kabul airport”, though a glance at a television would have shown him the chaos and panic.

But Raab was not alone in his inactivity. The head of the diplomatic service, Sir Philip Barton, began a three-week holiday on 9 August and, despite the fall of Kabul to the Taliban on 15 August, did not return to the Foreign Office until 28 August. He told the committee he had since “reflected carefully on this” and accepted retrospectively that his decision to stick to his bucket and spade during the crisis, the culmination of a 20-year war in which 457 members of the British forces had died, was a mistake.

The excuse for their absences offered by both men during the last agonies of Afghanistan is that their presence in Whitehall would have made no difference. This self-serving admission of ineffectuality would be comical, even if it was true – but it is contradicted by Marshall in his detailed statement about the failings of the Foreign Office in August. Ignorance of Afghanistan was total in his team, the leader of which at one moment “did not know that the correct term for people from Afghanistan was Afghans and referred repeatedly to ‘Afghanis’”.

But Marshall’s evidence also makes clear that little expertise was needed to at least look at the emails of tens of thousands of Afghans trying to escape the Taliban, which remained unread. The main failure was lack of manpower, which could have been swiftly mobilised from within the civil service as a whole. This did not happen because of the lack of direction from politicians like Boris Johnson and Raab and senior civil servants such as Barton and other Foreign Office mandarins.

This failure of leadership which produced the fiasco of the evacuation – and Marshall makes clear what an unnecessary mess it was – has broader implications. Is it one more symptom of the hollowing out and decay of the British state? Is not the situation now worse than in Kipling’s day? He snarled at the way that the guilty authors of a calamitous campaign had “sidled back to power” due to their political friends and connections.

Contrast this with their modern counterparts who, however much they blundered in Afghanistan, are not sidling anywhere fast because they do not have to. They still hold important jobs and express little contrition about the Afghans left behind. Kipling said that it was not enough “to be angry for an hour”, but this time round public outrage did not even last that long. The botched evacuation scarcely makes the list of scandals engulfing, and possibly capsizing, the Johnson government.

But stupidity, ignorance and incompetence seldom explain everything in any failure. Joe Biden, Johnson and their senior lieutenants say that they and their intelligence services were wrong-footed by the unexpected speed of the Taliban advance and the Kabul government collapse.

But this does not quite explain why so many decision makers went away on holiday and stayed there. Barton departed just two days before the Foreign Office concluded that Kabul was about to fall to the Taliban and blithely continued his vacation when the Afghan capital fell. I suspect that what really explains the lackadaisical attitude of American and British main players was that they did not expect the last days of the Afghan war to make such a splash. After all Afghanistan had never attracted as much media attention as the Iraq war. Nobody had paid much attention to Donald Trump’s agreement in 2020 to abandon the Kabul government and do a deal with the Taliban which Biden unwisely decided to fulfil to the letter in 2021.

What caught so many experienced political players with their pants down was that they did not foresee that the last gripping but appalling scenes of the Afghan war would be played out night after night in front of the television and phone cameras outside Kabul airport. They were transfixed and did not know what to say or do as people in the rest of the world, for almost the first time, could see the grisly tragedy unfolding before their eyes and – in the US at least – were looking for somebody to blame.

Lost in the melodrama of the last days at Kabul airport were any longer-term lessons that might have been learnt. In recent years, the US and UK have been trying to wage war on the cheap, at least in terms of their own armies. They withdrew almost all their ground troops and relied on the Afghan army, supported by their air power, to hold the cities, big towns and main roads. But this strategy ceded much of the Afghan countryside, where 70 per cent of Afghans live, to the enemy. Once American air power was withdrawn, Taliban fighters closed in for the kill.

As atomic energy gets ever more difficult to afford and renewables become steadily cheaper, a nuclear sunset awaits plans for new plants. Paul Brown, a founding editor of Climate News Network, is a former environment […]

We have seen a similar move as Germany’s Green economics minister Robert Habeck went to kowtow to the dictator of Qatar. Patrick Cockburn is the author of War in the Age of Trump (Verso) Cross-posted from […]