This is a bit late, but is the only objective article we could find concerning the recent Catalan elections. 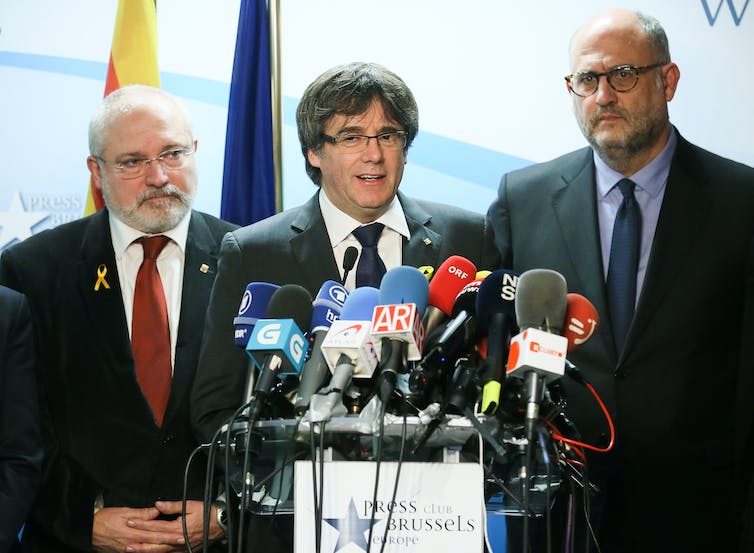 It wasn’t supposed to turn out like this. When the Spanish prime minister, Mariano Rajoy, dismissed the Catalan government in Octoberand called a snap election, he anticipated that anti-independence parties would obtain a majority. The plan was to return Catalonia – and Spain – to “normality”.

Given that several prominent pro-independence figures, including former president Carles Puigdemont, spent the campaign in self-imposed exile or in prison (the former deputy prime minister Oriol Junqueras remains behind bars) the gamble appeared justified. Instead, the pro-independence bloc retains its overall majority, obtaining 70 of the regional parliament’s 135 seats – only two fewer than in the last regional election in 2015.

Puigdemont and Junqueras decided at the start of the campaign not to repeat their 2015 alliance Junts pel Sí (Together for Yes). This now appears shrewd. Their total number of seats increased by four to 66. The weak link in the pro-independence chain was the Candidatura d’Unitat Popular (Popular Unity Candidacy – CUP), the uncompromising anti-capitalist party which has enjoyed considerable influence during its five-year existence. It now has just four representatives, six fewer than in 2015.

Rajoy’s Popular Party (PP) obtained its worst result in Catalonia, losing eight of the 11 seats obtained in 2015 and haemorrhaging more than 165,000 votes.

However, the anti-independence Ciudadanos (Citizens), led by Inés Arrimadas was the party that actually fared best. The centre-right party obtained more seats (37) and votes (1,100,000) than any other party, having benefited most from the collapse in PP support. Arrimadas’s presidential hopes were only dashed by the relative failure of the other parties opposed to independence. The Catalan Socialists (PSC) won a disappointing 17 seats (one more than in 2015).

Podemos’s Catalan variant, Catalunya en Comú–Podem (Catalunya in Common – We Can), was punished for an ambiguous position on independence which verged on cognitive dissonance. Its calculation that it could be a power broker after the election seems to have been misguided as the party retained just eight of its 13 seats. A geographical divide within Catalonia was also reaffirmed as support for independence was much lower in Barcelona than in the region’s other three provinces.

A leader in exile

Shortly after the results were announced, Puigdemont, speaking in Brussels, claimed – with some justification – that Rajoy had designed the election to take place in such a way as to assist the anti-independence cause. Instead, the overall majority in favour of independence has been reaffirmed.

Puigdemont’s own position in the aftermath of the election will now be the focus of speculation. He might understandably regard himself as the obvious candidate to be Catalan president but he is likely to be arrestedshould he return to Spain. Another key issue is the continued application of Article 155 of Spain’s constitution, suspending devolved powers. Whether it remains in force until the formation of a government in Barcelona remains to be seen.

Arrimadas has reminded her pro-independence opponents that her party actually won the election and indicated that she would strive to form a pro-unionist coalition. She nevertheless conceded that the electoral arithmetic meant that such a coalition would be difficult to achieve. The anti-independence bloc will nevertheless be relieved that its opponents once again fell short of 50% of the vote despite a remarkably high turnout of just under 82%.

Given the blow dealt to his credibility, Rajoy may now even consider bringing forward a general election – which is not officially due until mid-2020. The campaign would inevitably be dominated by the Catalan question and, beyond Catalonia, Rajoy’s uncompromising stance has been popular. An early vote would also provide him and those in favour of maintaining Catalonia’s status within Spain with a mandate from the electorate.

But early elections are not without risk. The shift from Rajoy’s Popular Party to Ciudadanos in Catalonia may spread to Spain. It might be argued that Catalonia was never a stronghold for the Popular Party in the first place, but the scale of the party’s collapse at the hands of Ciudadanos raises questions about Rajoy’s credentials. Is he really the figure best-placed to solve the constitutional crisis in the long term?

A further concern for Rajoy is that the European Union might even begin to reconsider its stance on Catalonia in the light of the election result. Thus far, the EU has unambiguously backed his anti-independence stance. The fact that those parties wishing to break free from Spain undeniably attract significant support may cause as much unease in Brussels as it does in Madrid.

For the pro-independence bloc, there is solace in the fact that it won most seats even if it failed to break through the crucial 50% threshold across the region. Within the anti-independence ranks, Ciudadanos obtained more than a quarter of the vote and more seats than any other party. Arrimadas has established herself as a key political figure who is more capable of attracting support in the region than the Popular Party, the Catalan Socialists, or the Catalan branch of Podemos, all of whom have been left with much to ponder.

Nevertheless, no party or bloc can claim outright victory. Whereas Rajoy hoped that the election would ultimately serve to catch the independence bloc on the wrong foot, he has instead entrenched further division. The absence of a clear way forward is of concern. Catalonia and Spain remain in crisis.

Eurozone finance ministers reached a preliminary agreement on a reform of the European Stability Mechanism in June, but failed to conclude it last week. The reform is now set to be discussed during the European […]