For those of you that have spent your week on the picket line, and for those of us who are supporting this strike because we received good university educations from dedicated and content staff and wish the same for our children and  our children’s children, some thoughts from Phil Leeke. 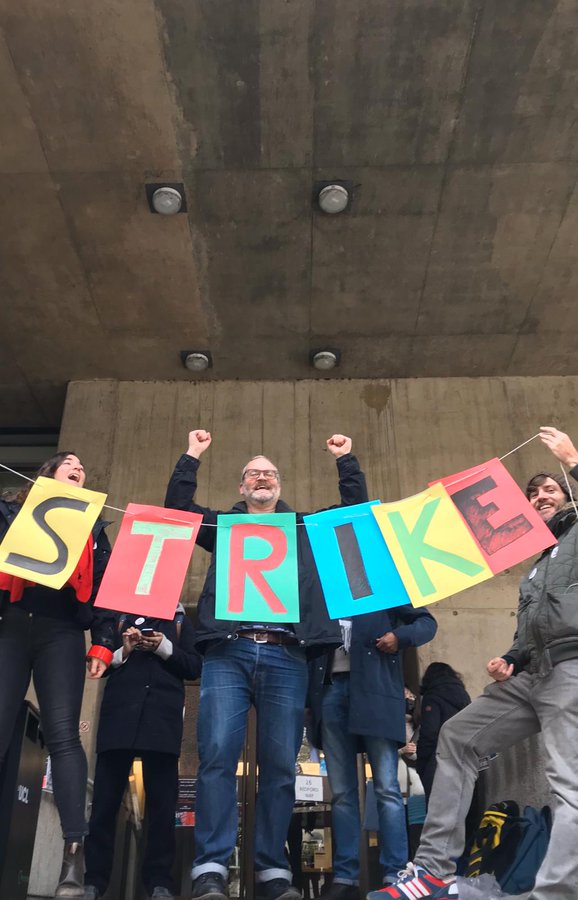 In my last piece (here) on the university strike I said that workers were fighting for the very soul of the university as well as their pensions. A grand claim like that needs to be unpacked. I also said that in aggressively marketising certain public goods like education, degradation will be the result. This is Sandel’s argument in: What money can’t buy? The moral limits of Markets. I would like to elaborate upon it in a more discursive form. Our morale is strong and so is our solidarity. Our students. Our overburdened and financially strapped students have been wonderful in their support. It has been humbling. So let’s get back to the claim. What’s wrong with aggressively marketising education? To be pre-theoretical? Just about everything.

Modern marketised universities (as opposed to the clubbable and cosy institutions imagined by Cardinal Newman and readers of the Daily Heil) produce different discourses which make strange bedfellows. There is a slightly Stalinist discourse about long term ‘plans’ and ‘strategies’ and there is stuff about ‘visions’. So we have the sacred and the profane. ‘Mission’ statements and ‘visions’. Years ago, I too had visions. At Glastonbury. Lying on my back. Honestly, I have to say they were quite inspiring. Colourful too. And that’s what we are supposed to be isn’t it? Inspiring. Colourful. That’s what we are supposed to be doing isn’t it? Lighting a fire, turning up a flame? The usual pyrotechnic metaphors. Sadly, there is nothing very inspiring or ambitious about the ‘visions’ produced by many universities. Years ago, a friend of mine went to teach at a Buddhist University. There were some courses he had to take. One had ‘bliss’ as a ‘learning outcome’. Seriously. It really did. I realized there was something wrong with me when instead of some kind of synonym for bliss—bliss may be a big ask and I’d actually settle for contentment— I ended up writing ‘Being able to function more efficiently in the work place’ as a ‘learning outcome’, and on a course I was teaching.

It was on Moby Dick. And really, somebody should have slapped me in the face with a wet fish. “Don’t write such gaseous blather!” they should have said. ‘Being able to function more efficiently in the workplace’ sounds, on reflection, to be the type of outcome more suited to a slave. Or possibly a ball bearing. It wouldn’t have inspired me. So why would it inspire them?

Some would argue that the employability discourse produced by universities is inevitable and impossible to row back on because of the background of fees and austerity. I feel this is simply untrue because work is not nearly as important as most of us think. Heretical gasp. Check your privilege, I hear you say. I acknowledge this, but a universal basic income might be a starting place to get beyond ‘work’ since ‘air’ is rather more important than ‘work’. As in the air that you breathe. As in the air that—if you live in a city—is slowly killing you. You wouldn’t eat shit, so why would you breathe it? It is also important to be able to walk on solid ground. Trust me, my home town is currently flooded and has been for some time. I cannot walk on water. The deeper values and purpose of a university connected to the environment, the planet and what it means to be human does not, however, mean that pensions are unimportant. Unsexy yes, but unimportant no. For example, and because of my completely inadequate one, I have calculated that I will be able to retire when I am ninety-six. When that joyous day occurs, I will be able to settle down and finally start to live. I may take up Mixed Martial Arts (MMA) or even jump out of a plane. I don’t know yet. I may, however, also need to supplement my income with a part time job. “Working from home in the home” etc. I plan to supplement my income through the production of a contract cheating site. Market based philosophies have opened the door for wonderful opportunities like these. “Your writer”, I will inform potential “clients”, has seventy years experience as a university teacher. And offers only the gold or platinum level of service.

As well as marketisation, there is another worshipful discourse on leadership perpetuated by universities. Archie Brown punctured that self-serving idea in his ‘The myth of the strong leader’. A pity so few people seem to have read it. There are quite a few strong leaders out there right now. Oh reader, you would not wish to follow where they would lead. It is a sunless place full of rancor and alarm. At universities, leadership discourse is produced by the people in ‘steerage’. And on this particular boat, they are at the top and not the bottom of the ship. Steerage people ‘steer’ the university. They are charged with plotting a course. They have “visions”. Now, I won’t make jokes about Mr Magoo wearing a cockatoo for a hat and picking up a lobster instead of his phone, but, seriously, where are we actually going? What is the deep purpose that we have and why have the people in ‘Steerage’, skimped on the rivets? The rivets in this case being the support staff, the cleaners, the academics and the teachers and all the PEOPLE who actually HOLD the ship together! Is it because we are, so to speak, below the waterline? Or below theirs anyway. Is it because they exist ‘on transmit’ and don’t actually listen? Just what is it that Senior leader Mr Thomas Gradgrind and his trusted advisors Nick Machiavelli and Baltasar Gracián are actually thinking? That they won’t notice when the rivets snap crackle and pop? That they won’t notice the water lapping at the doors of that infamous grace and favour cabin— ‘The Vatican of Swag’? Even as we speak, I am willing to bet they are having thought leadership sessions in the C-suite. I just hope this thought isn’t of the most shameless ways of undoing an opponent. I hope it isn’t of an expedient and manipulative kind. I hope it isn’t of some future imponderable that they are hoping to spin. I hope they can finally understand that– the– water– is– coming– in!

Being a veteran of modern life, however, I won’t hold my breath. They may just be equipping the lifeboats.

The strike enters its fourth and final week on coming Monday. We wish you all the best and send our solidarity – The Editors of BRAVE NEW EUROPE

Populist parties on both the radical right and left of the political spectrum in Europe have made considerable electoral gains over the last decade, but they have done so using notably different approaches. Valerio Alfonso […]