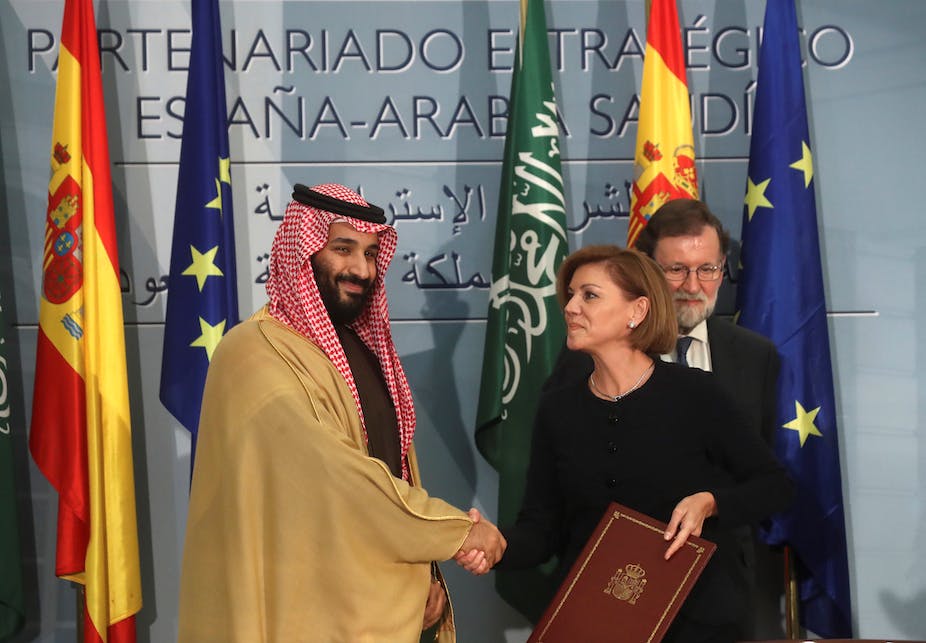 The Spanish government recently found itself confronting a deeply unpleasant dilemma: whether to help prevent violations of the law of armed conflicts or protect thousands of jobs at home. On September 3, the radio station Cadena SER reported that the minister of defence, Margarita Robles, intended to stop the delivery of 400 bombs to Saudi Arabia, whose bombing campaign in Yemen has claimed numerous civilian lives.

While Robles’s choice is consistent with the law on international arms transfers, it could seriously affect her government’s commercial relationship with the Saudis while undermining the jobs of thousands of Spanish workers involved in the defence sector.

The deal at the centre of the issue was signed by Spain and Saudi Arabia in 2015 during former prime minister Mariano Rajoy’s conservative government. By the time Pedro Sánchez’s current progressive government took office in June 2018, Saudi Arabia had spent three years bombing Yemen, causing numerous civilian casualties. Robles, a minister in the Sánchez government, seemed concerned by the possibility that Spanish armaments might be used in the conflict at some point.

Immediately after her intentions became public, Spanish media reported on the Saudis’ alarmed reaction and the future of other Saudi-Spanish deals. Top of the list was a contract for five warships to be built by Navantia, a Spanish state-owned company. Cancelling that order would have cost €1.8 billion and left 6,000 workers unemployed. While there was no official statement by Saudi Arabia, Robles’s idea concerned other Spanish politicians. Susana Díaz, governor of Andalusia, demanded the government defend the jobs that might have been affected.

This disquiet triggered the involvement of the entire Spanish government – and before long, Robles made a statement before the Defence Commission of the Spanish Senate on September 10. In it, she denied that the shipment of bombs had been suspended, claiming that the transfer was solely under examination by her ministry.

In just a week, then, forced to consider the consequence on Spanish economy of the decision to cancel the transfer of armaments to Saudi Arabia, Robles withdrew her plan.

Since March 2015, Saudi Arabia has led a coalition of countries in a military campaign against Houthi rebels who had taken control of parts of Yemen. Since then, Saudi-led air forces have bombed the country on a massive scale, often claiming far more civilian lives than could be reasonably be considered “collateral damage”.

In August 2018, an International Committee of the Red Cross representative in Yemen put it bluntly: “this lack of respect for civilian life and civilian property is reprehensible”. The same month, a group of experts appointed by the United Nations High Commissioner for Human Rights considered the violations of international law in the conflict. They reported that the majority of the civilian casualties were caused by the Saudi-led coalition’s air strikes, which appeared to frequently target civilian targets such as “residential areas, markets, funerals, weddings, detention facilities, civilian boats and even medical facilities”.

International law prohibits intentional attacks on civilians during a conflict, and requires that appropriate precautions be taken to reduce accidental civilian casualties. Any failure to abide with these rules amounts to a war crime.

Since the 1990s, the norms of the international arms trade have been entwined with the obligation to respect international law. Within the European Union, the subject is regulated by an EU Council Common Position that prohibits the transfers of arms that would be used to commit serious violations of the law of armed conflicts.

Article 6 of the 2013 Arms Trade Treaty prohibits transfers when the supplying state knows that the weapons would be used to attack civilians or to commit other war crimes. The treaty also holds that, before authorising an arms export, states must assess the potential risk that they will be used to commit serious violations of the law of armed conflicts.

Considering the frequent involvement of civilians and the targeting of civilian environments, states should hesitate to transfer arms to the Saudis. This means Robles’s concerns over Spain’s 400 bombs were every bit in line with the norms and laws of the international arms trade. Yet even though current international and European law provides legal arguments to support governments who move to stop dangerous arms sales, her move to bring Spain more closely in line with that law was stymied.

It’s just another grim reminder that whatever international law is in place to try and spare civilian lives in armed conflicts, money and business too often come first.

The progressive pieces are coming together. Jason Hickel is an anthropologist who works on political economy and global justice. He teaches at Goldsmiths, University of London. His most recent book, Less is More, just appeared. […]

Juan Laborda – Spain: What Should a Hypothetical, and Failed Coalition Between PSOE and Podemos Have Included? (II)

The failed coalition in Spain of the Social Democrats and Podemos has revealed just how conservative the Spanish Social Democrats are. Juan Laborda teaches Financial Economics at the University of Carlos III and Money and […]