Politicians who are part of the system hide, as far as possible, the complicity of profit-driven capitalism in causing social problems. 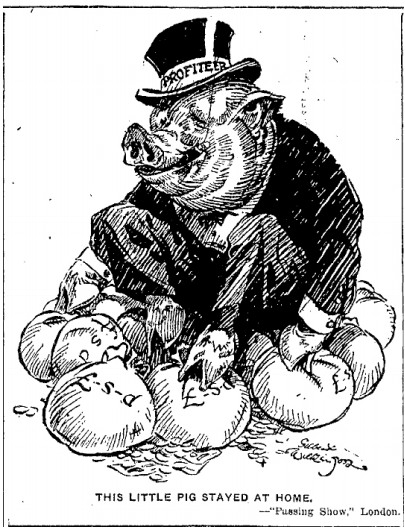 The declines of U.S. capitalism and of its imperial position provoke fear among its mainstream politicians. Their response, in large part, has been to deny that any such decline is happening. These politicians do this partly by acting as though the U.S. remains in the globally dominant position it occupied in the second half of the 20th century. Thus, to maintain this illusion, they start wars in the Middle East, maintain military bases in dozens of countries, intervene in other countries at will and describe the U.S. as the global guarantor of peace, security, and democracy.

Yet these U.S. politicians also sense what the population feels: that decline of capitalism and U.S. hegemony is actually happening. So repeated denials, while comforting the citizens of the country, do not suffice to control popular opinion and thereby common sense. Mainstream politicians in both Republican and Democratic establishments work to anticipate and deflect these popular feelings at any chance that they might evolve into a systemic critique. These politicians, who have seen the critics of U.S. capitalism grow in number and become increasingly vocal over the last decade, are slowly turning popular feelings relating to the decline of capitalism into anti-capitalism. The critics, meanwhile, blame capitalists and their established systems for this decline.

To forestall the success of the critics of capitalism, U.S. mainstream politicians promote popular rages against a series of “causes” relating to the very decline of capitalism they cannot admit or openly acknowledge. Their goal is to displace popular anger and to redirect people’s desire to protest the economic and social decline impinging on them due to this decline of capitalism. This is accomplished by loudly and repeatedly blaming certain scapegoats: immigrants, China, Russia, Black and Brown people, secularists, women, and liberals.

Mainstream politicians have divided their labour in this regard. Some politicians focus on the denial of the decline of capitalism, and others focus on the displacement and deflection of the anger being felt by people over the crumbling system. Some do both. Few recognize and even fewer admit the contradiction involved: what is denied ought then not be displaced, or what gets displaced entails an admission (not a denial) that there is something that needs displacement.

Because the U.S. lost its wars in Vietnam, Afghanistan, and Iraq, these wars must be denied, displaced onto someone else, or perhaps both. The same applies to the shrinking U.S. ability to control the politics of Latin America as evidenced by Cuba, Venezuela, Chile, and many more countries in the region. Similarly, because China’s rapid rise challenges U.S. global hegemony (after being long denied), the country is now treated as a “threat.” Blame for that threat must thus be displaced onto the Chinese, China’s ally Russia, or U.S. politicians who came before and failed to adequately prevent or dispose of the threat. Ironically, the fact that capitalist corporations, the U.S., and others profited greatly by moving production and other related facilities to China is rarely mentioned as causing the threat to U.S. global hegemony.

U.S. politicians’ programme of denying and displacing is borrowed from the corporate sector (as is so much else that the government does). The profit-driven fossil fuel companies long denied that burning these fuels causes climate change or that their monopolistic practices destabilize and often inflate global markets. At other times or places, these corporations have blamed climate catastrophes and fluctuating energy prices on everything they can think of other than themselves and the profit-driven organisations representing the energy industry.

U.S. political leaders in both major parties failed utterly to anticipate, prepare for, and cope successfully with the ongoing COVID-19 pandemic. With the United States accounting for about 4 percent of the world’s population, the country suffered approximately 16 percent of the world’s COVID-19 deaths as of the end of January 2022 (despite its national wealth and developed health care system). Many other countries like Singapore and South Korea performed far more successfully in curbing the spread of the virus. Once again, mainstream politics on this issue is divided between deniers and displacers. Those who chiefly deny the failure relating to the handling of the pandemic by the United States do so by focusing instead on the rising and falling COVID-19 statistics relating to infections and deaths and celebrating whatever little progress is made regarding testing, masking, and vaccinating Americans, while carefully avoiding any comparisons to foreign efforts to combat COVID-19. Various displacers choose to blame the rising number of COVID-19 cases on the nation’s leading infectious disease expert Dr. Anthony Fauci, the Centers for Disease Control and Prevention, former President Donald Trump, President Joe Biden, or the Chinese. One major displacement project stresses opposition to government or private mandates (to mask, vaccinate, or follow other public health guidelines) as a matter of personal freedom. Such displacers irrationally shift blame for the virus onto blame for the mandates and those who issued the mandates. Carefully exempted from blame is the profit motive that drove producers of tests, masks, and ventilators, as well as hospital operators, to invest elsewhere and not in the production and safe storage of tests, masks, and ventilators. U.S. capitalism failed to produce what is needed to manage pandemics known to cause menace to societies from time to time. Likewise, exempted from blame is the private profit motive that delayed investments in vaccine development and still further delays in the global distribution of COVID-19 vaccines. Denial and displacement work well to keep capitalism out of and away from public discussion, and from being targeted as the problem to be solved.

More recently, mainstream U.S. politicians—again, establishment figures from both major parties—applied the denial and displacement mantra to the problem of inflation in the U.S. economy. The denial with which they confronted inflation was oddly focused on the future. Americans were officially assured that the inflation would be limited in extent and would be merely transitory. Its possible depth and duration were denied. Federal Reserve Chair Jerome Powell and others down the bureaucratic ladders confidently predicted inflation’s future decline. When the lack of evidence behind such denials about possible future decline in inflation became clear when the real inflation data were announced, attempts at displacements by politicians and bureaucrats grabbed the limelight. The no longer deniable inflation was dutifully blamed on supply chain disruptions, Federal Reserve monetary policy, the Democrats’ fiscal policies, the Chinese, Trump, or Biden.

Yet again, virtually nowhere did politicians or media commentators refer to capitalism’s role in causing this inflation. As every business school teaches its students and as capitalists have repeatedly admitted, profit is the bottom line, the goal of business decisions. One such decision is setting prices to maximize profits. After nearly two years (2020 and 2021) of a depressed profit situation for most businesses, employers across the U.S. wanted to recoup their lost profits. They hoped to do so by raising their prices as much as the market could bear. In capitalism, employers (a tiny minority of the population) exclude employees (the vast majority) from making price decisions. Especially in the latter half of 2021, many employers raised prices of their goods and services. They thereby caused an inflation to improve their profit situation: what they are in business for. For the employees, who are in the majority and were already hurt badly during the two years of the ongoing pandemic plus the 2008 economic crash, an inflation, especially one outrunning their wage increases, was unspeakably bad news.

Denial and displacement serve mainstream politics in capitalist societies. The politicians who are part of the system hide, as far as possible, the complicity of profit-driven capitalism in causing social problems. They obstruct (or actively undermine) public policies that might solve these problems and ignore the systemic changes that might be needed to resolve these inherent issues that form part of the capitalist system.

Alessandra Mezzadri – UCU Strike: Neoliberal capitalism and the commodification of social reproduction, from our home to our classroom

On 14 February a UK wide strike in Higher Education will commence (at Goldsmiths it already has). Alessandra Mezzadri is Senior Lecturer in Development Studies at SOAS Cross-posted from Developing Economics To donate to he UCU […]

This may not be the simplest of reads, but the analyses is fascinating regarding international trade agreements: “In assessing the impact of the Single Market and NAFTA on the 10 countries looked at, we can […]

Yanis Varoufakis – Why Stop at the Russian Oligarchs?

At a time when Russian bombs are destroying Ukrainian cities, there is good reason to focus on the oligarchs supporting the Kremlin. But do American multi-billionaires and Saudi princes enjoy less political clout, stash less […]