One knows things are getting serious when organisations like the Bank of International Settlements (BIS) start thinking about the effects of the climate crisis. 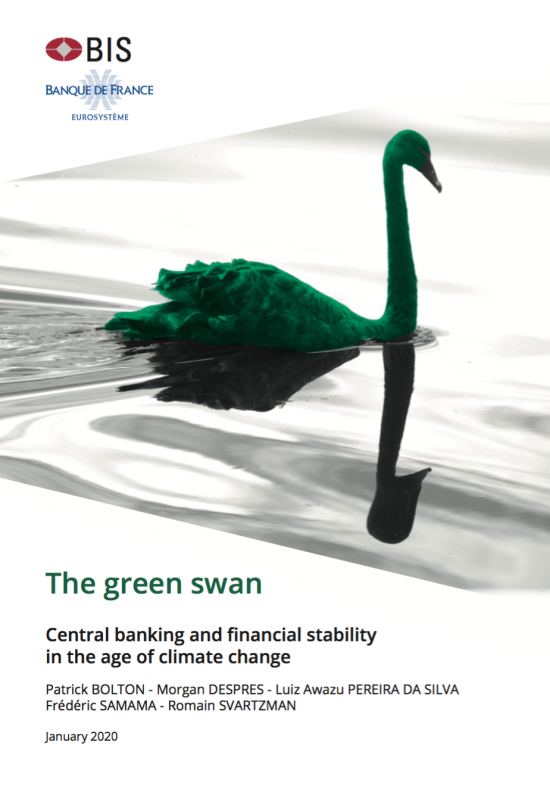 The Bank of International Settlements and Banque de France published an eBook for Davos this week.

The BIS says of the book that:

Traditional backward-looking risk assessments and existing climate-economic models cannot anticipate accurately enough the form that climate-related risks will take. These include what we call “green swan” risks: potentially extremely financially disruptive events that could be behind the next systemic financial crisis. Central banks have a role to play in avoiding such an outcome, including by seeking to improve their understanding of climate-related risks through the development of forward-looking scenario-based analysis.

But central banks alone cannot mitigate climate change. This complex collective action problem requires coordinating actions among many players including governments, the private sector, civil society and the international community. Central banks can therefore have an additional role to play in helping coordinate the measures to fight climate change.

Those include climate mitigation policies such as carbon pricing, the integration of sustainability into financial practices and accounting frameworks, the search for appropriate policy mixes, and the development of new financial mechanisms at the international level. All these actions will be complex to coordinate and could have significant redistributive consequences that should be adequately handled, yet they are essential to preserve long-term financial (and price) stability in the age of climate change.

The obvious question to ask is whether or not central bankers are the right people to undertake these tasks. I have my doubts, but given the reluctance of Treasury ministers to now take action on issues I fear that by default the role will fall to central bankers.

I also think the BIS are themselves avoiding the sheer scale of the issues that the authors raise both in the above quote and in their forward to it. And for that reason I think it worth sharing some parts of the executive summary to give an indication of just what the authors are really saying, which is expressed with greater urgency than the BIS relays:

This book reviews some of the main challenges that climate change poses to central banks, regulators and supervisors, and potential ways of addressing them. It begins with the growing realisation that climate change is a source of financial (and price) instability: it is likely to generate physical risks related to climate damages, and transition risks related to potentially disordered mitigation strategies. Climate change therefore falls under the remit of central banks, regulators and supervisors, who are responsible for monitoring and maintaining financial stability. Their desire to enhance the role of the financial system to manage risks and to mobilise capital for green and low-carbon investments in the broader context of environmentally sustainable development prompted them to create the Central Banks and Supervisors Network for Greening the Financial System (NGFS).

However, integrating climate-related risk analysis into financial stability monitoring and prudential supervision is particularly challenging because of the distinctive features of climate change impacts and mitigation strategies. These comprise physical and transition risks that interact with complex, far-reaching, nonlinear, chain reaction effects. Exceeding climate tipping points could lead to catastrophic and irreversible impacts that would make quantifying financial damages impossible. Avoiding this requires immediate and ambitious action towards a structural transformation of our economies, involving technological innovations that can be scaled but also major changes in regulations and social norms.

Climate change could therefore lead to “green swan” events (see Box A) and be the cause of the next systemic financial crisis. Climate-related physical and transition risks involve interacting, nonlinear and fundamentally unpredictable environmental, social, economic and geopolitical dynamics that are irreversibly transformed by the growing concentration of greenhouse gases in the atmosphere.

In this context of deep uncertainty, traditional backward-looking risk assessment models that merely extrapolate historical trends prevent full appreciation of the future systemic risk posed by climate change. An “epistemological break” (Bachelard (1938)) is beginning to take place in the financial community, with the development of forward-looking approaches grounded in scenario-based analyses. These new approaches have already begun to be included in the financial industry’s risk framework agenda, and reflections on climate-related prudential regulation are also taking place in several jurisdictions.

While these developments are critical and should be pursued, this book presents two additional messages. First, scenario-based analysis is only a partial solution to apprehend the risks posed by climate change for financial stability. The deep uncertainties involved and the necessary structural transformation of our global socioeconomic system are such that no single model or scenario can provide a full picture of the potential macroeconomic, sectoral and firm-level impacts caused by climate change. Even more fundamentally, climate-related risks will remain largely unhedgeable as long as system-wide action is not undertaken.

Second, it follows from these limitations that central banks may inevitably be led into uncharted waters in the age of climate change. On the one hand, if they sit still and wait for other government agencies to jump into action, they could be exposed to the real risk of not being able to deliver on their mandates of financial and price stability. Green swan events may force central banks to intervene as “climate rescuers of last resort” and buy large sets of devalued assets, to save the financial system once more. However, the biophysical foundations of such a crisis and its potentially irreversible impacts would quickly show the limits of this “wait and see” strategy. On the other hand, central banks cannot (and should not) simply replace governments and private actors to make up for their insufficient action, despite growing social pressures to do so. Their goodwill could even create some moral hazard. In short, central banks, regulators and supervisors can only do so much (and many of them are already taking action within their mandates), and their action can only be seen as enhancing other climate change mitigation policies.

To overcome this deadlock, a second epistemological break is needed: central banks must also be more proactive in calling for broader and coordinated change, in order to continue fulfilling their own mandates of financial and price stability over longer time horizons than those traditionally considered. We believe that they can best contribute to this task in a role that we dub the five Cs: contribute to coordination to combat climate change. This coordinating role would require thinking concomitantly within three paradigmatic approaches to climate change and financial stability: the risk, time horizon and system resilience approaches.

Contributing to this coordinating role is not incompatible with central banks, regulators and supervisors doing their own part within their current mandates. They can promote the integration of climate-related risks into prudential regulation and financial stability monitoring, including by relying on new modelling approaches and analytical tools that can better account for the uncertainty and complexity at stake. In addition, central banks can promote a longer-term view to help break the “tragedy of the horizon”, by integrating sustainability criteria into their own portfolios and by exploring their integration in the conduct of financial stability policies, when deemed compatible with existing mandates.

But more importantly, central banks need to coordinate their own actions with a broad set of measures to be implemented by other players (ie governments, the private sector, civil society and the international community). This coordination task is urgent since climate-related risks continue to build up and negative outcomes could become irreversible. There is an array of actions to be consistently implemented. The most obvious ones are the need for carbon pricing and for systematic disclosure of climate-related risks by the private sector.

Taking a transdisciplinary approach, this book calls for additional actions that no doubt will be difficult to take, yet will also be essential to preserve long-term financial (and price) stability in the age of climate change. These include: exploring new policy mixes (fiscal-monetary-prudential) that can better address the climate imperatives ahead and that should ultimately lead to societal debates regarding their desirability; considering climate stability as a global public good to be supported through measures and reforms in the international monetary and financial system; and integrating sustainability into accounting frameworks at the corporate and national level.

Moreover, climate change has important distributional effects both between and within countries. Risks and adaptation costs fall disproportionately on poor countries and low-income households in rich countries. Without a clear indication of how the costs and benefits of climate change mitigation strategies will be distributed fairly and with compensatory transfers, sociopolitical backlashes will increase. Thus, the needed broad social acceptance for combating climate change depends on studying, understanding and addressing its distributional consequences.

Financial and climate stability could be considered as two interconnected public goods, and this consideration can be extend to other human-caused environmental degradation such as the loss of biodiversity. These, in turn, require other deep transformations in the governance of our complex adaptive socioeconomic and financial systems. In the light of these immense challenges, a central contribution of central banks is to adequately frame the debate and thereby help promote the mobilisation of all capabilities to combat climate change.

I happen to agree with that final conclusion, but think the issue is bigger than the BIS is suggesting.

And on the way the authors introduce a term that we will now live with, which is The Green Swan. But they also make some other things clear.

One is that green quantitative easing (which is discussed, without enthusiasm in the book, suggesting one of its major weaknesses) is not a solution to crisis. They are right to note that:

Green swan events may force central banks to intervene as “climate rescuers of last resort” and buy large sets of devalued assets, to save the financial system once more.

They are also right to note that this, cannot help but have massive distributional impact, and undermine the role of central governments.

Second, they are right to note that:

This is the logic that underpins my work on sustainable cost accounting. In it the concepts of deferral and discounting, implicit in almost all current financial modelling, are replaced by current accounting and compounding i.e. the provisions for the cost of climate change are made now, because if they are not they simply increase.

I will be returning to these issues.

Aleks Szczerbiak – What do the Parliamentary Election Results Mean for Polish Politics?

Although the right-wing ruling party won a decisive victory, the overall balance of support for the government and opposition camps remains evenly divided. Next May’s presidential election now assumes critical importance and could be closer […]