An essential element of the neo-liberal discourse is that leftist political parties always increase the national debt; parties on the right do not. They are fiscally responsible. In his article Richard Murphy takes the trouble to compare the records of the Labour and Conservative parties. The result soundly contradicts the neo-liberal claim.

Philip Hammond said that the Conservatives were still clearing the mess that they inherited from Labour during the budget speech last week. That annoyed me. In 2016 I showed that the Tories have been the biggest borrowers since 1946. I thought it worth updating the data: it now covers the years 1946 to 2022. I do as a result include the latest budget borrowing forecasts until 2022, which is the expected time span of the current government. Since I know of no-one who doubts borrowing will continue until then I think this entirely fair. The data does now, therefore, cover 76 years. Labour was in office for 28 of these years and the Conservatives are expected to be for 48.

My first task was very simple: I  calculated the total net actual or expected borrowing in Labour and Conservative years. All figures are stated billions of pounds in all the tables that follow and are in original values i.e. in the prices of the periods when they actually occurred, unless otherwise stated:

The message is very clear: the Conservatives have borrowed much more than Labour. This is clearly shown by looking at the proprtion of the national debt due to each party:

To make sure this impression of Conservative excess is not distorted by the fact that they have been in office for more years I averaged the borrowing data by the number of years in office:

The Conservatives borrowed more, not just absolutely (which is unsurprising as they had more years in office), but on average each year during this period.

This though, is a bit unfair: the value of money changes over time. So I restated all borrowing in 2016 prices to eliminate the bias that inflation might give rise to. This resulted in the following table:

I am though, of course, aware though that the Tories claim that they’ve only had to borrow in recent years because of the mess Labour made in 2008. To address this issue I then re-performed the calculations taking all the years after the Global Financial Crisis out of account, leaving just 62 year of data to consider. First I did this in original prices:

To check that this impression was fair I also restated the data in current prices:

Now the situation has reversed: the Tories were, in fact, the biggest borrowers for each year in office, after all.

Then I speculated that this switching of roles might be because Labour are good Keynesians: maybe they repaid national debt more often than the Conservatives. Or, to put it another way, they actually repaired the roof when the sun was shining as George Osborne would have had it. This is the data in terms of number of years:

Labour do walk the talk: they repay national debt much more often in absolute and percentage terms than the Conservatives do. In fact, one in four Labour years saw debt repaid. That was true in less than one in ten Conservative years. 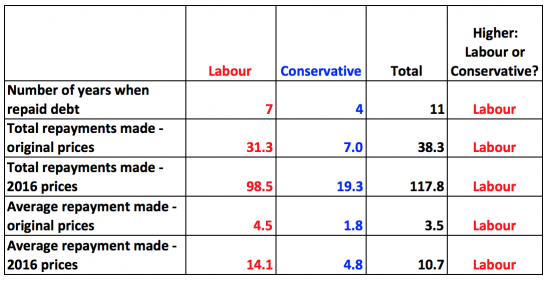 But maybe the Conservatives repaid more. I checked that. This is the data in both original and 2016 prices:

Labour not only repaid more often, it turns out it also repaid much more in total and on average during each year when repayment was made.

So what do we learn? Two essential things, I suggest.

First, Labour invariably, in real terms, borrows less than the Conservatives. The data shows that.

Or, to put it another way, the Conservatives are the party of high UK borrowing and low debt repayment contrary to all popular belief.

For those interested, this is the overall summary table: the pattern in the right hand column is really quite surprising. The evidence that the Tories are the UK’s big borrowers is very strong: 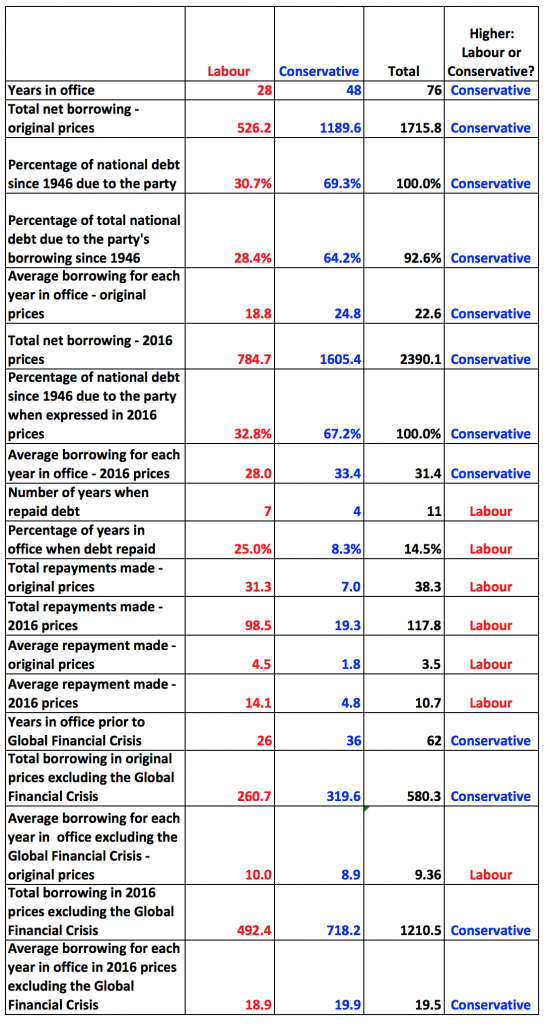 The basic data on borrowing came from the House of Commons Library.

GDP deflator data from 1955 came from the 2017 budget GDP deflators. Estimates post 2016 come from budget data. The data for the period prior to 1955 came from the Bank of England. Data was checked to the Treasury Pocket Data Book: as is usual there are minor differences, but too small to worry about. Budget data is from HM Treasury and the Office for Budget Responsibility.

Governments in office for a year were determined in election years by the number of days each had in office: the party with the greater number being attributed the whole year.

I have previously checked that lagging data by two years to allow for the influence of previous incumbents during the first two years in office does not alter the view given: it does not.

The results here are slightly different to that reported two years ago in respect of earlier years. That is not because I got the data wrong then: the source data is subject to periodic checking and recalculation and this has happened in the last two years.

The Gig Economy is the exploitation system of the future. That is why corporations are fighting unionisation so vehemently, so that they do not ruin the business model. Ben Wray is a freelance journalist leading […]

The changing face of the gig economy Ben Wray is a freelance journalist leading BRAVE NEW EUROPE’S Gig Economy Project. He also produces a morning newsletter called Source Direct on Scottish politics, which you can […]