How politicians blatantly manipulate data to carry through reactionary fiscal policy. Germany is seeing the same thing with the so-called “Bürgergeld”, a social welfare programmme for unemployment benefits.

The UK’s national debt is a strange figure. For example, to most people’s surprise it includes all our notes and coins, as well as premium bonds. But much more worrying is the fact that a significant part of it is created by what I think to be dubious accounting. A thread…

The way the national debt is calculated makes a massive difference when it comes to calculating so-called ‘fiscal black holes’, which are the supposed reason why we need to have austerity and tax rises now. But some of the accounting for this debt is dubious, to say the least.

In particular, let’s look at something called index-linked government bonds. There were, apparently £540 billion of these in issue by the government at the end of June 2022. On average they are repayable in 2040, which is eighteen years time. See https://www.dmo.gov.uk/media/e1ekgoew/apr-jun-2022.pdf

This is not the moment to explain all the mechanics of index-linked bonds, but the essence is quite simple. The bonds are issued by the UK government. Like all bonds, they are just a type of savings account. There is literally nothing more fancy than that about government bonds.

What is distinctive about index-linked bonds are two things. One is the way the interest paid on them is calculated. The other is the way that the amount of repayment due to the account holder at the end of the bond’s life is worked out.

That’s a fact. I do not argue with that. But the amounts involved are not that big, overall. There is a cost, but not enough to change government economic policy.

The problem is instead with the way the government accounts for the repayment due on redemption of these bonds. To explain, let me offer a simplified example based on the real data I have already noted. Also assume inflation this year is 10%.

The 10% inflation rate effectively increases the amount due on repayment of these bonds by 10% or (near enough) £54bn. The question is, how to account for this?

Right now the government charges the whole of this £54bn as an expense in the current year. It just increases the deficit and debt by this amount at this moment. This makes no sense at all.

In that case, it is absurd, and just bad accounting, for the government to put the full £54bn in its accounts now. At the very least it should put in a discounted sum and build it up to £54bn by recognising effective interest payments between now and 2040.

But I would actually argue the accounting is worse than that. The reality is the £54bn is not a capital payment. Due to the way the bond is designed it is all interest due as a result of inflation, in effect.

In that case, the £54 billion cost that will only be paid in 2040 should be spread over the 18 years between now and 2040. £54bn over 18 years happens to be £3bn a year. And that is precisely the amount by which the national debt should rise this year as a result of this cost.

The bond will never be repaid early by the government. There is, therefore, no reason to provide for the full cost of inflation now. And the bond was designed to reflect inflation over its whole life, not in any one year.

In that case, providing for any change in inflation over the whole life is the correct accounting for this. But if that is the case the cost of interest would, in this example, be overstated by £51 billion. And that is the supposed black hole in the government’s finances right now.

What is more, the government knows this. The forecast of interest costs issued by the Office for Budget Responsibility issued in March this year, by when inflation was expected to rise to 9%, looked like this: 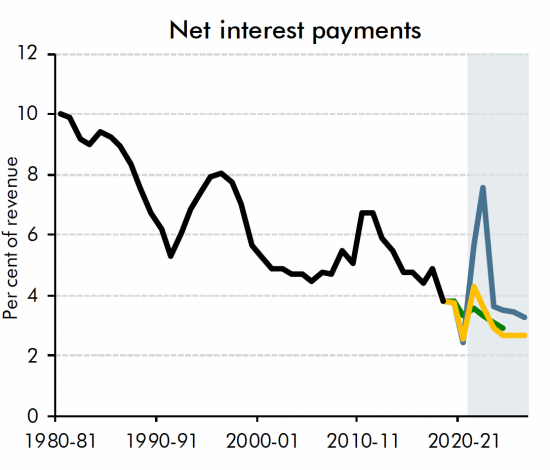 Inflation at the time was forecast to look like this: 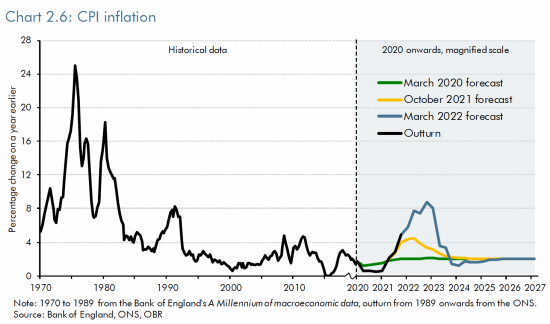 Inflation was forecast to peak at 9% in March. The forecast will only be a little higher when reissued this week.

The massive hike in interest costs in the forecast cost of interest in 2022 represents the expected impact of inflation on index-linked bonds, all of which, as I have noted, has been taken as a cost at the moment that inflation happened.

It is also important to note what was forecast with regard to that interest cost after 2022. Within a year or so after 2022 it was forecast to tumble because it was expected that inflation would go away. This forecast will be reissued this week but will look very similar.

This chart explains why today there are news reports that most of the supposed £50bn ‘black hole’ the Chancellor faces is down to increased interest costs. Not all, admittedly, but most. And now you know why: it is entirely because of this false accounting.

What we are going to have is austerity now because the government will, in eighteen years’ time, have a bill of about £50 billion or so more than expected. Spread over the intervening years the cost is £3 billion a year, which in government accounting terms is neither here or there.

Most importantly, there is no money due out now with regard to this cost. The payments are not going to happen for many years to come. But despite that, the government is insisting that we must have savings (or austerity) now to cover that bill.

That’s like saying someone must put aside all the money to pay their interest-only mortgage now when the final settlement on it is not due for another 18 years. Of course, no one does that. They save the money, quite logically, over the 18 years so that they have it when needed.

But the government is not doing that. Instead it is insisting on austerity at this moment to pay a bill due in 18 years. We must suffer today as if we were going to pay this cost in full today when we aren’t, and when putting aside £3 billion a year for 18 years will cover it very nicely.

In other words, we are paying an enormous price for this dubious accounting. We do not need austerity. Nor do we need tax increases (except on the wealthy). We could, in fact, spend more, because the government has almost no extra costs for this reason right now.

Instead, households are going to be crushed with bigger tax bills. The public services will be punished. People will not get the pay rises they deserve. The NHS will be pushed over the edge. And all because the government is insisting it must have the cash now to pay a bill due in 18 years’ time.

I have been corresponding with the Office for National Statistics on this issue for some time now. I have been trying to get this accounting changed. I am not succeeding, so far. So it’s time to go public on this, because it really matters.

My hope is that Labour also realises this.

So why is it agreed that we must live within ‘constraints’ (the jargon word, heard a lot from all commentators yesterday) that simply do not exist? What is the reason for this false debt narrative that is based on dubious accounting for a bill not yet payable? I wish I knew.

What I do know is that good accounting matters, but we are not getting it here. The cost will be misery, lives lost and untold harm to the life chances of many more – including all the young people who have already endured Covid.

Accounting can be a force for good. On this occasion it is being used to impose harm. And in my opinion that is unforgivable.

rawpixel.com / shutterstock Michael Grubb, UCL Science is slow. It rests on painstaking research with accumulating evidence. This makes for an inherently uneasy relationship with the modern media age, especially once issues are politicised. The […]

Richard Murphy – Money in pursuit of Hopelessness: the Gold Price has hit an all time High

A snapshot of the world economy. Richard Murphy is Professor of Practice in International Political Economy, City University of London. He campaigns on issues of tax avoidance and tax evasion, as well as blogging at Tax […]

The problem with the EU and Euro is that they are based on lies under the presumption that if repeated often enough, they will become reality. This worked well for a while, but as Abraham […]