One of the apparent oddities of the current crisis is the fact that stock exchanges have not fallen as far as might be expected. 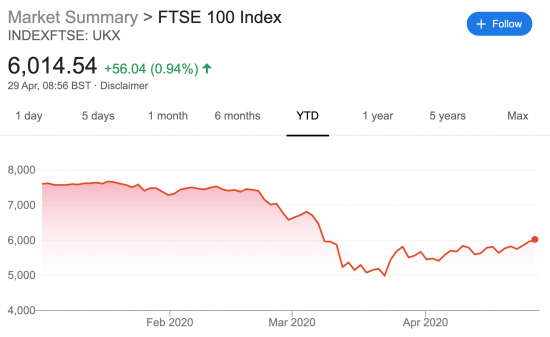 The UK is not alone in facing unemployment rates of up to 30%, which are disguised by furlough arrangements at present. Although so far no major company has gone bust some, especially the travel and tourism sectors, look to be very vulnerable. There is a very real prospect of recession. The likelihood of deglobalisation is real. Oil prices hardly exist any more. Banks face massive loan risks. Future profit expectations have to be reduced. And yet stock markets are only down about 20% or so from their peak now, and look to be slowly covering.

Why is this? I offer three explanations. None is an absolute answer. I should make clear other interpretations are possible.

First, markets are absolutely confident that governments will not let major companies go bust. In 2008 we discovered the concept of ‘too big to fail’ when it came to banks. Now we have gone a stage further. This concept is now the norm, and most certainly when the chips are down for the economy as whole.

Governments know that economic chaos is costly for them. I do not just mean in cash terms, although that is obviously true. Instead, it means that those elected politicians who make up governments known that the incumbents in a crisis usually pick up the blame for it, whether that is fair or not. The consequence is that those politicians have every incentive to minimise the risk of the largest employers in an economy failing, even if the minnows can, they think, be lost. It is not by chance that government bailouts have concentrated on the banking, finance and large business sectors in that case. This is not largesse. Nor is it real concern, or even economic rationality, that necessarily drives this. It is just ministers desire for their own survival. Too big to fail means it is just too uncomfortable for some minister, somewhere, to pick up the consequential risk of this in their own constituency.

The result is obvious. What the City realises is that the risk of corporate failure in large businesses no longer lies with the shareholders of a company. It does instead rest with the government. The reality is that, in effect, shareholders are not the providers of capital of last resort to a company now, as economic theory suggests. Instead the government now is. By providing loans, furloughing staff and making it clear that though QE and other programmes (where corporate debt buying is now on the agenda) whatever funding is required by larger companies to stay afloat will be provided. The burden of risk has been removed from most shares. No wonder the market is rising again. The rates of return it might expect might have gone down, but what there is now appears to be largely risk-free. That’s ample reason for the markets to celebrate.

Second, stock markets do not, in any event, price market risk because most of the companies operating in them are not market players. They are, instead, monopolists, or at the very least, oligopolists. And monopolists do not work in markets. They do instead exploit them for their own ends. This needs some explanation.

My claim is based on a number of facts. The first is that some major market sectors are massively supported by state licences which create monopolies. Banking and the extractive industries are two of them.

Then there are more sectors that heavily on copyright and patents to generate massive monopoly profits by letting the heavily overcharging for what they do. Tech, pharma and car companies are obvious examples. These monopolies are also state granted.

There are also natural monopolies. Water, and to a large degree other ex-privatised industries fall into this category. They were, after all, nationalised for this reason.

All three of these categories extract rents – which are unearned supernormal profits attributable to their state-granted monopolies – to make their exceptional profits. These monopolies are not threatened right now. As a result, nor, in most cases, are the profit streams coming from them.

And thereafter there are the rentiers: those who simply extract more traditional rents. They may be hit right now, but they will be back. That’s because impoverished thinking in the savings market, added to the fact that all UK bankers really want to lend for is land acquisition, means that is inevitable without reforms.

Which brings me to the third reason for this survival of stock market values and that is that same impoverished thinking of the savings market. Whilst UK pension and life assurance funds, who manage much of the savings market, think the only things they can save in for those they supposedly represent are shares, corporate bonds, government bonds and property, then money will keep flowing into these sectors and keep the prices up. This does not mean there is any value in them. It just means the Ponzi scheme has not been broken as yet.

So markets are rising, however illogical that seems.

What to do about it? Several things, where ‘several’ means this is an open-ended and developing list.

First, end the monopolies. The state has to reconsider all the licences it grants and what it gets back from them.

Second, reform patent and copyright law. Anything much beyond ten years is unnecessary, I think: ideas cannot be owned in perpetuity. And yes, some rock stars will protest. Tough luck: just keep touring.

Third, the future private ownership of natural monopolies has to be in doubt, starting with rail and moving on from there.

Fourth, rent controls have to be considered when it is rent that has, for example, hollowed out our High Streets. This sector enjoys far too many rights, many of which need to be challenged.

Fifth, require that pension funds, ISA funds and other invest the savings they manage, I suggest how, via the Green New Deal, here. Right now almost all savings are dead money that does nothing for anyone but fund managers. That has to be changed, and regulation must do it.

And last? Recognise that we have better options for a post coronavirus economy. We need to take them.

Jason Hickel – Apartheid in the World Bank and the IMF

These institutions were designed with colonial principles in mind, and they remain largely colonial in character to this day. Jason Hickel is an academic at the University of London and a Fellow of the Royal […]