In this age of Teslas and hydrogen, surely taking the carbon out of transport is fairly easy? Well, yes and no… 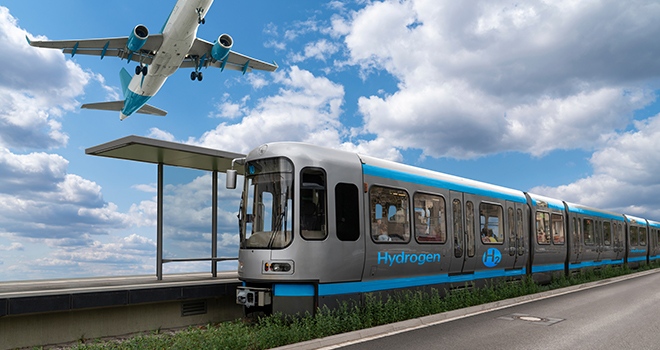 To explain why this is a little complicated it is worth starting with the question of what will make our vehicles move in the future. And, as with heating, each option brings its own benefits and problems.

Once we stop burning petrol to move around we end up with two basic options. The first is battery electricity. The advantage to battery technology is that it is fairly quick and easy to charge them up. Not as fast as filling your car with petrol but at least in the same ballpark (i.e. minutes, not hours). Batteries are also very efficient at running electric motors so they make for efficient vehicles.

But batteries are heavy and take a fair amount of lugging around. They use a lot of valuable rare-earth minerals. And they degrade, losing their capacity over many cycles of recharging. Plus while charging a batter might be in the same ballpark time-wise as filling your car with petrol, you really will notice the difference between ‘under three minutes, filled, paid and away’ and ‘plugged in for 15 minutes’.

The other main option is hydrogen, which in turn offers two options for moving vehicles around. You can treat it like natural gas and burn it, creating thrust like in an airplane or a ship’s turbine. Or you can run it through fuel cells which use a chemical reaction to convert the hydrogen into electricity and then run electric motors with that.

So what are the downsides? There are quite a few with hydrogen. Perhaps the most pressing is that it is a highly-explosive gas that can be easily ignited. You do not really want to be refilling hydrogen fuel in anything other than a carefully controlled environment. You can swap out fuel cells rather than refill them but hydrogen is about three or four times as explosive as petrol.

Others are a bit more routine – there isn’t a reliable supply of green hydrogen yet, there is nothing like enough hydrogen refuelling infrastructure and it isn’t cost-competitive with other fuels at the moment.

But all of the technological limitations of hydrogen and batteries do help us in one way – it greatly clarifies our fuel strategy. You can easily find graphics online which set out various ‘priorities for green hydrogen use in the economy’ and, other than a few specialist industrial applications, at the top currently comes ‘decarbonising sea freight’.

Because where hydrogen comes into its own is when it is moving big vehicles long distances, particularly where refuelling or recharging isn’t possible like on long sea journeys. Hydrogen is very light in comparison to the energy it contains and it is very compact when liquified. That makes it perfect for large-scale, long-distance sea and air travel.

But it really doesn’t make much sense at the family car scale. Here everything from the ease of creating charging infrastructure to the kinds of distances domestic vehicles drive scream out ‘battery electric’. This is also true of small vans. In fact the ‘crossover point’ is when you come to large lorries and trucks. They can be either battery or hydrogen and a consensus on which hasn’t really developed yet. Both will probably be used.

So that’s that then, right? Get the charging infrastructure in place and get everyone to replace their cars and get more people using public transport. That’s a pretty clear picture is it not?

Well, not quite. There are some major questions around what any of these things mean in practice. That is a result of technology changing quickly in this field.

Let’s take charging infrastructure. This is pretty straightforward if you have off-street parking but it is a nightmare if you don’t. Charging cars fairly slowly overnight when demand is otherwise low is ideal, but you can’t do that parked on a street (you can’t have big charging cables lying across all of our pavements). Putting in safe roadside charging would be a massive engineering job and very expensive.

But what about developments in driverless cars? Like it or not, the massive scale of investment in this technology is going to pay off sooner or later – there may be dispute about when this technology will become viable but it will become a major part of transport planning.. When it does the attractiveness of owning a car will change dramatically – for many people fast, inexpensive and reliable driverless taxies will become a very attractive option.

And driverless cars will go their own way with charging – they will drive themselves to the charger. That’s the complication – there are three models for car ownership in the electric era and each has entirely different charging infrastructure requirements. A wasteful, hodge-podge mess would be easy to drift into.

And the question of what public transport means in this context will be an open question. Supporters of buses and trains highlight their efficiency – but that is only really true when they are running near capacity. A three-quarters empty bus is distinctly inefficient. Who will pick that mode of travel when they have easy access to driverless taxis?

Will people still own vehicles? Think of the way that an entire generation have given up on owning music in favour of a subscription model. Will we move in bulk as we currently do on public transport? And how do we get infrastructure right to meet any of these needs?

That is the fundamental problem with transport. In most other areas of decarbonisation the technology is mature and well-tested. This is not really the case in transport so we don’t know where we’ll end up. The timescales on achieving zero-carbon transport is currently in the order of two or three decades and other technologies like driverless are moving at a similar pace.

That is why the Common Home Plan was quite cautious on transport. It proposes that we dedicate something like £10 billion to the core infrastructure we will definitely need – fast chargers, hydrogen refuelling networks and so on. But where that infrastructure will be and its nature is still up for discussion.

But be absolutely clear – that is only a small fraction of what will need to be invested from somewhere. Simply shifting our entire car fleet from petrol to electric will cost well over £50 billion all told. What we really need is a national commission to discuss and debate all these issues and help us come to some kind of conclusion.

Some final words on transport are really important though; we should stop imagining that the future will just be like the present. We need to change how we move, but we also need to change why we move. We have built our society around private cars and our society reflects an assumption of long-distance travel for much of our lives now.

We commute long distances, we shop in out-of-town shopping estates, cinemas are often in big retail or leisure parks, we drive to the gym and do on. We need to change our assumptions about this. That is why so many people talk about ten-minute neighbourhoods or about ‘liveable cities’ with much more scope for walking and cycling. That is our future – efficient transport when we really need it, human-scale urban design so we need it much less.

The same goes for our relationship with time. We orientate our lives around the time taken to travel with the assumption that the travel is the non-negotiable part of that equation. To give you an idea of why that isn’t the way to look at things we finish here with air travel.

Because while the core technologies (hydrogen and battery-electric) are well tested for much of our transport needs, the steps needed to decarbonise flight (and particularly long-haul flights) is a long way away, at least on a cost-effective basis. Hydrogen can replace aviation fuel in a number of ways but it is currently miles more expensive.

So we need to stop and think again about the relationship between time and transport for long haul travel. Sometimes we just need to rethink what a successful journey is. Is it always faster? Rather than two or three hours in a plane to the Mediterranean, what about a two-day cruise on a hydrogen ship or an overnight on a modern airship?

There are debates and disagreements on all of the above – some people are driverless-sceptic, some think batteries do more environmental damage than efficient use of hydrocarbons, some people are deeply committed to the merits of bulk public transport.

And all those debates are precisely why sorting transport out is a little trickier than it might first appear.

Workers have not caused this price inflation Michael Roberts is an Economist in the City of London and a prolific blogger Cross-posted from Michael’s Blog CC BY-SA 4.0 The UK prime minister Boris Johnson is […]