Today, 2 March, we enter the third week of the UK University Strike. Staff are not standing alone, but have been joined by many students (who the university expected, due to the high fees they have to pay, to turn on their striking staff). Far from it. 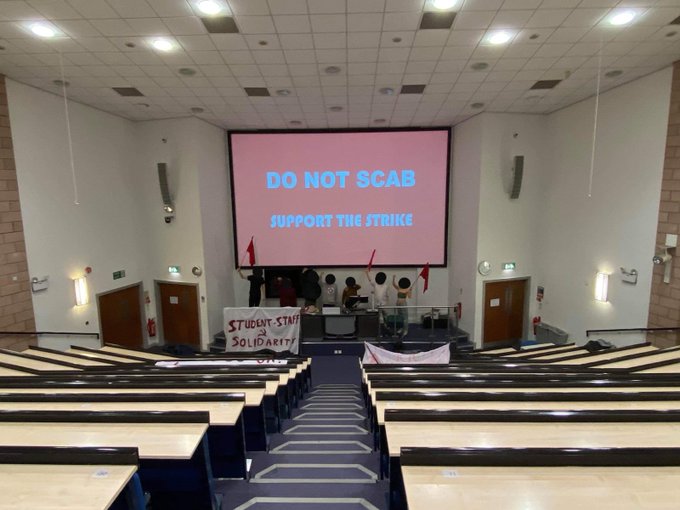 ‘We will listen to students.’ This was the declaration of Janet Beer, the then-new Vice Chancellor of Oxford Brookes University in October 2006. Though this quote, will soon reach its fifteenth anniversary, Beer has been saying similar things for several years to the students attending the University of Liverpool, where she is the current Vice Chancellor, raking in an eye-watering £410,000 salary.

This said, students at the University of Liverpool have heeded Dame Janet Beer’s invitations for communication and dialogue. They have done so with the vociferous and vehement disdain that comes with the crippling nature of student debt, the witnessing of the deterioration of lecturers’ working conditions, casualisation of the university staff’s contacts, and decline in real terms of staff’s salaries. The consequence is that some of the people emboldening the next generation’s knowledge have to rely on foodbanks to get through the week. We are clear in our responses: enough is enough.

We students have had enough, staff have had enough. And we proudly stand in solidarity with UCU members across all seventy-four UK universities that are sacrificing fourteen days of pay to stand up to this toxic teaching and learning environment that the increasing marketisation of education results in.

We have stood on picket lines every day during this dispute, just as we did in 2018, 2019, and will continue to do until real, palpable progress is achieved. We will continue to support the UCU staff by any means necessary, from encouraging students not to cross the picket lines, to occupation of lecture theatres and teaching rooms of picketed university buildings.

With regard to the latter, several students occupied the University’s five-hundred capacity Sherrington Lecture Theatre on Wednesday 26th February from 8am, preventing three hours of highly-attended lectures from going ahead, before joining UCU members on a march and rally that took place in Liverpool city centre. This type of action is relatively easy to pull off, but is hugely effective, and we would all encourage like-minded students across the country to do the same. I’m sure many already have and will continue to do so: keep it up, comrades. I’d like to note here that demonstrations such as these are not designed to harm the learning of students. We all want to be in lectures and to use every day to enhance our education. What we and the UCU are trying to achieve here is to fight back against the profit-driven, soulless and commodified state of our education system. If we can fight back now, future students may not have to. UCU members are absolutely on our side, and we thank them for everything they do for students all of the time. Thus, the more we as students push back, the more powerful the UCU’s position becomes, and this is vital as we enter the third week of industrial action.

The first five days of action have been encouraging, from both the student and union perspective. It is warming to see fewer students on campus now when compared with the previous eight-day dispute in December 2019, and genuinely brilliant to know that friends in the Communication Workers’ Union won’t even bother to try and deliver mail to the university on any of the days of action. There is room for optimism, but this can only be the start. Maintaining this level of energy, strength and solidarity across the next two weeks is paramount. At the minimum let’s keep up the high numbers of staff and students on picket lines. Let’s even strive to get more of us out. Battle-hardened by wind, rain, sleet, and everything Storm Dennis has thrown at us, there is no reason to relinquish even an inch in the coming days. It is now or never for the sector and the future of Higher Education. Keep going.

So, to all Vice-Chancellors like Dame Beer who profit exponentially while students and staff suffer, I really hope you are listening. We’re not giving in without a fight. Victory to the workers.

The EU has shown complete ineptitude running up to and during the Russian-Ukraine war and will be one of the major losers Boaventura de Sousa Santos is the Emeritus Professor of Sociology, University of Coimbra […]

The hypocrisy of neo-liberalism, as so often with modern philanthropy, became very obvious after the fire at Notre Dame. Heiner Flassbeck explains why Emmanuel Macron give the super-rich their money back and instead tax them […]