The Germans are not going to give up their EU hegemony. With weaponised finance they can maintain their predominance. Remember what happened to Greece as it rebelled against this.

Albert Medina is a Catalan economist specialized in European Integration. He works as an Economic Analyst for Ekona-Economic Innovation Center. He is member of the EReNSEP

Pablo Cotarelo is a Spanish engineer. He works in the development of energy and industrial policies at different levels, including remunicipalisation and nationalisation. He is member of the EReNSEP

Marc Lascorz is a Spanish engineer and businessman, with strong interest in macroeconomics and international affairs 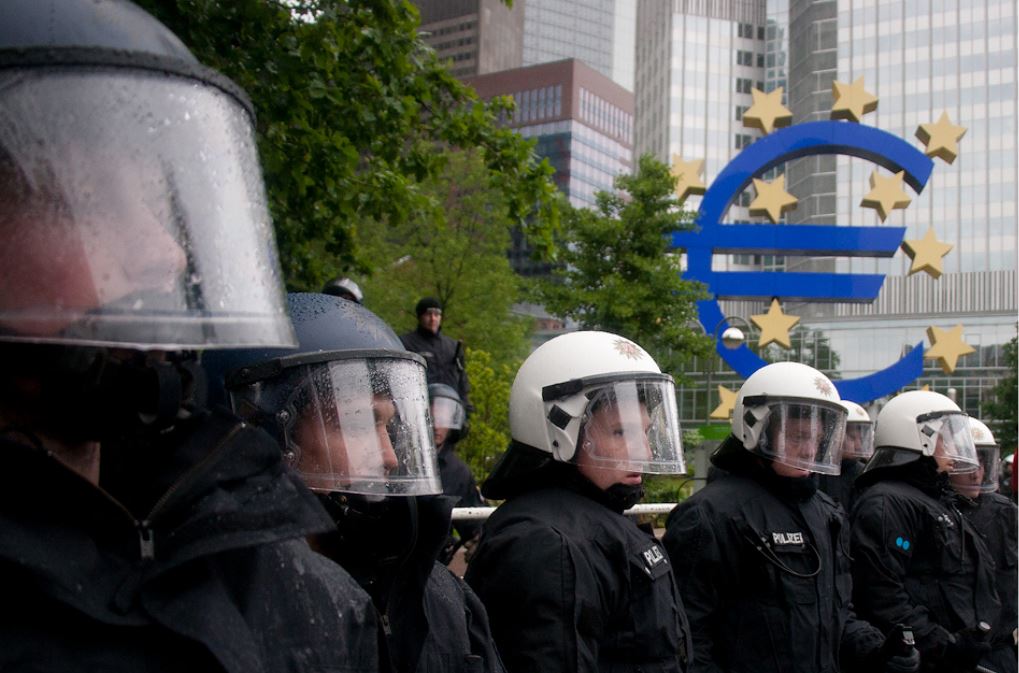 Once again, the Covid-19 crisis has exposed the Eurozone’s weaknesses. Faced with the extraordinary expenditure that the different countries will have to make to counter this crisis, the question once again, as in 2010, is: how will this be paid for? Or more specifically, who is paying for it?

Faced with this question, different proposals are already emerging with various mechanisms for sharing costs to a greater or lesser extent. Despite the fact that Peter Altmaier (German Minister of Economy) has already ruled them out, around these proposals the concept of Euro bonds is once again emerging. There is a very broad spectrum of what this policy should look like, for some it means one thing and for others something completely different.

Traditionally, from the European Left, the concept is considered progressive and there has already been a collection of signatories (here) to demand them, with a text so unspecific that it is impossible to know the implications of what was actually signed, opening the door to proposals that would only deepen the crisis. To date, three proposals seem to have prevailed in the debate, the result of which will mark the future of the lives of tens of millions of people in Europe.

The first proposal is that the European Stability Mechanism (ESM, informally, the “European rescue fund”) should finance the crisis effort with the money it has available (410 billion euros) through a credit line for those nations that request it (see proposal here) and issue new bonds in case more resources are needed, which is likely. This would mean that countries that need it would have to apply for a loan from the ESM, associated with a Memorandum of Understanding (MoU), a document of macroeconomic commitments, such as those that have served to impose austerity until now. The Eurogroup meeting on 24 March agreed that this would be the way to finance countries in need and Italy and Spain are already preparing to apply for loans.

Despite the fact that, due to the current spirit of solidarity, it is claimed that these loans would be offered without conditions, Article 7 of Regulation 472/2013, which regulates the economic supervision of the Member States, allows the European Council to change the conditions of the loan merely with a qualified majority (55% of the countries or countries with 65% of the Eurogroup population) if it considers that the state that has requested the loan is deviating from the macroeconomic objectives of debt reduction. It is not difficult to think that this would happen when things return to relative normality, given that the debt levels of Italy, Spain, Portugal or Greece are very high and any small deviation could serve as an excuse for the more orthodox countries of the Eurozone to impose drastic debt reduction prescriptions. It should be remembered that these states enjoy a majority and the decision to intervene could be taken by the countries that have signed these MoUs.

In short, this proposal is tantamount to a rescue like those practised during the financial crisis from which Spain is still recovering, with the only difference being the initial goodwill to offer favourable conditions. This is why this proposal is a huge danger for nations like Spain and absolutely unacceptable.

The second proposal would be for Member States to issue sovereign bonds with maturities of 50 or 100 years, or even perpetual (non-maturity) bonds at interest rates close to 0%, for example 0.5%. These bonds, despite being issued by the states, would be guaranteed by the European fiscal authority, that is, by the Eurozone budget, which would have to be expanded in the near future to give these bonds credibility.

Nine Eurozone Member States have just called for such an initiative. Such a proposal is more interesting than the previous one, but nevertheless keeps us within the neo-liberal monetarist framework. The monetarist theory, already proven to be false, is the theory behind the idea that states should not spend too much, nor intervene in the economy, and even less if they do so with their own currencies and their own central banks, because this causes inflation to rise. It is this theory that prompted the treaties that have imposed austerity on Europe, such as the Stability and Growth Pact, which have justified the tight control of deficits and forced a retreat from the welfare state in recent decades.

It is also this theory that has underpinned the anti-inflation doctrine of central banks such as the Bundesbank or the European Central Bank (ECB) that are prohibited from financing public deficits and has served to impose the independence of most Western central banks that have been expropriated from the ministries of finance and economy, putting them at the service of the private banking sector.

Thus, this proposal, despite being associated with fewer austerity constraints, admits that it is the markets that must give the states permission to finance their effort to exit the crisis, since it would be these markets that would buy the issued debt and allow the ECB not to organise the crisis effort at its discretion and indefinitely. In short, it would be tantamount to increasing debt through market mechanisms.

It is true that these “safe assets” that would be the Eurobonds could serve to break the dependence between the banks and the public sector of the same state, allowing a greater banking internationalisation and thus a greater integration of the European markets. However, it is highly debatable whether we need more financial globalisation and more market mechanisms to be able to finance this crisis effort. And it is also very dangerous to use the pressures of the crisis to associate the fate of the EU integration project with the successful resolution of the crisis.

In short, in our opinion, the issue of Eurobonds in the market would legitimise this theoretical neo-liberal framework that we should bury forever. This proposal, moreover, continues to distance the economic tools available to states from their citizens, which would deepen the democratic deficit that we already suffer in Europe.

Finally, the third and last proposal would be that states issue bonds to combat the crisis, as far as necessary and focusing on “human necessity” and that central banks buy them in perpetuity and at 0% interest. As former World Bank research director Branko Milanović states (link), in a war situation (comparable to the current one) it is not the financial parameters that should count, but the number of sick lives saved and the number of workers in the different occupations that will allow us to save these lives and maintain the economy’s supply while it does not return to normal. This means not saving to keep society on its feet for fear that the bill will have to be paid later. This is why the conceptual framework we need is that of a “modern jubilee”, a rescue for the majority.

This type of proposal has been supported these days with different nuances of very diverse voices around the world, from former Spanish president José Zapatero, who is asking for debt cancellation for Latin American countries to renowned economist Jordi Galí, who, similarly to us, is asking for direct financing of the deficits of the covid-19 crisis, without these being counted as debt.

This expenditure that all states must make to face the same threat must be annulled or, if preferred, not counted as debt. This is very easy to do. Currently, the ECB has already launched an extraordinary bond purchase programme, called the Pandemic Emergency Purchase Program (PEPP). This programme will buy Member States’ debt on the secondary market (i.e. from banks) and will be flexible with regard to the proportions that can be bought from each state, temporarily bypassing the mandate to buy only in the same proportion as the states are partners of the ECB. This will be accompanied by the lifting of the deficit restrictions laid down in the Stability and Growth Pact. In our opinion, these are already adequate European solidarity measures and we must fight to ensure that the ECB maintains them in perpetuity for the debt issued during the crisis period, not allowing responsibility to be offloaded onto market mechanisms when the crisis passes, which could lead to new pressures in our countries with high levels of debt that could lead to new adjustment programmes or state bankruptcies.

In conclusion, we consider that this latest version of Eurobonds or Corona Bonds, which should be bought directly by the ECB in perpetuity at 0% interest and limited to this period of the efforts against the crisis of covid-19, are the only Eurobonds that go beyond the neo-liberal conceptual framework and therefore beyond the logics of neoliberal power and negotiation that have mortgaged the lives of many people, mainly in southern Europe.

After years of institutional tensions within the EU, one EU institution, the ECB, has transcended the neo-liberal framework and depoliticised public deficits at the European level. The efforts of the European movements should not be directed at taking responsibility from the ECB to then put it in the intergovernmental institutions, where ideological differences in economic policy are evident and the European re-politicisation of public spending would be a matter of time. We warn that this has been an unwise move to preserve the ground gained beyond the Stability and Growth Pact. Let us hope that we are up to the task in this complex and subtle debate.

Mathew Lawrence and Andrew Pendleton – Owning the future: strategies for a democratic economy

Cooperatives, especially workers´ owned cooperatives, are the antidote to capitalism. But being a capitalist society, cooperatives have always been disadvantaged. This has to change. Mathew Lawrence is a senior research fellow at IPPR and co-author […]

Most developed nations are capable of using their own currency to pay for exports, thus having a better chance of managing its debt in foreign currencies. This is not true of developing nations according to […]