On November 14th, Greece`s largest union, ADEDY, which represents about half a million public sector workers, carried out a one day strike. The union is demanding that the SYRIZA government retracts pay and pension cuts and tax increases which were part of three bailout programmes since 2010. We asked Stavros Mavroudeas to give us a brief evaluation of the strike.

Stavros Mavroudeas is Professor of Political Economy at the Department of Economics at the University of Macedonia, Thessaloniki 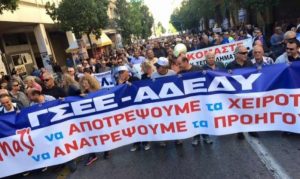 These days some glimmers of hope seem to be appearing in a Greek society devastated by the EU. This is not the result of the false claims that the Greek crisis is over, being vaunted by the EU, the SYRIZA government, and the champions of Greek capitalism. Instead, it comes from a resurgence of popular protest in Greece after a considerable period of calm. Several strikes have already taken place and participation, although not spectacular, is increasing.

The Greek people have been suffering from a capitalist crisis and a barbaric EU-IMF austerity programme for almost ten years. Following the eruption of the 2008 crisis and the subsequent euro-zone crisis, Greek capital and its foreign patrons (EU and the US) imposed a vicious programme of austerity upon the country (adjustment programmes overseen by the troika –the European Commission, IMF and European Central Bank).

Initially there were strident popular reactions to these austerity programmes that discredited the establishment parties and led to frequent changes of government. However, this popular activity and energetic intervention by the people was defused when SYRIZA was elected to government, since the party had promised to ameliorate the population’s devastated living standards. But SYRIZA betrayed the people’s trust by continuing the same austerity policies as its predecessors. Instead of shelving the troika programme, it agreed to a new third one. However, popular mobilisations remained subdued as SYRIZA discredited the Left and the people were at a loss to know how to respond to SYRIZA’s betrayal. The recent resurgence of popular protest breaks this pattern and possibly signifies a return of the masses to the political foreground.

There are several reasons for this resurgence:

First, SYRIZA and the EU, by declaring that the Greek crisis has ended, are proving to be victims of their own deception. The Greek crisis is still simmering and is far from over. Its structural causes (the low rate of profit of capitalists and imperialist exploitation by the core euro-zone economies) are still present. Furthermore, Greece´s immediate problems (such as the debt burden on the economy) have not been solved but only swept under the carpet. The EU propagates the myth that the Greek crisis has ended because it wants to avoid pressure from the US and is under increasing strain as new serious conflicts arise within the EU (Brexit, the budget dispute with Italy etc.). SYRIZA is following suit hoping that by selling a false ‘success story’ it might win the next Greek election. However, behind this façade, the Greek people sense that if the crisis has at least stabilised, then there must be space for recuperating at least some of the huge losses they have suffered. It should be noted that the Greek workers and middle classes have borne the burden of austerity, whereas Greek capitalists and oligarchs have remained largely unscathed.

Second, 2019 is a multi-election year. Greece will be holding EU elections, local elections, and ultimately general elections. So, the people sense that establishment parties are in a vulnerable position and if they don’t want to suffer huge electoral losses then they have to make concessions. The Greek and EU establishment on the other hand want to make as few concessions as possible, get past the elections, and then renew their austerity drive.

However, history has taught us that once the genie of popular action is out of the bottle, the corrupt Greek and EU establishments may not be able to contain it. The return of popular protest is a glimmer of hope for Greece.

ICCT – Not Every Tonne of Aviation CO2 is Created Equal

A look at more precise numbers concerning who is flying and how much. By Sola Zheng, Associate Researcher at ICCT Cross-posted from the ICCT Website As concerns about climate change lead countries, companies, and individuals […]

5 March 2021 was the 150th anniversary of the birth of Rosa Luxemburg, the great revolutionary socialist of the Polish-German labour movement.  Luxemburg’s contribution to socialist ideas and to the struggle to replace capitalism is […]