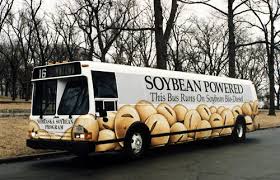 Few environmental topics are as confusing as biofuels. We all understand that things like recycling, solar panels, and efficient cars are good for the environment. But biofuels? Over ten years ago the media, the UN, and environmental organizations were telling us that biofuels combat climate change while helping the poor – and now we’re hearing that biofuels are as dirty as petroleum and raise food prices. How did the story change so much, and what are we supposed to think about things like “advanced biofuels” and “biofuels made from wastes?”

Biofuels are confusing because they’re complicated, and they’re complicated mainly because of indirect effects. It’s similar to the unintended consequences of hydropower stopping salmon from spawning upstream, or windmills killing birds … except way more complicated. Biofuels almost always affect how land is used around the world. The basic theory is that any carbon combusted into the atmosphere from biofuels was first sequestered by plant growth, so there’s no net change in atmospheric carbon. But that only makes sense if someone is growing plants in an abandoned parking lot. It takes a lot of land to grow biofuel feedstock, and that land is either (a) newly converted from forest or grassland, or (b) already used to grow crops for food. In scenario (a), direct land use change by cutting down forest or digging up grassland releases a lot of CO2 from biomass and soil, and harms wildlife. In scenario (b), diverting food to biofuel drives up the price of food and leads to indirect land change by someone cutting down forest or digging up grassland to plant more food somewhere else in the world. In energy generation, as in everything else, it’s hard to get something for free.

So however you slice it, land-based biofuels cause land use change emissions and, when you add emissions from transporting and processing the feedstock and fuel, the total lifecycle emissions from these biofuels in most cases start to look a lot more like the level of emissions generated by burning petroleum. For example, EPA estimates that, including land use change emissions, corn ethanol only offers a 21% greenhouse gas (GHG) reduction compared to gasoline. It’s worse for biofuel made from vegetable oils like soy or canola, because increasing the prices of these oils leads food and soap manufacturers to switch over to palm oil, which drives very high emissions from tropical deforestation. On the other hand, energy crops like switchgrass or short rotation poplar are associated with low indirect land use change because they are not valuable enough to compete heavily with food crops on agricultural land and because they actually increase soil carbon where they are grown.

What about biofuels made from feedstocks that don’t use land, like wastes? Well, it matters what kind of “waste” we’re talking about. Agricultural and forestry residues like corn stover, wheat straw, and twigs and leaves do offer high GHG savings, but only if they’re harvested sustainably, leaving some material on the ground to prevent erosion and soil carbon loss. When it comes to other wastes, very few things are actually thrown away on a large scale. Used cooking oil is a good example – it sounds like something you throw away, but in the U.S. most used cooking oil that’s collected is fed to livestock. In the EU used cooking oil is discarded if it’s not used for biofuel due to mad cow disease concerns. If American used cooking oil is made into biofuel, we must find something else to feed our cows, which means more corn or soy oil, and therefore more land use change. Here we go again!

Things are about to get even more complicated. The more biofuels we produce, the more we increase the global fuel supply, which lowers gasoline and diesel prices and leads to people driving more. It’s the dreaded rebound effect, referred to in academic literature as indirect fuel use change. What this means is that the GHG benefits of a biofuel that’s only slightly cleaner than petroleum are wiped out by increased use of gasoline and diesel. When indirect fuel use change is taken into account, only biofuels that offer high carbon savings, such as cellulosic biofuels from corn stover or switchgrass, really have any climate benefit at all.

So where do we stand on biofuels? It’s still complicated, but to help us keep things straight, here are some principles we follow at ICCT:

Corporate Europe Observatory – COP23: From the coal mine to the conference centre

The UN Climate Change Conference in Bonn began on 6 November. It is interesting to note that Germany’s reputation as an environmental leader is based on anything but facts. Protestors decided to highlight this hypocrisy. […]

A lot of interesting insights into the current development of China up to today. Branko Milanović is an economist specialised in development and inequality. His newest  book is “Capitalism, Alone: The Future of the System […]

It is no wonder that mainstream media bombards us with how important, valuable, and noble capitalists are – because they aren’t. Richard D. Wolff is professor of economics emeritus at the University of Massachusetts, Amherst, […]