This applies to much of Europe, which has been the target of property speculation for decades.

Jeremy Smith is co-director, Policy Research in Macroeconomics (PRIME), and barrister. He is a co-editor of Rethinking Britain 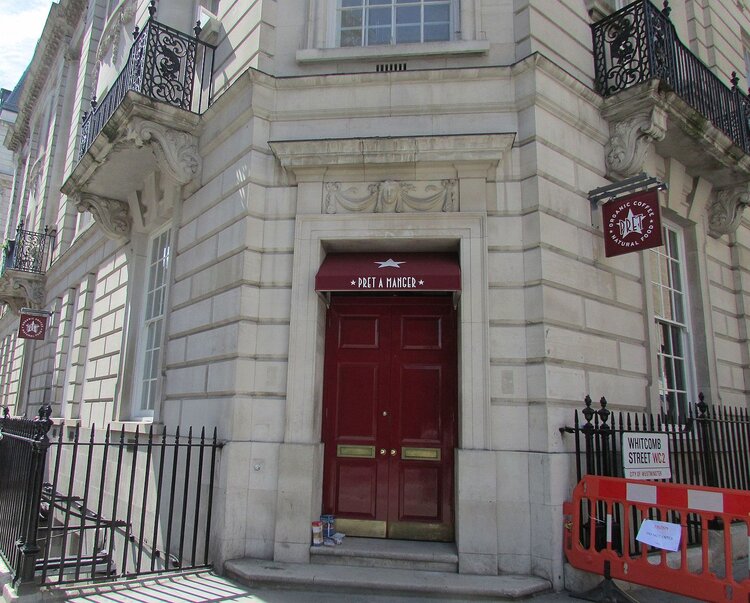 Closed door at Pret… Image with acknowledgment to Wikipedia and Theworldgymnast1

The government wants us to return to our office workplaces in the cities.   The FT tells us:

“The government will [this] week launch a media campaign to encourage more employees back to their workplaces amid growing concern in Downing Street over the rising number of job losses at service businesses in city centres that are reeling from a lack of customers.

“Just one in six workers have gone back to work in cities this summer after companies and staff ignored government pleas to return, leaving economic activity deeply depressed and placing thousands of small businesses at risk of collapse….[W]orker footfall in Britain’s cities was just 17% of pre-lockdown levels in the first two weeks of August.”

The Centre for Cities’ “High Streets Recovery Tracker” shows just how far below ‘normal’ some of our biggest cities still remained by mid-August, in terms of footfall and spend levels – with London at the foot of both tables (see table at end of this article).

The concerns expressed are that a whole ecology of city centre businesses may be killed off: “Hospitality companies that thrive on footfall, and services such as hairdressers, dry cleaners and cobblers reliant on workers, could be devastated unless cities return to normal”, says Sky News.

We can indeed worry about the future of so many small businesses – though it is not only small businesses that are affected.  On the contrary, in recent years our city centres have been increasingly colonised by the big chains providing blandly standardised products of greater or lesser quality – and they are also hard hit.

We read, for example, that “Sandwich chain Pret a Manger is to cut 3,000 jobs, or more than a third of its workforce, as part of a plan to save the business.” (BBC News, 27 August).

Now the French adjective “prêt” means “ready”, as in Ready to Eat, or Ready to Wear (“Pret A Porter”).  But it also has a second meaning as a noun – that of “loan”.

And we can be pretty sure that the government’s major concern for our cities is far more about this second meaning  than about the downsizing of the sandwich-dispensing Pret and its like.  For what is at stake is not only the commercial viability of our retailers and service providers (many of them debt-laden), but also of the landlords and commercial investors who will be hit by any mass closures, and whose business model is based on debt and leverage.

In simple economic logic, if many more workers work from home, but spend the same amount on purchase of goods and services in or from Home Town rather than in Big City, then the loss of jobs in Big City due to this decline in custom should be compensated (to respond to the gains elsewhere) by the creation of a similar number of jobs in Home Town, or wherever the online retailer may manifest its terrestrial presence in the form of dystopian “Fulfilment Centres”.

In short, workers and the proprietors of smaller or weaker businesses must always put up with the consequences – notably unemployment or bankruptcy – of technological and other trends that affect longer-run economic life.  That has always been the logic of the Treasury and the Free Trade lobby, and for sure of Conservative governments over the decades.

The deeper fear of government and its financial supporters is not just about the survival of the urban service business ecology, but about commercial property, largely debt-financed.  The loss of some coffee shops and dry cleaners is sad but undoubtedly bearable, in economic terms.  But if large businesses start to downsize their offices and reduce their holdings whenever leases expire or break clauses permit, it is the commercial landlords who are at risk.  More than that, the whole economy is geared towards asset price inflation, supported by central bank QE, which in general terms works to increase the valuation of physical as well as stock market assets. A continuing rise in asset valuations in turn leads to greater borrowing and lending in response.

If commercial property values fall sharply, the ability to raise and repay loans will be affected.  At present, London and Manchester are the cities most affected by the absence of workers, footfall and spending – and are among the UK cities with the highest commercial rental values.

In a June 2019 report for the Shawbrook Bank , the Centre for Economics and Business Research (CEBR) found that

“Overall, the returns on commercial property [a £900 billion sector in 2019] are high compared to other asset classes. Between 2000 and 2018, commercial property returned 308% compared to 209% for the FTSE 100…Average yields across all sectors have been stable in recent years remaining nearly unchanged at 5.0% since 2015. As of early 2019, the retail sector showed the highest yields at 5.7%.”

The retail property sector was already under pressure, the CEBR unremarkably note, due in particular to the trend towards online shopping, and office property was thought a good prospect save for the effects of a no deal Brexit.  Warehousing (part of industrial) was seen as having better prospects, gaining from the trend to online retail.

In an ill-timed (as it transpired) article dated 19th February 2020, “What can we expect from the UK commercial property market as we start a new decade?”, the Head of UK Offices Insight for Cushman & Wakefield, Patrick Scanlon, argued that city centre commercial properties were likely to keep doing well:

“After the global financial crisis, the UK has enjoyed a decade of economic growth, with little hint of recession in sight. The UK commercial real estate market has also flourished. Investors have deployed more than £500 billion of capital across all property sectors, while office occupiers have acquired more than 160 million sq ft of space. Values in many markets are now at all-time highs.”

The FT’s “The Big Read” this weekend (30 August) is headlined, “Pandemic exposes ‘severe stress’ in commercial property financing”.  True, it focuses on the US market, and the hotel sector in particular, but underlines “…the pressure building across the commercial real estate sector — from small-town malls to sky-high office blocks — hitting one of its primary sources of financing; the $1.4tn market for commercial mortgage-backed securities.”

“The mortgage payments on the property, or properties, are then used to repay investors, such as fund managers and insurers.  Those investors are now bracing for losses, sitting at one end of a chain of turmoil that links millions of workers suddenly without jobs or furloughed after hotels, shops and offices closed their doors, to building owners in the middle, facing the prospect of handing the keys over to their lenders.”

The UK CMBS market may not be as risky yet as the US one – at the end of June, S & P published a report on European (in practice mainly London) office-backed CMBS Transactions in the aftermath of COVID 19, and concluded that “tranches rated in the ‘AAA’ and ‘AA’ categories can withstand increasing vacancy rates with little risk of downgrade, while lower-rated tranches are more vulnerable in higher vacancy stress scenarios.”  In general, they saw the problem as limited, if vacancy rates increase by no more than 10 percentage points.

As yet, the sector has not seen a collapse of anything like the scale of the Great Financial Crisis; according to Savills, the sector had seen an annual fall in commercial property values in May of 7.2%.

But London appears to have deeper problems, and may find it hard to recover. Doug McWilliams, deputy chairman of the Centre for Economics and Business Research, was reported in the Evening Standard (13 July) as saying that he expected London commercial property prices to fall by up to 30%. “Bearing in mind the fact almost no one is paying rent at the moment that is a huge hit,” he said.

But while the sector will take its time to adjust (since tenants who are not insolvent are locked in for sometimes lengthy terms), and will be coy to acknowledge falling capital values, the future for big city centre commercial retail and office sub-sectors does indeed look bleak.  I don’t believe in an office-free future for service companies – but the average size will fall dramatically and leave the market over-stocked.  This in turn will lead to a move to (re)turn commercial to residential uses, or to lower capital values and lower rentals.

How much the Big City falls in commercial property will be compensated elsewhere in the country is hard to tell at this point, and will doubtless depend on the overall fate of the economy.

Meanwhile, commercial rents and loan interest payments will be falling due.  But are our businesses yet Pret A Payer?

Table – from Centre for Cities

The recent declarations of new European Central Bank president Christine Lagarde on the possible role of her institution in the fight against climate change have revived pushbacks from central bankers and financial commentators against “green quantitative easing”. However, the […]

Anne Dufresne, activist for gig workers’ rights and member of the GRESEA research group, gives a critical perspective on Uber’s recognition agreement with Belgian union UBT-FGTB, the first such agreement in the EU. A longer […]