We might well be approaching a financial and economic crisis comparable to the Great Financial Crisis of 2007. Thus it is important to develop an alternative to saving the old, destructive neo-liberal system as happened then. We will be concentrating on this in the next days and weeks. We won’t be fooled again. 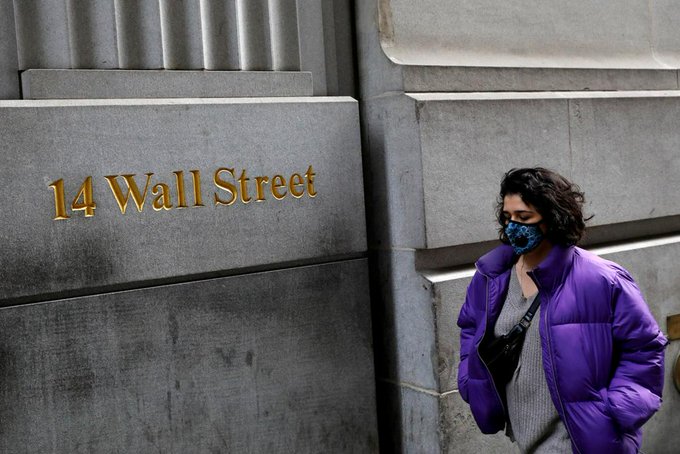 Extraordinary measures are needed now to stop the health effects of the Coronavirus triggering a financial crisis that could in turn make the Coronavirus worse. All of these actions can be undertaken by Central Banks and financial regulators, once they have been given permission by governments. Two of these measures are already being undertaken by some Central Banks:

Europe was embroiled in World War I at the outbreak of the Spanish Flu. Its health and population impacts were huge: estimates of the death toll vary between 40 and 100 million in a global population of 1.8 to 1.9 billion.

Here I want to focus on its financial effects. They were mild, because the great financial crisis of the 20th century, the Great Depression, lay ten years in the future. Disruptions to life were extreme, but disruptions to the economy were relatively small, and it was a war economy anyway for much of the world. This meant there was guaranteed employment and wages for military personnel, rationing for the general public, and other wartime measures. All these things limited the financial contagion from the medical contagion. Crucially, private debt was a mere 55% of US GDP when the flu outbreak began. The private sector was relatively robust. 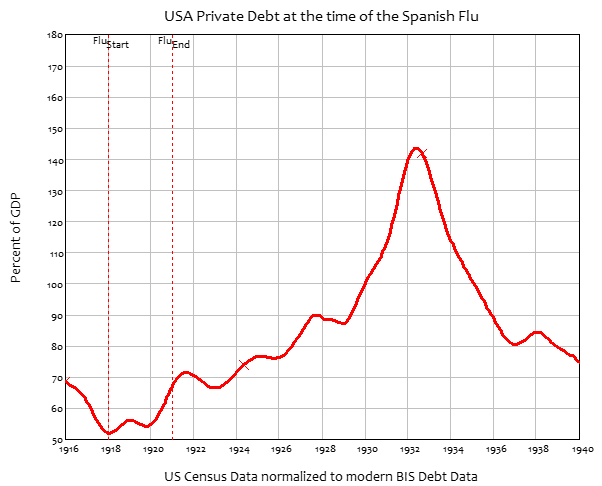 The situation is vastly different today. In particular, our great financial crisis, the “Great Recession” or “Global Financial Crisis”, lies in the recent past, and its primary cause is still with us: US private sector debt is just 20% of GDP lower than its peak during the crisis. This is three times higher than at the time of the Spanish Flu. 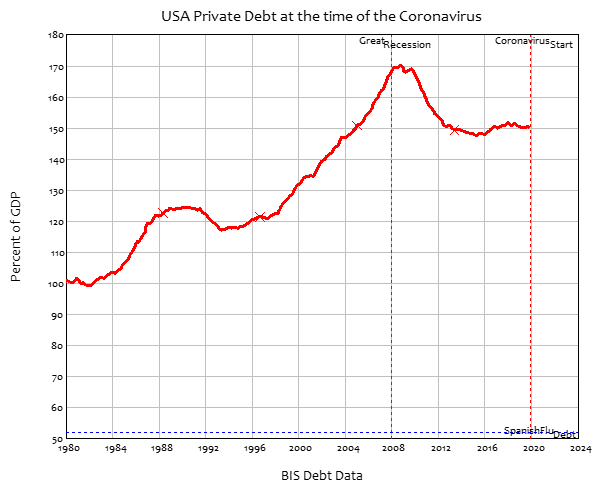 In addition, we are in a peacetime economy, and one vastly different to that of the Spanish Flu. In place of military employment, we have “the gig economy”. Many people work at precarious jobs, especially in industries which are likely are likely to be hard hit by the Coronavirus: health itself, entertainment, restaurants, tourism, education. They could lose their jobs, and be unable to service their debts or pay their rents, or even buy food.

Many of their employers could also be unable to service their debts. Corporations are now more indebted than they have ever been, even during the Great Recession: the fall in private debt has occurred in the household sector, rather than the corporate sector. Corporations in the USA have levered up during the period of Quantitative Easing, pushing the US corporate debt to GDP ratio to an all-time record. It is also twice the level that applied during the Spanish Flu. 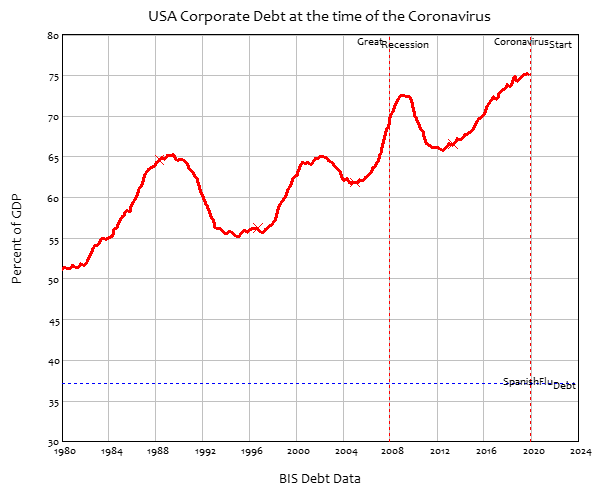 As the Coronavirus reaches its peak, many corporations will find their cash flows dry up. Under the financial rules of normal times, many will find these debt levels crushing. They may be forced into bankruptcy, and they will certainly lay off staff.

The production system is also more vulnerable than at the time of the Spanish Flu. The global economy today is reliant on extremely long and complicated supply chains, with many goods being produced from components manufactured in dozens of countries, and shipped between them on container vessels. If manufacturing in even one place (such as China) comes to a near standstill, production elsewhere will do the same. “Just in Time” manufacturing methods will run out of inputs, even if their factories are still capable of operating. Shipping could be affected if, crews refuse to undertake trips that can take weeks with potentially asymptomatic carriers on board, or if crews are quarantined for two weeks prior to departure.

Shares are likely to plunge in value. We have already seen a 14% fall in the S&P500 (though followed by a 5% rebound on Monday March 2nd). This is before the Coronavirus numbers have really taken off: it will get much worse as they do. John Hopkins University is the source of the next graph. We are clearly in the exponential phase of the pandemic. It will ultimately taper, but at present the number of cases outside China is doubling every 2-6 days, depending on the country.

Banks will also suffer badly. The asset side of their ledgers includes corporate shares: if these fall in value, banks will find their assets plunging, while their liabilities remain constant. A private non-financial company can continue to operate, so long as it can pay their debts as and when then fall due, so they can operate for a time with negative equity: their liabilities can be greater than their assets. But a bank cannot: it must have assets that exceed its liabilities, or it is bankrupt.

A credit-driven, private sector monetary system is not capable of handling a systemic crisis like this.
In fact, if the rules of such a system are enforced, it will make the crisis worse. Renters and mortgagors will be evicted, putting them on the streets, where they are more likely to catch and transmit the virus. Personal hygiene and public health will suffer, when one is needed to slow the pandemic, and the other must be functional to support its current victims. Stock markets will crash. Banks themselves will fail as their shareholdings plunge in value, bringing the payments system to an end. Even those unaffected by the crisis will be unable to shop.

It is, on the other hand, possible for Central Banks and financial regulators, once authorised by their governments, to take actions that prevent the medical crisis from becoming a financial one.

Others mechanisms may exist, but these are the obvious ones to prevent a financial pandemic on top of a medical one:

1.    Make a direct payment now, on a per-capita basis, to all residents via their primary bank accounts (most effectively, their accounts through which they pay taxes). 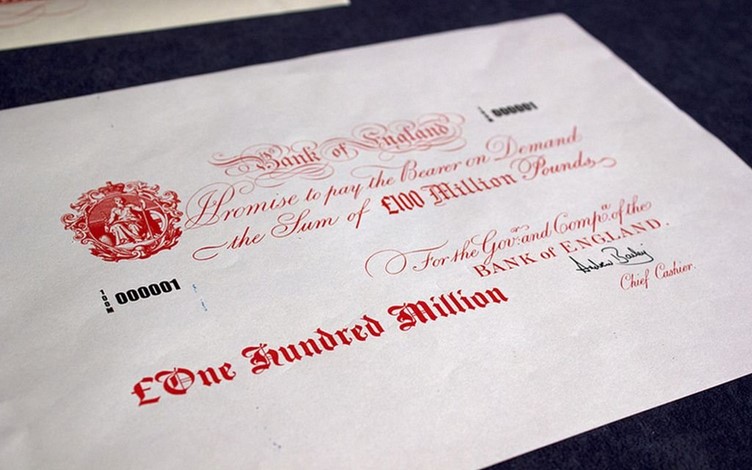 The same could be done by any Central Bank to balance a direct cash transfer to the bank accounts of all residents of its country. Frances Coppola makes the case for this in the general case of a financial crisis in her book People’s Quantitative Easing (Coppola 2019). This power could be used now to stop a financial crisis happening in the first place.

The payment should be per capita—as it has been in the country that has already done this because of the crisis, Hong Kong. The payment there is HK$10,000, or roughly US$2,000. It does not need to be financed by the Treasury or by taxation: neither were used by the USA to support its $1 trillion dollars per year Quantitative Easing program. There will be no “debt burden for future generations”.

Instead, Central Banks should directly buy shares, as they are also quite capable of doing: Japan’s Central Bank has been doing this for several years already. This puts money in the bank accounts of shareholders, while the shares are then owned by the Central Bank. In terms of the Central Bank’s balance sheet, this would be identical to Quantitative Easing now: the only difference would be that the assets would be shares, rather than bonds.

Central Banks can also cope with a share market collapse in a way that private banks and financial institutions cannot. Unlike a private bank, a Central Bank can operate with negative equity. If there was still a stock market crash, a Central Bank holding shares would still be able to operate.

Banks and financial institutions in particular are vulnerable to bankruptcy in this crisis. A plunge in share values could rapidly push them into negative equity. Non-financial companies which are heavily exposed to the pandemic—health companies, airlines and other transport firms, education providers (including many public universities reliant on student fees), restaurants, sporting grounds—could see their revenues plummet, making them unable to service their debts, and therefore liable to bankruptcy.

Until the crisis passes, the normal rules of bankruptcy should be suspended

Corporations exposed to Coronavirus-driven losses of revenues should also be able to receive direct aid from Central Banks as well. This could take the form of the sale of newly issues shares in return for cash—it should not be in the form of debt, which would simply replace one problem with another.

Juan Laborda – The Coronavirus and the End of Neo-Liberalism

The Covid-19 is simply going to accelerate the process of global change in China’s favour Juan Laborda teaches Financial Economics at the University of Carlos III and Money and Banking, Syracuse University (Madrid) Originally published […]

As global debt inexorably increases due to COVID and many people can no longer pay their debts or are being forced to take out new ones, is it time to wipe the slate clean? Steve […]

Politics is no longer a question of values, but of opportunism. Matteo Salvini is not the exception, but as we saw with today’s election of Urusla von der Leyen as President of the EU Commission, […]