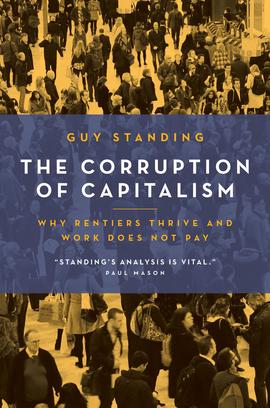 In 2011 Guy Standing wrote a book titled “The Precariat – The New Dangerous Class”, which showed great prescience. By the second paragraph he had already predicted what would soon emerge:

The result has been the creation of a global ‘precariat’, consisting of many millions around the world without an anchor of stability. They are becoming a new dangerous class. They are prone to listen to ugly voices, and to use their votes and money to give those voices a political platform of increasing influence. The very success of the ‘neo-liberal’ agenda, embraced to a greater or lesser extent by governments of all complexions, has created an incipient political monster. Action is needed before that monster comes to life.

Most of us now, in 2017, understand that his nightmares have already begun to materialise.  The path of social destruction created by neo-liberalism has eroded the economic situation of millions of people so far that they are turning to political leaders whose policies threaten democracy.

Standing is back with “The Corruption of Capitalism – Why Rentiers Thrive and Work Does Not Pay”.  It explains how what academics call the “rentier class” –roughly speaking, wealth extractors, as opposed to wealth creator is systematically destroying democracy by manipulating the market and government.  This has been the case for a very long time: but it took the public bailout of private banks in the Great Financial Crisis, and the use of austerity not to resolve the crisis, but to hasten the neo-liberal agenda, the result of which we see in the increasing disparity in the distribution of wealth. Standing cites a well-known study by Oxfam from 2010, that 388 individuals owned as much wealth as the bottom half of the world’s population — then points out that by 2015 this was down to 62 people. In 2016, after Standing’s book was published, it was just eight men.

This is a sweeping economic analysis over a wide terrain, weaving a clear picture of neoliberalism’s destructive energy and its rise to power. Inclusive capitalism in the developed nations in the 1950s and 60s, characterised by rising productivity and rising wages, morphed into “rentier capitalism”, whose tools include subsidies and taxes, debt, the misuse of patents, the privatisation of the commons, labour market flexibility, political corruption, and so on. Institutions such as the World Bank, the IMF, and the World Trade Organisation bolster the system, along with trade and investment treaties to serve rentier interests, enforced by extrajudicial investor-state dispute systems protecting the interests of big business against national governments.

The profits go to an ever smaller group: a rapacious, wealth-extracting minority who, in the memorable words of Rolling Stone’s Matt Taibbi, get rich by behaving like “a great vampire squid wrapped around the face of humanity, relentlessly jamming its blood funnel into anything that smells like money.” All of this is, Standing says, represents “the most unfree market system in history”.

That particular grand claim is debatable, but the details aren’t.  It is not just the FIRE economy (Finance, Insurance, and Real Estate) that is the source of this sickness – though that’s a big part of it. Standing also identifies New Technology as a key problem. While he does not see technology necessarily as a job killer, it is a key element in destroying the “old income distribution system”.   The ubiquitous Gig Economy, with its digital service platforms like Uber, Cloud Labour, and On-Call Employees, are not creating jobs but are a technological disruption of traditional occupations.  In the emerging platform capitalism, the winners take a high percentage of what customers pay, while not supplying their “taskers” with job security, insurance, or pensions. Salaried employees disappear, to be replaced by a “precariat”.

The implications for democracy aren’t hard to see. What is always so satisfying about Standing’s work and books is his ability to leaven his economic analysis with politics and sociology, which he successfully does in his last two chapters.  The corruption of politics and the institutionalised manipulation of democracy: it is amazing how many economists ignore this.  Neoclassical economists do not have a formula for it. It does not compute.

In his final chapter Standing proposes a solution to the crisis to prevent the collapse of democratic society: a reversal of the pernicious economic developments of the past fifty years, the creation of democratic wealth funds, and the introduction of a basic income. The latter is something that Standing has been working on at a practical level for decades, as well as advising governments on the subject.

The Case for a Four Day Week By Anna Coote, Aidan Harper, and Alfie Sterling