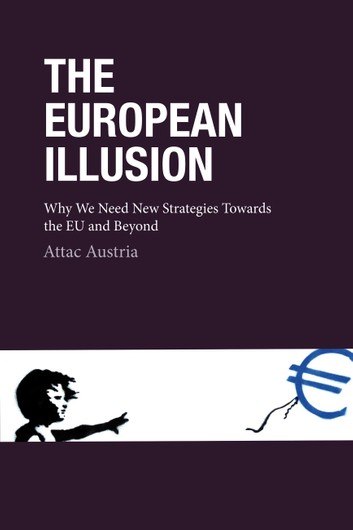 It takes courage these days to write a book critical of the EU, especially from a leftist perspective: to do so in Austria even more so. Austria, like Germany, the Netherlands and a few other nations is one of the true winners of the EU regimen – if you are in the right social class. As one of the authors explains: “It´s almost impossible to express your opinion on the EU without being backed into a corner. As soon as I question the institutional make-up of the EU, I am deemed a nationalist.” In Germany and Austria, because of their fascist past, being a “nationalist” is tantamount to being a neo-Nazi. Moreover, most of the authors are academics. In northern Europe academics can put their name to any old rubbish, be paid to publish papers to further corporate and other particular interests, but they are not supposed to be overtly political, especially if they have leftist leanings. The book does not pull any punches. In its critical analysis of the EU it is radical, although the consequences it draws are not those one might expect. The fact that this group of authors have written this book at all is remarkable.

The introduction comes straight to the point: “The historical enforcement of neo-liberal integration in the EU”, whose main goal is not to be an instrument of integration – as claimed by the EU elite, and repeated ad nauseam by state and corporate media – is in reality “primarily a driver of division”. It does not bring prosperity for all, but instead for the few, leaving ever more people with poorly-paid, insecure jobs. As the authors explain, the EU does not have a framework to promote a “democratic, ecologically sustainable, socially equal and gender-equal economic system.” This then raises the question: Who really is pro and anti-European, the EU or its opponents? Although the authors do not believe that a reformed EU is possible, they equally dismiss dissolution, which they believe would bolster extreme right forces, offering their own solution.

The first section of the book, “Analysis”, covers twelve policy areas of the EU, from agriculture to wage policy. It thoroughly and systematically analyses the neo-liberal and reactionary policies of the EU and is excellent as a reference work for critical assessment of the EU. Unfortunately in neither the English nor the German versions of the book is there an index, so secure a good supply of sticky notes and a new yellow marker pen before reading. Another shortcoming of this section is the fact that the authors have covered the topic for so long that they fail to explain certain names and facts. In the chapter on wage policy for example, the crucial European Court of Justice rulings on Viking and Laval are mentioned, but not elucidated. As the book is supposedly written for a broad public, this is unfortunate.

The second section of the book, “Implications”, is presented in a less formal manner with a series of interviews by the authors with each other. Its focus is more the practical application of argument critical of the EU – a sort of primer. It concludes with Attac Austria´s own position on the EU and the political policy it deems best. Attac dismisses DiEM 25, and other groups calling for democratising and reforming the EU, as illusory: “Even if everything went as planned, a progressive draft constitution would never be implemented by the elites. They would rather pull the plug on the EU than do that.” With regard to Lexit, a leftist movement calling for the dissolution of the EU, they feel that “the opportunities tend to be overstated and the risks underestimated”. Their answer is a broad grassroots movement, “an effective counterpower”, via social movements, democratisation and politicisation, which is explained in more detail in the next section of the book.

The third and final section of the book can be characterised as very Austrian and very academic. Entitled “Strategies”, it is a tutorial for activists seeking the grassroots revolution they envisage. Here things become more difficult as the authors get bogged down in arbitrary detail concerning what positions one should represent, what vocabulary one should use (terms with positive connotations, which reminds one of the inane discussion concerning the terms “glass half-full” and “glass half-empty”). The campaigns against the two trade treaties TTIP and CETA are presented as half victories, whereby the authors cannot bring themselves to admit that it was not the European citizenry that blocked the first, but Satan himself: Donald Trump.

In the chapter entitled “Food Sovereignty:  Cultivating resistance and alternatives from below” cultural obstacles begin to appear. Austria is probably the most progressive European nation regarding the quality of its food production. Organic and non-genetically-manipulated food is strongly supported there. Any threat to this – such as the EU caving in to US agricultural standards – would mobilise large parts of the Austrian people. This is more the problem of an affluent society. In Britain, where parents go hungry to feed their children, or where fresh fruit and vegetables are a luxury for the poorest. The same is true in other European nations, especially for the millions of victims of austerity. It is no surprise that the campaign against TTIP in Germany and Austria was initially  about chlorinated chicken from America before major political issues such as investor state development settlements (supra-national tribunals through which investors can sue nation states for alleged discriminatory practice) came into the limelight. Attac Austria falls into the same trap that it has warned us about: the EU is not an entity, but a collection of nations and regions. No solution fits all, while most solutions are to the advantage of the most powerful EU states, especially Germany. Attac will probably also make no friends when it starts telling Austrian farmers and consumers that they must radically cut back on their meat and dairy production and consumption – no matter how the stuff is produced – to combat global warming.

Having dismissed the idea of reforming or disbanding the EU, the authors finally let the cat out of the bag in the chapter “Reclaiming Policy Space and Implementing Alternatives Through Strategic Disobedience”. As the title implies, municipalities and nations should employ “silent” and “offensive” disobedience. “Silent” entails surreptitiously breaking EU rules, “offensive” means following the examples of Hungary, Poland, and Italy. A confrontation with the EU “can put pressure on domestic politicians and demand that they break the rules”. This incidentally did not pan out with the OXI referendum in Greece. Still, it becomes clear that not only is the nation state back on the political agenda, but the authors also support disobedience by municipalities. As we know, the EU is aware of this too and is already expanding its powers to increase its reach into municipal governance. The whole chapter does not offer a convincing alternative to reform or dissolution.

This last section of the book is nevertheless worth reading. It demonstrates how different political cultures are in European nations and how a diverse Europe-wide citizens’ consciousness, thanks to opposition to the EU, is now developing.

Book review by Svein Hammer There are those who still quibble, but most now recognise that our way of living has brought us to the edge of a cliff, where the threat of global crises […]

Just as Angela Merkel’s reputation as the world leader of Liberal Democracy – not difficult while Donald Trump was in office – is fading following a series of fiascos, she has been outflanked by the […]

The People Vs Tech by Jamie Bartlett

Book review by David Beer   Is technology undermining democracy? Do we ever really know how we arrive at our political views? The pixelated vision of the near future offered in Jamie Bartlett’s new book […]