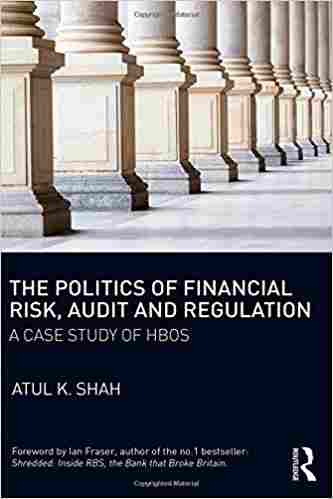 A book review by Prabhu Sivabalan

In The Politics of Financial Risk, Audit and Regulation: A Case Study of HBOS, Atul K. Shah examines the HBOS collapse of 2008, and uses it as a platform to more broadly critique the ways in which finance is regulated by governments and the audit profession and conducted in practice, its uneasy relation to politics and authority and the manner of its teaching in tertiary educational institutions globally.

The HBOS collapse was swift and significant. 2001 witnessed the merger of Halifax Building Society and The Bank of Scotland: this coming together of two large financial institutions was valued at approximately thirty billion pounds. All that capital was wiped out seven years later following its collapse, at which point HBOS was taken over by Lloyds Banking Group with an additional 20.5 billion pounds required from the UK taxpayer.

Bank failures are infrequent but not new. We know many banks have failed, with corporate executives committing to learning the lessons of the 2008 financial crisis. This book, however, strongly implicates banking culture and the absence of ethics within the sector as drivers for much of the risk-taking that led to the untenable balance sheets that resulted in bank collapses and the broader financial market crises. To this end, Shah’s arguments will have many supporters. Indeed, much has been written in (understandably briefer) newspaper articles around the world that is aligned with what is being put forward in different sections of this book. But, crucially, Shah utilises a wide array of academic and practitioner references to make his points, and presents a broad range of factors in detail – something only a book author with the luxury of more pages can do. This will leave most readers impressed with the level of research that went into writing the book. Shah’s fundamental questioning of the legitimacy surrounding the pursuit of money is conveyed in a profound, definitional way. Reminding us that money is a social construct that functions as a medium of exchange, Shah nicely states that the symbol of value (money) has come to be seen as a value in itself. He then offers a series of explanations outlining how this root cause leads to incentives that many in the finance industry find too good to deny, but which has the effect of deleteriously affecting the underlying operational value, especially for clients.

Shah’s language is quite obviously emotive in its negative portrayal of HBOS and the broader culture of finance, but not in a manner that would cause readers to wonder at any natural bias. On page nine in the section ‘Taking it Personally’, he clearly and quite unambiguously explains his position. Here, I was struck by his passion for the inculcation of a more aligned culture and sense of ethics in finance.

I will emphasise the three themes of the book that especially impressed me. Firstly, the notion that the failure of the financial system is emblematic of the failure of broader external governance, implicating regulators and professions to a large extent. The will of these institutions to effectively carry out their respective mandates consistent with societal expectations is fundamentally questioned by Shah. He puts forward that connections between banks and governments and the former’s access to the corridors of power appear to leave many questions unanswered regarding the rigour with which regulator governance is undertaken. From an auditing standpoint, Shah similarly alludes to how unavoidable connections between audit partners and their clients, as well as the revenue model applied in the audit sector, drives incentives for auditors to consider their banking clients in the best light and possibly lend a less critical eye to events.  Again, these ideas are not new in their own right, but when linked to the broader failures in the financial system, they present new meanings and highlight potentially adverse consequences.

The second theme is the failure of organisational cultures as self-regulating mechanisms, and indeed, as Shah explains, as being a key contributor to the problem when profit is pursued at all costs. I could not help but think of the various Codes of Conducts in many financial institutions. While noble cultural expectations were codified, they were not carried out in practice. This plausibly raises questions concerning the possible failure of leadership at multiple levels of organisations.

Finally, as an academic, Shah’s arguments regarding the failure of ethics and the links to the way we train our future finance personnel in business schools left an impression. When individuals are not educated rigorously on the importance of ethics, one cannot but expect consequences, as revealed with the financial collapses of institutions such as HBOS.  The absence of a substantive exploration of ethics in leading finance and accounting texts will also be noted with interest by many academics.

The only point I might add to Shah’s writings is that there were national economies that were affected less adversely by the financial crisis, owing to the stronger application and enforcement of key banking activities by regulators. Lending regulations in Australia were (and continue to be) much tighter than in many countries globally, especially the USA.  Furthermore, many financial institutions have ownership structures that are not only shareholder-driven, but customer-driven in a community bank-type format.  A larger percentage of these institutions have more conservative lending practices and were not as badly affected when other large banks collapsed (such as HBOS) and panic set in the markets.

Also, upon reading this book, readers might be forgiven for thinking all managers and executives in the financial sector are driven to solely pursue profit at any cost. But many will know managers and executives themselves who genuinely attempt to do the right thing: there are more than a few ‘good apples’! Perhaps a chapter exploring this might have rendered more balance to the text, over and above the sporadic occasions it is briefly acknowledged in the book.

That said, I can understand the more negative perspective taken by Shah. While he might have studied the examples cited above, this book focuses on the HBOS collapse and the broader lessons that should be learned. To this end, I found the book an interesting read and one which does not disappoint. This is a text that finance professionals, academics, regulators and professional bodies can and should read, and from which they can take at least one really good idea to implement in their own work settings.

Perhaps my strongest compliment is that many a retiring regulator/parliamentarian might put some of the suggestions in this book in their leaving speeches as recommendations for others to implement. The challenge in broader economic society is anticipating these issues before they arise as well as having gatekeepers (regulators) with the foresight and fortitude to propose these implementations themselves. By making these issues more salient in the minds of readers, Shah just might achieve the same.

Dr. Prabhu Sivabalan is an Associate Professor at the UTS Business School.

Cross-posted from LSE Review of Books

The Politics of Financial Risk, Audit and Regulation: A Case Study of HBOS. Atul K. Shah.

Book review by Mathew D. Rose The subtitle of Jason Hickel’s book “The Divide” is something of an understatement. The book is neither brief, nor is it a guide. Instead Hickel has written a brilliant […]