Italy is still suffering politically from a completely inappropriate analysis of its economic situation by northern nations. This is because of the general economic ignorance in the North, but also due to specious prejudices against which our southern neighbours are struggling. 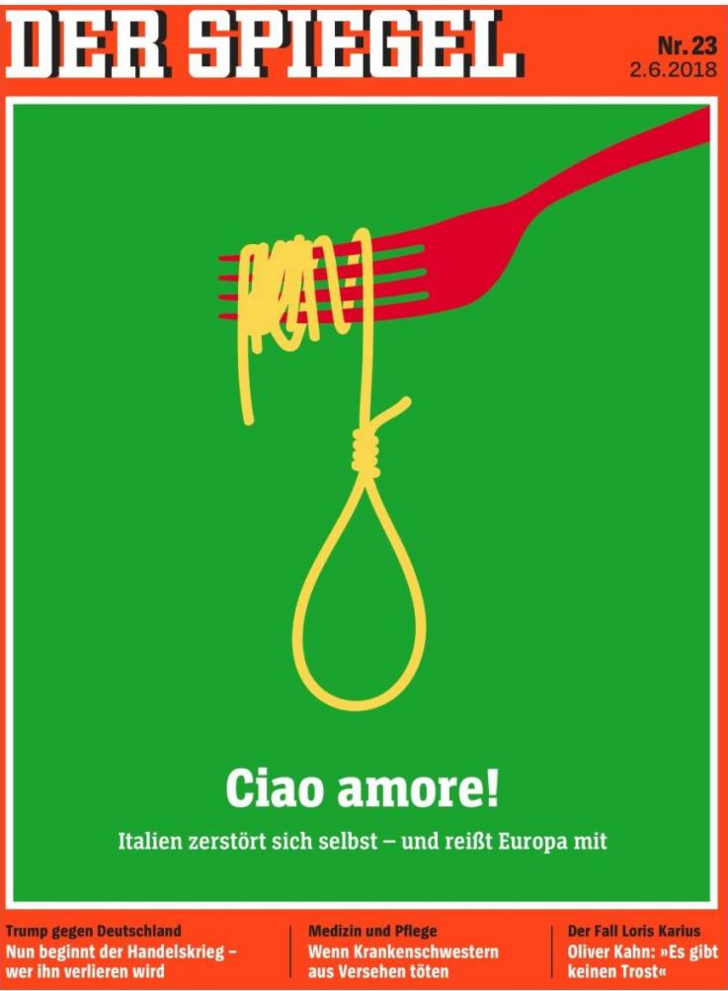 Translation: Italy destroys itself – and takes Europe with it

Two years ago, in a thorough macroeconomic review, I described the Italian disease (here and here) and described the country as the most seriously affected victim of the European attack on economic reason. The conditions have changed little since then, so that same analysis can still be used without restrictions. Today I just want to update a few elements without much comment and concentrate largely on the political analysis.

Nowadays it is often claimed that Italy has experienced an economic upturn in recent years, which is being jeopardised by the new government. Yes, there was improvement, but all is not as it seems at first glance. Looking at GDP (Figure 1), there is indeed a slight upward trend after 2014, but in view of the huge recession before, this is no more than the proverbial drop in the ocean.

The upward trend, as shown in Figure 2, comes quite clearly from the industrial sector, while absolutely nothing has been happening in the construction and retail sectors (we have recently shown this here) in Italy for years. In Italy, however, the situation in industry in particular has been so desolate, that the extremely weak recovery can hardly be called an upswing.

The surplus in Italy’s current account is often seen as “proof” that the country is not doing so badly and that it is not being damaged at all by Germany’s economic policy (Figure 3). But this is a mistake. Figure 3 clearly shows that the shift in Italy’s current account balance from a deficit (which was larger than the French deficit in 2010 and 2011) to a small surplus is the result of the recession that struck Italy again and particularly hard in 2011.

Looking at exports and imports separately (Figures 4 and 5), Italy – just like France – has seen some recovery in its exports in recent years. However, even after the global recession of 2008/2009, both countries are still lagging far behind Germany.

If you set the figures in 2009 at one hundred, as shown in Figure 5, this becomes particularly clear. It means that even at this time the path to a real recovery for France and Italy via exports was severely restricted by Germany’s export offensive.

As far as imports are concerned, one can see why Italy’s foreign trade balance, despite its surplus, is not really in better shape than France (Figure 6). In Italy, imports plummeted, especially after 2011, which was not the case in France. In France, imports have increased almost as much as in Germany.

The generally poor foreign trade performance of Italy (and France) cannot, of course, be explained seriously with buzzwords. And of course not by the fact (as we have shown many times) that German “savers”  wanted to “invest” their capital abroad. What could have prevented French and Italian savers from “investing” abroad? No, it is clear: the divergence in competitiveness that has emerged since the beginning of European monetary union is responsible for the large discrepancies in foreign trade performance (see this piece in particular).

The best way to measure a country’s competitiveness is to use the so-called real exchange rate, i.e. a (globally) trade-weighted average of differences in unit labour cost development and changes in nominal exchange rates (Figure 7). This shows that the devaluation of Germany, i.e. the improvement of its competitiveness, especially compared with Italy, had reached enormous proportions by 2009. But even today, there is still a gap of 20 percent separating Italy from Germany and preventing the country from taking advantage of the opportunities on world markets and in Europe that it could enjoy without this disparity.

It is also clear that this improvement in Germany’s competitiveness cannot be attributed to Germany’s “efficiency”, but solely to the fact that from the outset Germany has raised wages too little in relation to its own productivity and Italy too much (Figure 8). Italy, however, has now returned to its inflation target, while Germany is still well below it.

The biggest misunderstanding with regard to Italy (as in Greece a few years ago) is based on a general weakness of analysis. Many people who are not used to explaining concrete economic processes tend to use factors that are by no means transitory to explain a temporary weakness. These include corruption, excessive bureaucracy and certain forms of labour market regulation.

But this must be rejected from the outset as an unsuitable approach. As one Italian colleague once said: “Corruption has existed in Italy for at least two thousand years, but that cannot explain why the economy has not functioned in the past ten years.” In fact, none of these factors helps to explain certain temporary phenomena, since they have existed for decades and have not previously prevented the country from growing and creating jobs.

In the light of this, the vast majority of current opinions on Italy are at least as erroneous as those once applied to Greece. Just look at the cover of this week’s Der Spiegel, a popular German magazine. It is not only extremely tasteless and offensive to our Italian neighbours, but so thin in substance that the word “shame” cannot describe what one feels when confronted by such rubbish. Only one sentence in this whole rant suggests the authors have an inkling of what is going on

“Italy presents a sad picture, it stands for political failure, but also for the effects of the attempts to rescue the euro, which have strengthened the extremists, not only in Italy.”

Oh yes, Italy also stands proxy for attempts to rescue the euro. But who was that? Was Germany involved? And why does Italy not stand proxy for Germany’s misguided policy on monetary union from the outset? Hendrik Enderlein, professor of political economy at the Hertie School of Governance in Berlin, who shortly afterwards is quoted in Der Spiegel as a “good European”, has probably just “forgotten” what role Germany played and still plays in Europe.

As you see, the current situation cannot be explained with spurious arguments. Nor is it possible by applying the usual German denial of responsibility or with hollow, misconstrued arguments. If we make no serious attempt to depart from traditional economic concepts, Europe cannot be saved. After all, we should understand that German denial has become intolerable for our neighbours. In Italy there are a number of enlightened economists who understand the relevant economic connections. One must hope that the new government will not be impressed by the usual stupid German counter-arguments, but will loudly seek the attention of European public opinion to explain its case and Germany’s role in this disaster.

A Bologna court has ruled that a ranking-based algorithm used by food delivery platform Deliveroo is in breach of labour rights, in a verdict that has been hailed as an “epoch-making turning point” by an […]