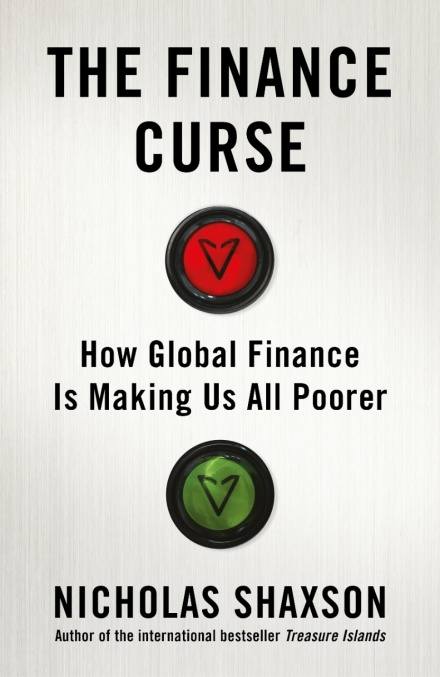 The problem outlined in this book has deep roots and it shows no signs of going away. The “finance curse” pervades many Western economies, from tiny tax havens to big countries like Britain with outsize financial sectors. In fact Britain is the worst affected of all, to the continuing detriment of its less rich inhabitants and the real economy.

Nicholas Shaxson, who has already tilted at tax havens in a previous book, Treasure Islands, now aims at a much bigger target. “Financialisation” is a curse which spreads its fingers into every facet of society. It means that the decision-makers and those who hold the power over many companies, or entire sectors, tend to set their sights on a perverse goal: to extract as much financial gain as possible from the business, in double-quick time, regardless of its health or success over the long term. If this seems like an exaggeration Mr Shaxson offers plenty of examples which take the breath away. In an engagingly chatty style he reels off anecdotes and thumbnail sketches of the most villainous: from John D Rockefeller and John Pierpont Morgan at the start, to more modern examples, such as Michael Milken the junk bond king and the geniuses at JP Morgan who first devised credit derivatives. But these are not lone villains: the sector, with all its agents, lawyers, accountants, even journalists, somehow conspires to re-inforce the process of financialisation – privatising gains and socialising losses.

Financialisation got an enormous intellectual boost in the 1960s from a bunch of thinkers in the US, including economists Aaron Director and Ronald Coase (actually a Brit) and Robert Bork, a lawyer – people this reviewer was not previously aware of. Their theories gave greedy entrepreneurs permission to go for maximum gain, regardless of the effect on their customers, their rivals, or the surrounding economy. Those views were reinforced by Friedrich Hayek and economists of the Chicago School, culminating in the application of free-market philosophies by President Reagan and Prime Minister Margaret Thatcher.

By the 1990s the ground was prepared for a financial heist, not only in Britain and the US, but also in Germany, France, Ireland, Switzerland, Iceland  – anywhere where the banking sector was allowed to grow assets close to or beyond 100% of GDP.

Ireland became tantamount to a kleptocracy led by its then prime minister Charles Haughey. Even centre-left politicians, led by Tony Blair in Britain and Gerhard Schröder in Germany, sought to justify financialisation as part of The Third Way.

The financial crisis of 2007 to 2010 hardly interrupted the onward march of financialisation. Banks failed to grow smaller or less complex, though they did add more capital, while accountants, lawyers, rating agencies and consultants continued flourish, dealing with the challenges left by the previous decade.

Mr Shaxson’s greatest scorn, however, is reserved for those who continue to financialise Western economies, particularly in Britain. They include the devisers and beneficiaries of trust funds, which allow the super-rich and criminals to own and control parts of the economy without having to reveal themselves; the managers of private-equity funds who load almost all the risk on creditors and other investors while helping themselves to fat fees and dividends; the devisers of private finance packages for public-sector projects, often overpriced to the disadvantage of the consumer and taxpayer; the politicians who favour tax cuts as a way to stimulate the economy: there’s no evidence that they do, says Mr Shaxson; the politicians who maintain that an outsize City of London has the effect of showering largesse on the rest of the economy. Actually, argues Mr Shaxson, it is doing the opposite: starving the provinces of economic opportunity and wealth.

His concluding advice is that the London financial centre should shrink. This would mean that Britain sidesteps the mad competition to remain the planet’s biggest financial hub and all the self-harm that entails. It would also spare Britain from kowtowing to the Chinese, since it would rely less on foreign investment.

There are many nuggets in this book. Mr Shaxson has a wealth of research and background material in his armoury which he uses to great advantage as he lays out his arguments. People who are part of the financial infrastructure – financial lawyers, accountants, bankers, private-equity managers (he describes them collectively as “the Blob”) – will find it uncomfortable reading. One target that Mr Shaxson largely spares is journalists – though he does have them, “bemused by complexity”, forced to rely on the Blob for biased information. Many of them play an important role in hyping financial wheeler-dealing, especially mergers and acquisitions. This reviewer was guilty for many years of giving financial wizardry the oxygen of publicity – until he saw how much of it was becoming intellectually, perhaps even criminally, dishonest.

Mr Shaxson believes that financialisation and the finance curse should be stopped, and that finance should be returned to its proper place, serving society. After reading his book few of us would disagree.

The Finance Curse by Nicholas Shaxson

The EU elections are over. Nothing is settled and Britain stands before a monumental dilemma – or two. David Shirreff is one of the founders and current editors of BRAVE NEW EUROPE. He is a […]

Book review by Mathew D. Rose The subtitle of Jason Hickel’s book “The Divide” is something of an understatement. The book is neither brief, nor is it a guide. Instead Hickel has written a brilliant […]