What is the gig economy, and what isn’t? How did it come into being? How is it changing work? The Gig Economy Project reviews a new introduction to the topic. 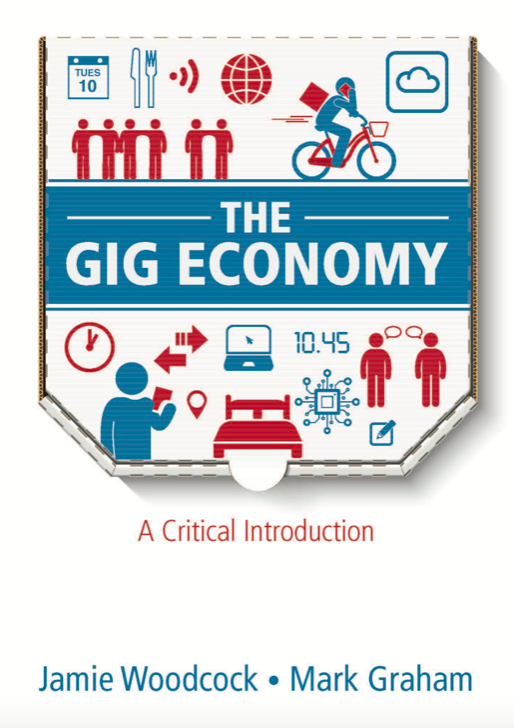 The phrase is now well known, but rarely defined. What actually is the gig economy? For Woodcock and Graham, in their compelling introduction to the topic, the gig economy refers to “labour markets that are characterised by independent contracting that happens through, via, and on digital platforms”. This independent contracting tends to be “casual and non-permanent”, and usually has “variable hours and little job security, involves payment on a piece-work basis, and lack any options for career development”.

The digital platform is the basis of gig work because it brings together supply and demand for labour in one easily accessible infrastructure, overcoming pre-digital barriers of time and space. The power of the platform for employers is that it allows for “new controls over the temporality [job duration] of work”.

“Workers have the freedom to choose when they would like to work, but the other side of that bargain means that precarity exists at a much finer scale than ever before (down to the minute), and competition is expanded to a scale never before seen,” Woodcock and Graham write. “This involves the expansion of the spatial scales of competition and the contraction of the temporal scales of the responsibility of the firm for its workers.”

It’s this feature of gig work which makes it different from classic precarity, like a dock worker who has to go down to the dock and try to catch the foreman’s eye to get work for the day. Relative security of work, with legal contracts providing a regular standard income, is the exception rather than the rule in the history of capitalism, occurring mainly in the west, and mainly in the post-war era. So it’s not precarity that’s new about the gig economy. What’s new is that the digital platform “creates an organisational form in which firms have an on-demand workforce that differs from previous types of precarious jobs”.

However, Woodcock and Graham resist a technologically determinist explanation of the gig economy’s emergence, instead arguing that a combination of political, social and technological changes explain the phenomenon. All in all, nine “preconditions” for the gig economy are identified: the digital platform infrastructure; the capacity for employers to measure work down to the second through digital processes (‘digital legibility’); the rapid role-out of mass digital connectivity worldwide (most importantly in the explosion of the smart-phone); consumer desires for personalisation and flexibility; gendered and racialised relationships of work (reflected in, for instance, the combination of gig work with unpaid care, which is an important feature of female gig work participation); a growing desire from employers and employees for flexibility; the establishment of neoliberal labour laws and other regulatory changes in favour of capital; a relatively weak trade union movement; and the impact of globalisation & outsourcing in increasing the control and state influence exercised by global platform giants.

Gig work is broken into “geographically-tethered work” and “cloudwork”, a dichotomy which is neatly explained in the following graph.

The differences between the two are significant. Geographically-tethered work (Uber drivers being the most well-known example) has more spatial proximity to one another due to the work being location specific. Therefore it is more visible, involves more possibilities for organising between gig workers and has a tighter labour market, strengthening workers’ bargaining power. The most high-profile forms of gig worker organising and resistance tend to have come in geographically-tethered work, though much of this remains outside traditional trade union structures.

Cloudwork is work entirely within the digital sphere, and thus is not location specific. Here, platforms exercise greater control over job duration, there is usually a huge over-supply of labour as the labour market is global, and the means by which workers can organise collectively are limited due to the restricted possibility of contact outside of the platform itself. The implications of this are profound.

“The untethering of work from place that this has allowed has meant that, for the first time, we potentially have a mass migration of labour without the migration of workers,” Woodcock and Graham find.

Of course, the internet is ultimately built on physical infrastructure, in which there remains a highly uneven quality and access worldwide. There are also cultural and educational differences in the global labour market which privilege western workers in the cloud work value chain. Nonetheless, the downward pressure on conditions due to the globality of the cloudwork labour market is important to recognise. For example, on a site like Freelancer, which claims to have 25 million workers signed up on the platform, hundreds of workers from all over the world can make ‘bids’ for one ‘task’, with the worker who can offer the lowest bid better placed to secure the work.

Online freelancing is the higher end of cloudwork, where a certain skill level (such as the ability to write well in English) is required. At the lower end is the microwork of fulfilling tasks which are slightly too difficult or too expensive to get robots to do. This work tends to be monotonous, repetitive, and pay tiny sums per task. The most well known example is Amazon Mechanical Turk, where ‘requesters’ post ‘Human Intelligence Tasks’ for workers, which for example could be a series of images and you have to explain what you see in them. The worker will usually not know who they are working for or what the purpose of the work is. Amazon calls this “artificial artificial intelligence’.

Remarkably, many cloudworkers, including microworkers, have developed means of organising with each other. 58 per cent communicate with other cloud workers at least once a week. The Turkopticon project was developed as an infrastructure to rate ‘requesters’, who can refuse to pay if they think the work was not done well enough. This turns the rating system back on the employers. Turkopticon also provides a forum for workers to discuss online.

“The importance of Turkopticon is that it shows workers can collectively organise on the platform…it is an embryo of new forms of digital worker organisation, subverting the tools that are used in the work process and finding new uses for them,” Woodcock and Graham find.

The authors combined experience in doing on-the-ground research on the gig economy spans the UK, the Philippines, Vietnam, Kenya, Nigeria, Ghana, Uganda, Rwanda, South Africa and India, and that internationalist depth of experience and knowledge is reflected in this introduction. One thing that strongly comes through is that for many workers, especially those in the global south, the gig economy does offer a freedom and pay rate which are often well in advance of other options available to them. For western workers, there can also be benefits, especially psychologically, as compared to work in a supermarket or call centre.

“You’re not selling yourself so there’s no emotional labour in it and I think that’s why it’s been like a job that I’ve stuck at longer than other shit jobs because I find it a lot easier to not do that sort of selling yourself side of things,” one Deliveroo worker is quoted as saying.

What this speaks to is the potential for digital technology to help liberate work, cutting out the need for layers of bureaucracy: line-management, the discipline of a performative work culture, and homogenous organisation, including hours of work. Unfortunately, gig work is still a “shit job” – the flexibility for the worker is more than matched for the employer, as most of the costs (equipment, training) and risk (injury, demand for services) are outsourced onto the worker. Income is never guaranteed from one day to the next. That generates a different kind of mental pressure to the traditional work environment; while a human boss may not be on top of you, the algorithm, and most pointedly the platform ratings system, enforces discipline of a different kind For Uber drivers, pleasing the customer to maintain a 5-star rating is a constant necessity to continue to secure work. Gig work displaces some of the pressures of traditional work, while generating new ones.

“The Fordism of the assembly line changed the place and time of work, seeking to treat workers like machines, transforming not only the factory, but society more broadly. Now the gig economy is changing the places and times of work too,” Woodcock and Graham find.

Is the gig economy the future of global capitalism? The Edelman Intelligence Corporation, an analytics consultancy that works for some of the world’s largest businesses, predicts it will make-up a majority of employment in the US by 2027. Woodcock and Graham are careful not to make grand claims about the future, but do highlight the fact that it has already disrupted many industry sectors at an astonishing pace. In the context of an economic crisis which has up-turned labour markets and brought the digital sphere into the centre of billions of lives, there is little reason to doubt its continued growth.

The authors do offer four futures for transparency, accountability, worker power and democratic ownership in the gig economy, to highlight “the beginnings of a range of strategies and ideas” to “bring into being alternative and fairer futures” for workers.

Woodcock and Graham’s introduction is lively, accessible and combines strong historical and theoretical under-pinnings while paying due attention to the experiences of gig workers themselves. It is a good place to start for newcomers to the topic, and those already familiar will I’m sure find something new in here too.

The Coming Crisis, Edited by Colin Hay and Tom Hunt

Book review by David Shirreff A good title does not guarantee a good book, and this one is good only in parts. Everyone would love to know where and when the next crisis will come, […]

Ben Wray – Three Months in, Work is already being Transformed by the Covid-19 Crisis

The Gig Economy Project looks at how work is changing in Europe three months into the Covid-19 crisis, finding that the combination of corporate lobbyists exploiting the crisis and the growing dominance of the digital […]

Ban this Book! A review of Daniel Markovits’s “The Meritocracy Trap” by Branko Milanović