The acquittal this week of Chief Superintendent Trapero, head of the Catalan Police, could mark a turning point in the judicial onslaught initiated in 2017 against the Catalan independentist movement. Trapero and his team had initially been accused of “rebellion”. But as the purported evidence deflated, the charges against him were subsequently reduced to “sedition”, then finally to mere “disobedience”, as prosecutors grabbed at their last straws to get the Catalan police chiefs convicted for the October 1st Referendum. Yet not even that brought about a conviction and the case ended up falling to pieces in the prosecutors’ hands.

The striking thing about this case is that the charges involved were almost carbon copies to those that one year before had earned 9-12-year prison sentences for seven members of the Catalan government and two social activists. Though some observers argue that Trapero may have been “spared”, for not being an independentist himself – there may be some truth in that – the fact is that the sentence has wreaked havoc in the official argument (which spoke of “sedition”, “rebellion” and “violence”) behind the mass convictions of Catalan independentists (2,800 so far prosecuted) in the past three years. It has also caused major contradictions between the two Spanish main courts involved in repressing the Catalan moment. Indeed, the Supreme Court and the “Audiencia Nacional” (the untranslatable court that is heir of the old Francoist Public Order Court) have alternatively condemned and acquitted defendants accused with very similar charges, witnesses and evidence. Like an Autumn mushroom – so dear to the mycologist Catalans – Trapero’s surprise acquittal has popped up centre-stage to proclaim that the Audiencia Nacional has seen no penal consequences in events and attitudes very similar to ones sentencing Catalan Interior Minister Quim Forn, and six other members of the Catalan government, to around ten years in prison each. The same “proof” presented by the same witnesses in the two courts has resulted in completely contradictory sentences. Can anyone explain this?

Two of the witnesses coming under most fire for this paradox are seedy Guardia Civil colonels, the likes of whom – both in uniform and in ideological profile – it would be difficult to imagine policing a normal democracy. Indeed, the sentence implicitly portrays colonel Daniel Baena as a liar for having declared that Trapero was made police chief by president Puigdemont in order to ensure an pro-indepéndence head of Catalan Police. This is quite false. He also stated unblushingly that president Puigdemont had not only held private meetings with Trapero, but that the Police chief also formed part of the “executive committee” of the independence Process. Again, these are claims that there is not one shred of evidence for.

What is true about Colonel Baena is that he is known to have played a most engaged political role on social networks. This became clear when he admitted – yet later denied – that he was behind the anonymous twitter account “Tácito”, from which he made all kinds of unprofessional and incriminating comments against independentist politicians. Certainly, this would have had serious consequences for him had he been a senior policeman in a more democratic country. But not in Spain. For now, Baena even seems to have got away with committing perjury in court to get political opponents framed, as has so clearly been the case.

The other colonel – Diego Pérez de los Cobos – placed in charge of police operations in Catalonia during the Referendum period, based many of his efforts to have Trapero convicted on “perceptions” he had that the Catalan police chief was in cahoots with the “rebels”. Not one ounce of solid proof did he provide, though. Funnily enough, and in contrast, many of the same perceptions he had come forward with in the 2019 Supreme Court trial had been more than enough to have seven members of the Catalan government convicted to long years in jail. 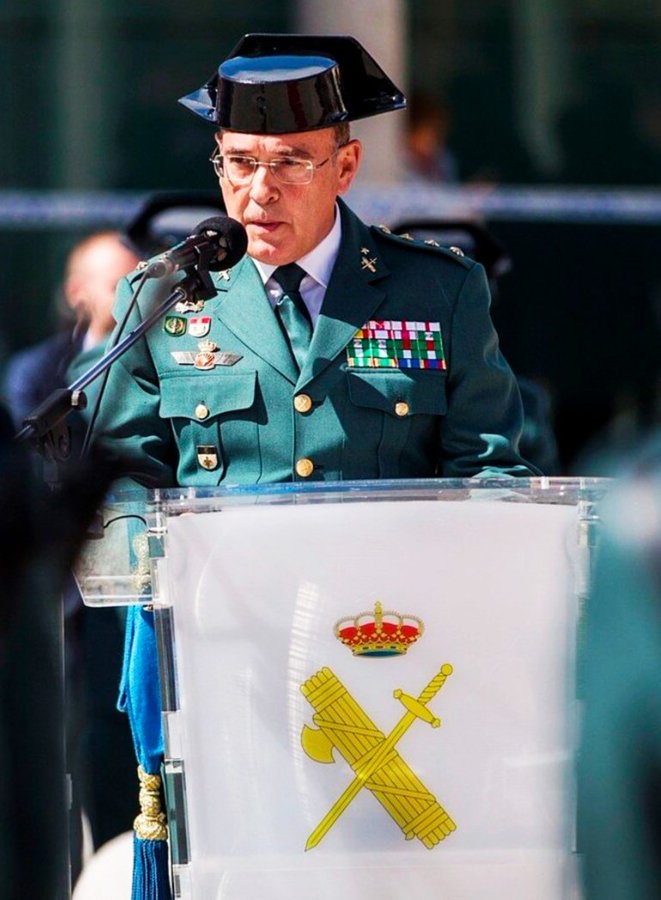 The exercise of reviewing the CV of this colonel, however, should be enough to make readers grasp the full implications of his controversial appointment by the then leader of the conservative Partido Popular, Mariano Rajoy. While in Germany police officers and agents have been suspended for collusion with the far-right, Pérez de los Cobos’ past allegiance to Falangist ideas (to the extent of direct involvement in the 1981 Coup) has been no obstacle to his continued promotion within the Corps. Yet few doubt today that it was he who ordered a Catalan court ruling (that no violence be used against Referendum voters) to be overlooked. It is clear that the bogus arguments and exclusion of key witnesses that occurred in the Supreme Court trial was not to get a replay in the Audiencia Nacional, though some observers also think the sentence has more to do with appeasing the EU institutions. Whatever the case, it cannot be overlooked that two of the three magistrates judging this case were fair professionals. This contrasts with the judge presiding the court, one Concepción Espejel – the wife of a senior officer in the Guardia Civil, a Corps which has publicly honoured her – who is infamous for the conviction of the Basque youths on trumped up charges of terrorism. They were condemned to up to twelve years prison for a bar brawl involving plain clothes Guardia Civils and in which no serious injuries were caused.

After this newest verdict was announced, president Puigdemont’s lawyer, Gonzalo Boye (see interview here) considered it highly unlikely that neither the Audiencia’s appeal court, nor the Supreme Court itself, would be in a position to overrule Trapero’s acquittal should the prosecutors insist on appealing. It is a step that would cause too much of a rumpus even in a judiciary as patriotically inclined as the Spanish one. That does not mean, however, that the situation is going to be comfortable for the judiciary. The contradictory criteria applied by the two courts is a question that will one day have to be resolved.

But that is not all. The sentence itself actually goes as far as to question the widespread use of police violence against thousands of voters at the Referendum, a novelty that truly throws doubt on Spain’s legal procedures. Many observers had not expected such a concern to be expressed in a major court ruling in Spain, thinking that this would not occur until the appeals were made in the Strasbourg or The Hague courts.

As several jurists have pointed out, this is a sentence that may well rock the boat as regards Spain’s untethered urge – so far, at least – to convict Catalan political activists and politicians at all cost. As Boye wrote in a recent article, “the independence referendum of 1 October 2017 does not stand for a series of offences but for a wide, massive, and collective democratic exercise that only those who live in the past can conceive of as something criminal. And now it is not only Europe that sees this.”

Michael Roberts: The euro – part two will it survive another 20 years?

In part two of Michael Robert´s analysis of the euro currency, he considers the impact of the global slump of 2008-9 and the ensuing euro debt crisis on prospects for the euro. For part 1 […]

Taxi drivers in Madrid and Barcelona temporarily terminated their strike Wednesday night. The decision was made following an emergency meeting between national and regional authorities concerning Über and Cabify, which the taxi sectors views as […]