The European Defence Fund (EDF) and its precursor programmes explicitly aim to strengthening the ‘global competitiveness’ of the technological industrial base of European defence. There is a major disconnect between such technologies and their potential impact beyond the profits they will generate. They will inevitably boost European arms exports and fuel the global arms race, which will in turn lead to more armed conflicts and wars, greater destruction, significant loss of life, and increased forced displacement.

The Transnational Institute (TNI) is an international research and advocacy institute committed to building a just, democratic and sustainable world

The European Network Against Arms Trade involves groups & citizens who see the arms trade as a threat to peace, security and development 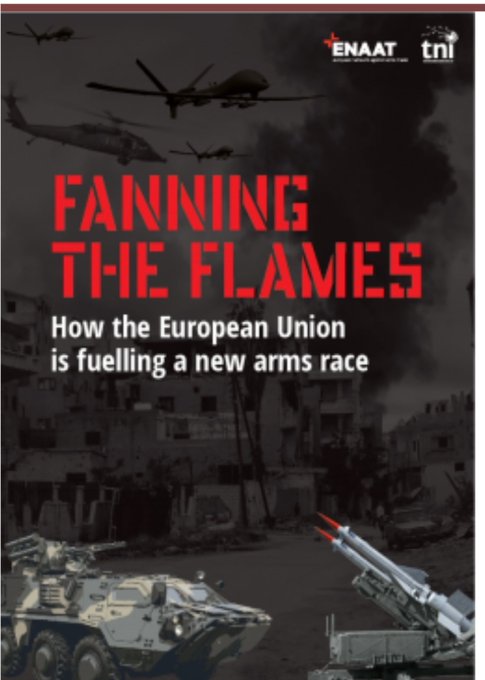 At the time of writing in March 2022, a war has broken out in eastern Europe following the illegal invasion of Ukraine by Russian troops. Towards the end of 2021 unrest in the Balkans came close to boiling point. Tensions in the South China Sea continue to simmer and threaten regional and global stability. Wars and violence continue in Afghanistan, in Central Africa, Iraq, several countries across the Sahel, Syria, and Yemen among other countries and regions experiencing constant violence and consequent displacement. Some of the world’s most powerful nations are sabre-rattling, drafting and deploying troops, stockpiling military materiel, and actively preparing for war – including the European Union (EU) and some of its member states. Contrary to the EU’s founding principle of promoting peace, it too has been charting a course to establish itself as a global military power. History has shown, however, that far from contributing to stability and peace, militarism fuels tension, instability, destruction and devastation.

In a ‘watershed moment’, in response to the war in Ukraine, the EU announced that it would, for the first time,  fund and supply lethal weapons to a country under attack through the European Peace Facility (EPF). While this move is unprecedented, it is not unexpected. The EU has been pursuing a military path since the entry in to force of the Lisbon Treaty in 2009, which provides the legal underpinning to create a common security and defence policy. Less than a decade later, in a new point of departure, the EU created specific budget lines to allocate funding to military-related projects. This decision firmly set the EU on a new and deeply worrying trajectory, where international political and social problems were to be addressed not only through dialogue and diplomacy, but also through the threat of military solutions.

The European Defence Fund (EDF 2021–2027) has a budget of €8 billion for the research and development (R&D) of military materiel. Since it is too early to analyse the impact of the EDF, which is still being developed, this report looks at its two precursor programmes: the Preparatory Action for Defence Research (PADR 2017–2019) with a budget of €90 million to fund defence research, and the European Defence Industrial Development Programme (EDIDP 2019–2020) with a budget of €500 million to fund the development of defence equipment and technology. Under these budget lines, almost €600 million of European public money was granted to highly lucrative private companies producing and exporting arms and military technologies, as well as private research centres among other beneficiaries. These pilot projects expose deeply worrying trends with regard to European-driven militarism, which if replicated under the EDF, with a total budget that is 13.6 times that of the precursor programmes, could potentially lead to catastrophic results. By increasing the funding for military R&D by a massive 1250% from one budgetary cycle to another, the EU is now increasingly intent on investing in military hardware and advanced technologies rather than in building or maintaining peace.

The objective of these budget lines is to research and develop new weaponry, as well as to enhance existing armaments, integrating new technology such as artificial intelligence (AI), unmanned or autonomous systems. In particular, the funds promote the development of ‘disruptive technologies’, which would, were they to be deployed, radically change the conduct of war. After the evolution of gunpowder and nuclear weapons, conflict analysts refer to the current period as a third evolution in the arms race, in which automated weaponry is being tried and tested and may eventually be part of conventional arsenals, despite serious unresolved legal and ethical questions. In allocating billions of euros for the development of new defence technology, the EU is fuelling a third and deeply troubling arms race, which may eventually render obsolete the existing rules of war and International Humanitarian Law (IHL).

Both the EU funding calls and the arms-producing companies use the same language of collaborative defence, interoperability, industrial competitiveness, enterprise, and innovation, with no regard for the instability, death and destruction that will certainly result if such weapons and military technology are deployed. But wars never occur in a vacuum, but are the manufactured outcome of many years of political strategies and decisions. In choosing to invest in innovative weaponry, the EU is not merely implementing a defensive strategy in the unlikely event that one of its member states might be attacked, it is driving militarism, actively fuelling a very dangerous arms race, and fanning the flames of war.

This report reveals that:

EU decision-making processes and budgets have been captured by highly lucrative corporations that exploit these political spaces for their own gain, exposing the pervasive influence of arms-trade lobbyists in setting the EU’s agenda.

Nine of the 16 representatives in the Group of Personalities on Defence Research, which was set up by the European Commission (EC) in 2015, were affiliated with arms companies, arms research institutes and an arms industry lobby organisation. The six arms companies are Airbus, BAE Systems, Indra, Leonardo, MBDA, and Saab, two arms research institutes, Fraunhofer and TNO, and the arms industry lobby organisation, AeroSpace and Defence Industries Association of Europe.

The EU is funding arms companies that are involved in highly questionable practices that fall far short of upholding human rights standards and the rule of law, two of the EU’s core values. That the EU would knowingly invest European public money in entities that are involved in dubious and highly controversial arms deals, producers of nuclear weapons, or have faced allegations of corruption, raises serious questions regarding the standards the EU applies before granting hundreds of millions in military spending.

Concretely, the seven largest beneficiaries of this EU budget line are involved in highly controversial arms exports to countries experiencing armed conflict or where authoritarian regimes are in place and human rights violations are commonplace.

Although not all of the information regarding funds granted under PADR and EDIDP is yet available, the EU currently finances 62 military research and innovation projects with a total of €576.5 million (the total is closer to €600 million including administrative and internal costs).

The checks applied to approve the funding of novel lethal weaponry fall far short of even the most basic legal and ethical standards such that the equipment, if eventually deployed, may threaten to permanently shift the conduct of war.

The EDF and its precursor programmes explicitly aim to strengthening the ‘global competitiveness’ of the technological industrial base of European defence. There is a major disconnect between such technologies and their potential impact beyond the profits they will generate. They will inevitably boost European arms exports and fuel the global arms race, which will in turn lead to more armed conflicts and wars, greater destruction, significant loss of life, and increased forced displacement. As we emerge from a global pandemic, the need to reimagine what we mean by security and ask what makes people feel safe has never been more evident. Is it investment in armament, defence infrastructure and the military? Or is it through guaranteeing access to a functioning public health system, education and improving access to social services, responding to climate breakdown, and other global challenges? In allocating billions of euros to defence projects, the EU has made a political choice to prioritise already highly lucrative arms companies rather than citizens’ well-being. In doing so it is fuelling rather than stemming instability and the likelihood of conflict.

Download:
Fanning the Flames – How the European Union is fuelling a new arms race(pdf, 3.37 MB)

Craig Murray – The Power of Lies