A study commissioned by the German NGO Urgewald exposes the climate-damaging activities of the world’s most powerful development institution. 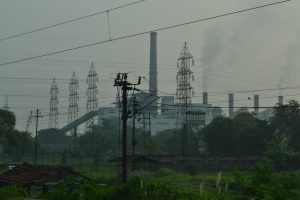 Urgewald’s research shows that the World Bank Group’s active energy project finance is three times greater for fossil fuels than for climate-friendly renewable energy sources – $21 billion for coal, oil and gas and only $7 billion for sectors like solar energy or wind power. In the past five years alone, the Bank spent $12 billion for projects associated with fossil fuels.

The author of the study is Heike Mainhardt, a long-standing US expert on multilateral financial projects and expert contributor to the Intergovernmental Panel on Climate Change. Mainhardt analysed more than 675 World Bank Group energy sector projects. It is thus the most comprehensive analysis to date of the World Bank’s fossil fuel businesses.

Shortly after the UN Climate Agreement was reached in Paris, the former World Bank President Jim Yong Kim said the Bank would ‚do its utmost’ to achieve the global warming goals set by the world community.

“It is a big disappointment to find that the World Bank Group continues to provide such vast amounts of public finance for fossil fuels. The Bank thereby completely undermines its own efforts for renewable energy sources as well as the Paris Climate Goals,” Mainhardt said. She calls on the Bank to drastically reduce its public finance for fossil fuels and to help its clients more rapidly build up energy systems based on clean renewable energy sources. “The new World Bank President David Malpass must lead this effort.”

Mainhardt researched exclusively in the public databases of the World Bank Group‘s websites. Her analysis included energy project loans to recipient countries and companies, as well as bigger policy-based programmes, advisory services and other financial assistance to governments in developing countries.

In recent years, the World Bank was much praised for several climate announcements. In 2013, the Bank promised that, with a few exceptions, it would no longer grant financial aid to coal-fired power plant projects.

While the study shows that the Bank has not directly supported the construction of new coal-fired power plants since 2013, it demonstrates that the Bank still provides support in other ways. In March 2016, the Multilateral Investment Guarantee Agency (MIGA), a member of the World Bank Group, approved a financial guarantee of $783 million for loans from the German Deutsche Bank and the Japanese Mizuho Bank. These were intended for the South African energy group Eskom to support a “capacity expansion program”. Among other things, this money will be used to finance transmission lines that will primarily transport electricity from Eskom’s new coal-fired power plants.

“In such cases, the Bank is getting around its no coal-power plants pledge. It still promotes the associated infrastructure that is necessary for the deployment of massive coal power plants,” criticized Mainhardt.

At the end of 2017, the World Bank announced that it will no longer finance oil and gas exploration and production after 2019. If this pledge is properly implemented, it would represent a significant reduction in fossil fuel support. However, the research reveals that the Bank currently holds equity shares in at least 12 oil and gas exploration and production projects worth at least $512 million. “To make good on its pledge, we expect the World Bank to quickly divest from these equity investments,” Mainhardt adds.

The study shows that since 2014 the Bank has supported operations in at least ten countries that subsidize oil, gas, or coal investments, e.g. through lower taxes and other incentives. In addition,,once gas and oil wells have been found and drilled, the World Bank can, while respecting its announcement in 2017, continue to supply these climate-damaging sectors with money – for example money for refineries or pipelines. It already provides finance for some of the world’s largest oil and gas projects, including the TANAP gas pipeline in Turkey, which has been criticized by environmental and human rights groups. For this project alone, the World Bank has provided $800 million in loans and a $1.1 billion guarantee. At the 2018 Climate Summit, the World Bank promised to double its climate protection aid. This announcement was well-regarded, since developing countries in particular need capital to protect themselves from climate change impacts and to restructure their energy systems.

Projects such as that in Ghana show how the Bank pushes countries in the opposite direction.It promoted the development of the Sankofa offshore gas field with credit guarantees and loans amounting to $935 million, also enabling the development of associated oil fields.

Ute Koczy, World Bank campaigner at Urgewald, points out: “The recent hurricane in Southeast Africa makes it utterly clear that the climate crisis is above all a crisis for the poorest. The World Bank must immediately get out of coal, oil and gas if it is not to damage its noble goal of fighting poverty.” Koczy demands: “It should advocate an upstream carbon tax for fossil exploration and extraction that effectively reduces the use of fossil fuels. The promotion of decentralised, renewable energy systems must be at the heart of its energy strategy.”

Koczy calls on the World Bank member states: “At the Spring Meeting, influencial shareholders like Germany must demand a change of course from the World Bank. So far, the World Bank’s management has failed to consistently act for the climate.”

The study can be downloaded here

Some interesting thoughts on the rapidly developing confrontation between the USA and China. Dean Baker is a Senior Economist at the Center for Economic and Policy Research (CEPR) Cross-posted from the CEPR Blog  MC2 Nardel […]

Carbon capture and storage, trapping carbon before it enters the atmosphere, is crucial in all the mainstream plans for countering climate change. Just one problem: it does not work. Paul Brown, a founding editor of […]