We need a new vision for global economic governance that is guided by the principle of subsidiarity.

Laura Basu is a Marie Curie Research Fellow at Cardiff School of Journalism, Media and Culture. 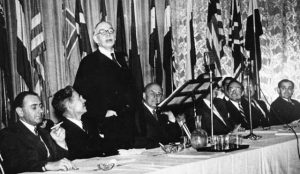 The upsurge of progressive economic proposals over the past few years in the face of austerity, stagnating living standards and rising inequality is inspiring. However, these tend to be nationally focused, while visions for a fair and sustainable new global economy are less abundant. Criticism of globalisation is now most vocal from the far right, and progressives seemed to have joined hands with market liberals to defend globalisation.

But back in the 1990s and 2000s, the global justice movement showed us that the neoliberal form of globalisation propagated by the Washington Consensus and applied by the World Bank, International Monetary Fund (IMF) and World Trade Organisation (WTO) benefited rich countries and transnational corporations at the expense of ordinary people everywhere, and especially in the Global South. The 2008 financial crisis that brought the biggest economies tumbling down diverted attention away from global justice. The Washington Consensus, which demanded that poor countries open up their markets, privatise public services and cut public spending, is now dead, but to use the well-worn zombie metaphor, won’t stay in its grave, and keeps staggering around with its rotting flesh hanging off its bones.

However, now a well-spring of new energy is being poured into trying to figure out what better economic and political systems should look like, this is the time to re-engage with ideas of global justice and envision how local and national economies could be embedded in a new global economic framework.

One recent attempt at rethinking global economic governance comes from former Greek finance minister Yanis Varoufakis and his colleagues. They suggest reviving alternative proposals put forward by John Maynard Keynes at the 1944 Bretton Woods conference, when new rules for international trade were established in the wake of the Second World War. In particular, they propose an updated version of Keynes’ idea of a global central bank, the International Clearing Union or ICU, and an international currency which Keynes called the Bancor (Varoufakis’ suggestion is the ‘Kosmos’). The point of this system was to keep the global economy in balance. Keynes recognised that it was not only debtor countries that were dangerous for stability, but that creditor countries were at least equally responsible. His design of the ICU and the Bancor meant that both deficits and surpluses would essentially be taxed. The money raised would be channelled into a global sovereign wealth fund that could be used to invest in things that were of use to the global community. Varoufakis recommends using such a fund to invest in a global green new deal.

This is not the first time Keynes’ alternative Bretton Woods has been revisited. Back in 2007, for example, political scientist Susan George discussed the plan specifically from a global justice perspective. She looked not only at the financing of trade through the ICU and the Bancor, but also at Keynes’ original plans for an International Trade Organisation (ITO), which the clearing union was to support. Unlike the WTO, which evolved in its place, the ITO charter recognised the UN, including the Universal Declaration of Human Rights. It emphasised full-employment, social and economic progress and labour standards, and mandated co-operation with the International Labour Organisation. It formulated plans for sharing skills and technology. It permitted poorer countries to use government aid and intervention for development and to protect their infant industries. On the flip side, the ITO outlawed subsidising products on foreign markets at ultra low prices – meaning the billions that rich countries hand out in agricultural subsides to out-compete developing country farmers would not be allowed. Speculative capital flows would be penalised by the ICU, helping to prevent the economies of developing countries becoming subject to the whims of speculators.

Although acknowledging that Keynes’ plan for an ITO and ICU would need to be ‘dusted off and tinkered with’, George argues that its core could be used as a basis on which to create a new, fairer global economy. To make that a reality, she suggests that the Global South, or a region within it, could start by creating its own clearing union. Beginning with the needs and demands of people from the global south does seem like a good idea, given that Western elites have not always exactly had their interests at heart when making international arrangements.

This is what academic and politician Walden Bello’s proposal of ‘deglobalisation’ attempts to do. Whereas deglobalisation is a scary word to market liberals and now many social democrats as well, Bello sees it as an opportunity to put replace neoliberal globalisation with more localised economies that are more compatible with ecological and social justice. Coming from the standpoint of the global south, the deglobalisation paradigm advocates production primarily for local rather than export markets. Trade policy and industrial policy – including subsidies, quotas and tariffs – would be used to protect local markets from destruction by corporate-subsidized commodities and strengthen manufacturing sectors. Measures for land and income redistribution would be taken, helping to create vibrant local markets and local sources of financial investment. Crucially, this is an ecologically aware vision. Not only is investment to be directed towards ‘environmentally congenial’ technology, economic growth is de-emphasised while quality of life is brought to the fore. Social equity and environmental equilibrium are seen as going hand in hand.

Indeed, profits and markets, while present, are not at the centre of this vision. Bello cites the economic historian Karl Polayni, who argued that, instead of us all being slaves to the economy, the economy should be re-embedded in society, so that it serves the needs of communities. To this end, the ownership and control of resources would be transformed to create a mixed economy, including community cooperatives, private enterprises, and state enterprises, and excluding transnational corporations.

How would this new system be governed? For a start, the IMF and World Bank would be replaced by regional institutions built on cooperation instead of free trade and capital mobility. Democratic decision-making would extend to economic matters such as which industries to develop or phase out, rather than these choices being in the hands of technocrats or corporations. Civil society would constantly monitor the state and the private sector, a process that would be institutionalised. Importantly, economic life would be governed by the principle of subsidiarity, meaning that decisions are handed to smallest political unit capable of discharging them.

The end of the nation-state?

Of course, these visions for an alternative global economy raise infinite questions, not least the one of how to get there – given our starting point of zombified neoliberalism and the power of transnational corporations. But even if the road is, let’s say ‘rocky’, it’s important to walk it anyway. Developing ideas for proper alternatives is a key part of doing that.

While we’re at it, we might ask how far we can really go in creating an economy that serves everyone in the world, if we are doing it through the framework of the nation-state. In a global capitalist economy, won’t national governments always support the interests of their transnational corporations (even though they try to avoid paying taxes everywhere, transnational corporations are still linked to certain countries)? If so, to what extent would it be possible to prevent corporations pilfering resources and gouging wages and prices, thereby contributing to underdevelopment?

George Monbiot uses the principle of subsidiarity to begin to sketch a world without nation-states. It looks similar to other proposals for nested forms of governance. Most decisions would be made at the local level. For decisions that need to be made on a larger scale, delegates from local elected bodies would be sent to regional councils to represent the interests of their community, and so on, up to a global council for decisions affecting everyone, like climate change. Rather than competition for resources between rival territories, cooperation and maximising quality of life for all would be the aim.

This article is part of a series by openDemocracy and the Bretton Woods Project on the crisis of multilateralism. The views expressed are those of the author’s only, and are not necessarily representative of either organisation.

From SUVs to gas pipelines, sabotage is on the rise as the climate crisis deepens – but does it work? Jack McGovan is a freelance writer based in Berlin. His main interests centre on sustainability, […]