We don’t get fooled again. Once more the political class is trying to rescue corporations at the expense of the 99%. Where yesterday there was no money for social policy, today there are trillions for corporations that have created an economic and environmental dystopia.

Vassilis K. Fouskas is professor of international relations at the University of East London and the founding editor of the Journal of Balkan and Near Eastern Studies (Routledge, 6 issues a year since 1998)

Ιn periods of devastating economic crises, political time is condensed so much that policy proposals that just a few days before looked radical and extraordinary, now appear timid and inadequate. This is the case with the present crisis centred around Corona virus. In the UK, the catch-up was completely inadequate. Measures to contain the pandemic came at such a late stage that France threatened to close its border with Britain unless Boris Johnson took stronger measures to stop the virus. Indeed, on 23 March, the British PM put the country on lockdown, while under pressure from experts that food rationing should be introduced sooner rather than later due to the possible shortages caused by disruption in the global and European supply chains.  US President Trump, facing a different set of issues – forthcoming Presidential election, harsh competition with China, military debacle in the Middle East and Central Asia – has also been reluctant in dealing head-on with the pandemic.

We are making the following claim here: the virus is not the cause of the economic crisis but the trigger which is pushing a corrosive neo-liberal economic edifice to collapse, because the public health measures of “social distancing” and “working from home” deepen an economy already in recession. Consequently, the policy argument we put forth is that unless drastic socialist measures address the underlying causes of the global financial crisis of 2008, the economies of the UK and the USA are at peril. This may be a tall order for the neo-liberal outlook of the political and economic elites of the two countries, but – do you remember Thatcher? – There Is No Alternative (TINA).

One key feature of the “stabilisation” packages in the wake of the global financial crisis in the Anglo-American world was their half-baked Keynesianism (some call it “new macro-economic consensus”), ie monetary bail-outs for large enterprises in the financial and banking sector, while dropping the interest rates to near-zero and allowing a timid industrial policy. Thus, enterprises continued their profiteering activity by financialising their profits, instead of investing them into material production, the result being further drops in industrial output and a pilling up of debt. In 2019, global debt was over $260 trillion or 325% of global GDP. By comparison, in 2012 the figure was $207 trillion or 300% of global GDP.   If lower interest rates do not bring about lower debt levels relative to GDP, it means that investors benefitting from this favourable economic climate direct their profits to speculative profiteering rather than material production and job creation. Since 2008, the debt increased exponentially in every single economic sector (government, household, non-financial corporate, financial corporate). In addition, much of the debt accumulated, especially non-financial corporate debt, are not highly rated by credit-rating agencies (see chart for an example from the USA). 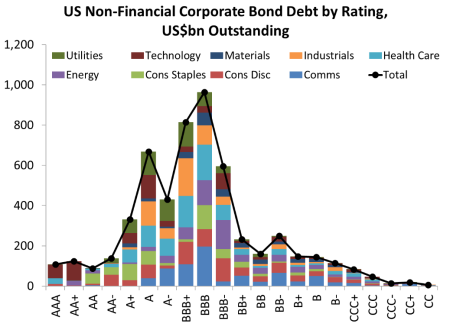 “Gig” and precarious work have since 2010 proliferated. The Resolution Foundation found out the numbers of self-employed workers grew by 22% since the 2008 financial crisis, numbering to some 5 million people. Part of this growth has been in high-skill, higher-pay sectors (e.g. advertising, banking), taking advantage of the 20% corporate tax rate. The rest has been registered in precarious sectors, such as construction and cleaning, whereas platforms such as Uber, Deliveroo and Hermes flourished. These trends register two outcomes: first, identified by the Foundation, the Treasury ends up receiving less taxable income; second, it indicates further intensification of labour in precarious labour markets and super-exploitation, having severe negative implications on individual health, well-being and healthy ageing.

The so-called “new macro-economic consensus” did not work. State sponsored capital injections in the wake of the 2008 crisis and other stimuli – such as historically low interest rates – failed to deliver job creation, general welfare and sustainable development. The recapitalisation of banks did not help SMEs to recover from the crisis. What happened was debt inflation, massive increase in income inequality and poverty, whereas corporations with excess capital bought back their own shares leading to even higher stock prices. At the same time, capital flight to US Treasury Bills continued, shoring up US bond price and the dollar as the world’s reserve currency, a trend reinforced by the Corona pandemic.

All in all, neither the American nor the British governments addressed the underlying causes of the 2008 financial crisis by adopting solid policies in favour of labour, while curtailing the power of money-capital and large financial corporations. As if the crisis never happened, the neo-liberal governments continued implementing supply-side policies. But a crisis is solved only when the structural causes of it are efficiently addressed.

New half-baked measures and the way-out

Both Britain and the USA are continuing on the same disastrous path today in dealing with the Corona pandemic. On 17 March, the British government announced an unprecedented financial handout for UK corporations, which accompanied a further slash in the interest rate, bringing it down to almost zero. Rishi Sunak, the Chancellor, announced £330 billion in loans to be made available at “attractive” rates and said he would “go further if required,” promising an “unlimited lending capacity.” This is tantamount to 15% of the country’s GDP. A further £20 billion was pledged in the form of tax breaks, cash grants and compensation to firms that have to pay statutory sick pay.  As in 2008, this money is most likely to shore up big business with minimal impact on SMEs. Reluctantly, the British government has also taken steps to nationalise the Rail operators. On 23 March, Britain’s Department for Transport announced that “it would temporarily end normal franchise agreements and transfer all revenue and cost risk to the government for at least six months”.

In the USA, the situation is equally bad. On 15 March the American Fed announced a major intervention, cutting its interest rate by 1% to near zero. This was followed my other major interventions, such as buying mortgage-backed securities and government bonds to the tune of nearly $1 trillion. The latest announcement on the Fed’s part made clear that this purchasing of assets (quantitative easing) is unlimited. Trump, on the other hand, who uses the crisis to increase his popularity as Presidential election approaches, was provisionally “blocked” by the Democrats in the Congress to pass a clearly pro-Business loans package of roughly $2 trillion. The Democrats, however, soon folded their hypocrisy and agreed to the package exhilarating the markets.

With almost one in three Americans being under “stay-at-home” orders, a forecast by economists published by The Wall Street Journal shows that some five million jobs will be lost, dropping the GDP by $1,5 trillion. The phenomenon of unemployment and under-employment (precarious work, “gig” work etc.) is global and the crisis will increase it exponentially. Estimates by the International Labour Organisation (ILO) indicate a rise in global unemployment of between 5,3 million (“low” scenario) and 24,7 million (“high” scenario).  For comparison, the 2008 global financial crisis increased unemployment by 22 million. Yet, even those calculations are but rough estimates. Further social-hygiene and public health measures are bound to deepen the recession. The lockdown announced by the British PM and the situation in the USA, leads to massive loss of socially produced and consumed value. Airlines, tourism, entertainment, football, theatres, schools, universities, gyms, retailers, shopping centres, you name it, are “holidaying”. “Every child knows a nation which ceased to work”, Marx wrote in a letter to Kugelmann in 1868, “I will not say for a year, but even for a few weeks, would perish” (Karl Marx to Ludwig Kugelmann, London, July 11, 1868).

Clearly, the British and the American governments are facing a dilemma: the more they are trying to improve public health policy taking additional “social distancing” and “working from home measures”, the more are dragging the economy into recession and a gridlock. Thus, they have but one option: to undermine the neo-liberal fundamentals upon which their policies have hitherto been based and openly adopt socialist-democratic measures serving their citizenry. We are not going to outline any such policy guidance here, because it exists. It is last year’s election Manifesto of the Labour Party. It is a good starter and There Is No Alternative (TINA) to that.

The EU´s teleological discourse leaves out the many referendums against its policies and the Euro. In his piece Lars P. Syll relates how the Swedes, despite massive pressure from its elite, voted no to the […]

Frances Coppola – Where has all the money gone?

No one can say that the crypto gang were not forwarned. Frances Coppola is the author of the Coppola Comment finance and economics blog, which is a regular feature on the Financial Times’ Alphaville blog and has […]