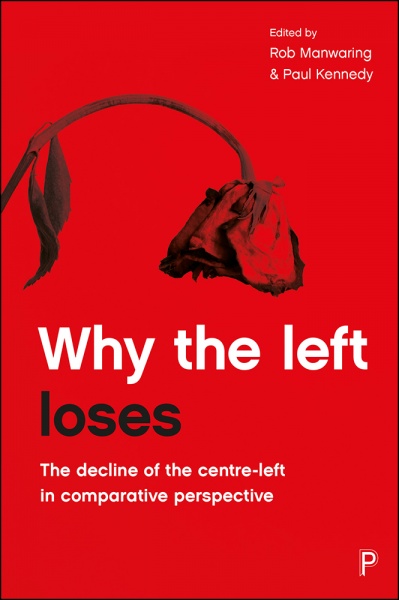 This is a rather defeatist book, as the title suggests. Through a number of slightly repetitive articles it traces the sad and unrelenting loss of popular support among the social democratic parties of Europe (and Australia and New Zealand) – a loss which offers little hope of a reversal. Between 1950 and 2015 their share of the vote at elections declined from between 30 and 40 percent to between 10 and 20 percent, according to a study by Steven Wolinetz, a professor at Memorial University of Newfoundland in Canada. Perhaps the only exception to lift the spirits has been the phenomenon of Labour leader Jeremy Corbyn in Britain, although that probably has more to do with populism than a resurgence of centre-left policies and ideas.

The centre left’s flirtation with the Third Way from the late 1990s was successful for a while. Prime Minister Tony Blair in Britain and Chancellor Gerhard Schröder in Germany appeared to have found a way to reconcile neoliberal capitalism with a modified form of social welfare. But the Third Way came unstuck soon after the financial crisis of 2008. Blair’s Labour government did indeed spend billions on social welfare, schools and hospitals; but “social mobility ground to a halt” notes Chris Pierson, professor of politics at the University of Nottingham. Likewise in Spain the ruling socialist party, PSOE, “lost credibility due to its handling of the international economic and financial crisis,” notes Paul Kennedy of Bath University.

The growth and ascendancy of the financial sector is one of the culprits. Social democracy appears to have no answer to the “financialisation” of the economy: “it doesn’t have a political economy of its own,” says Pierson. In perhaps the strongest sentence in the book, Rene Cuperus of Amsterdam University remarks:

“The post-war social democratic project of embedding a robust welfare state within capitalism is being undermined by the influence of globalisation, individualisation and the shift to the neoliberal knowledge-based economy.”

Populism is eating away the basis of both centre-left and centre-right parties. Unlike the mainstream parties the extreme right and left do not have to operate through parliament to be disruptive and to influence politics. The centre-right has partly found an answer to this: to grab the policies of the far right as far as it can and embrace them, as has happened in Austria and to some extent in Germany. The centre-left has not been so lucky: witness what happened to Pasok, the centre-left party in Greece, whose share of the vote was reduced to 5% in 2015 by Syriza, the party of the hard left. “Pasokification” is defined by Collins Dictionary as “reducing a country’s main social democratic party to the smallest party in parliament as a result of the rise of a more radical left party.”

If the centre-left has an answer to this up its sleeve the book fails to give one. But it does identify three fairly basic qualities which are missing in social democratic movements today: leadership, a new structure, and a fresh vision. Where could that possibly come from? Martin Schulz, the German Social-Democrat Party’s (SPD’s) candidate for chancellor in the recent election, was a huge disappointment after showing early promise. Francois Hollande didn’t even risk standing for a second term in last year’s French presidential election. In Britain, Jeremy Corbyn is an outlier, a popular figurehead but no leader. The extremists of left and right (mostly of the right) sing a more compelling tune these days for those who feel angry and marginalised, and even for some who do not: Alexis Tsipras in Greece, Pablo Iglesias in Spain, Heinz-Christian Stracke in Austria, Beppe Grillo in Italy, Geert Wilders in the Netherlands, Viktor Orban in Hungary, Jimmie Akesson in Sweden.

This book is a useful reminder of where we are, but it offers no way forward. It is also rather heavy on jargon. One sentence jars particularly, though some meaning could with difficulty be extracted from it: “Financialisation, largely under the stewardship of social democratic governments, has combined with the processes of marketisation and flexibilisation to drive inequality at an alarming rate”. And “ideational” is a term which this writer has managed to do without, although apparently it was first recorded in 1818.

Why the left loses: The Decline of the Centre-Left in Comparative Perspective edited by Rob Manwaring and Paul Kennedy

Limits: Why Malthus Was Wrong and Why Environmentalists Should Care by Giorgos Kallis