On 17th October 2018, Valdis Dombrovskis, Vice President of the European Commission, addressed the Oxford Union in support of the motion that “the euro has never been stronger“. Today, Friday 16th November 2018, Steve Bannon is addressing the Oxford Union also. In between, on Wednesday 14th November 2018, I had the opportunity to also address the Oxford Union with the following message: The euro’s inane architecture caused and reinforced the colossal crisis in Europe which underpinned Brexit and begat fascist movements across the continent – the ones Mr Steve Bannon is now cultivating into a Nationalist International.

In this context, Mr Dombrovskis and Mr Bannon represent the two sides of the same coin: an axis of authoritarian politics and ludicrous economic policies turning Europe into Donald Trump’s ultimate dream – a reactionary, divided Europe that serves perfectly well his designs for a reactionary, divided world. The two men, I added, share something else too: On hearing that the Oxford Union had invited me to be his opponent on 17th October, Mr Dombrovskis’ office demanded that I be dis-invited. Similarly, Mr Steve Bannon withdrew from a debate between us that was to have taken place earlier. 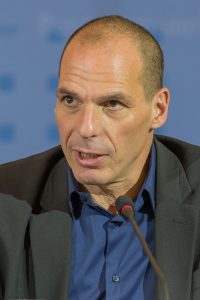 Listen here I discuss a Modern Debt Jubilee On Macro’n’Cheese today, and this is a quick explanation of how it could be done. The podcast goes to air at 8am New York time today–which is […]

Steve Keen – Economic Stagnation in Italy under the Euro

This is the recorded talk I gave to Positive Money Italy (http://monetapositiva.blogspot.com/)  on November 23rd 2018. I explain that excessive private credit caused the relative boom in Italy before the crisis, and the collapse in […]

The green new deal is painted as an unaffordable far left pipe dream. It has been politically maligned to preserve the status quo at a time when we know that establishment economists have got all […]