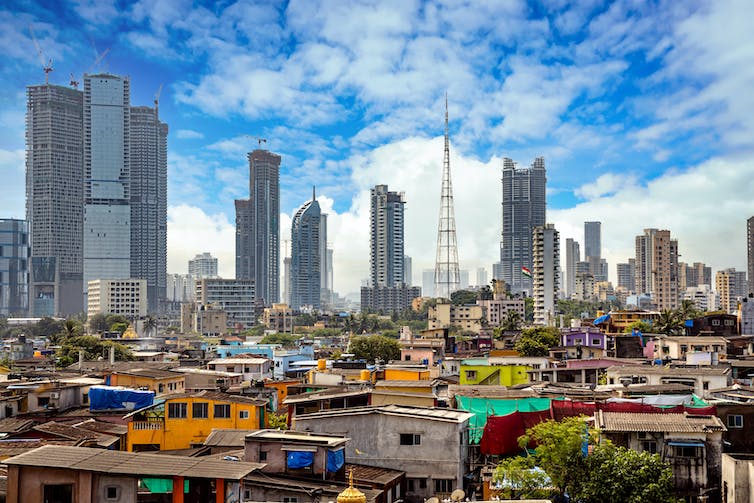 US billionaires experienced a trillion-dollar surge in their combined net worth in 2020, more than enough to hand out a $3,000 (£2,140) stimulus cheque to every American.

Meanwhile, entire sectors were put on hold, removing the basis of subsistence for many people. The World Bank estimates that by the end of 2021 the pandemic globally will have pushed up to 150 million people into extreme poverty, most of them in south Asia and sub-Saharan Africa.

Almost everyone agrees that policies tackling inequality have to be at the core of a sustainable post-pandemic recovery. However, some of the immediate benefits of inequality reductions have not received much attention from academics, let alone the public. One such benefit relates to climate change.

The sum of its parts

The amount of money people have available is a big factor in determining what they consume and how much of it, so how money is distributed in a society matters even if total income stays the same.

A typical mega-rich Brit might own a mega-yacht in Monaco and a mega-mansion in London, while for obvious reasons this is not in the realm of possibilities for an average UK household living on less than £3,000 per month. Lower and middle-income households spend most of their money on necessities and subsistence goods: food, clothes, heating, public transport and so on. The mix of income levels matters and determines what is produced and consumed – fewer mega-rich people implies fewer mega-yachts, for example.

Luxury consumption by the rich concentrates economic activity and delivers negligible extra wellbeing, yet sucks up vast amounts of resources. For instance, researchers in Australia estimated that the operation of an 80 metre long mega-yacht requires around 4,600 tonnes of CO₂ per year. That is equivalent to the yearly CO₂ emissions linked to 900 average UK citizens, without even considering the ecological impacts of building the yacht. Valuable carbon budget has been wasted that could have instead been used to keep hundreds of people warm at home, or to build public infrastructure.

More than the sum of its parts

Colleagues and I recently published an academic study which considered what would happen to energy demand if global inequality was reduced while the global economy remained the same size. In this thought experiment, we used a model of income distribution and consumer demand based on surveys to predict how demand would substantially shift across sectors. Although this shift would likely increase the world’s total demand for energy, it also bears the potential to accelerate the transition to cleaner energy and thus is crucial to climate policy.

The total amount of energy used would increase in this more egalitarian world because lower-income and middle-income households save less of their earnings, so redistribution to them would result in more overall consumption (albeit on necessities rather than luxuries).

However, our calculations estimate that this would only increase global energy demand by 7%, which is a relatively small “energy cost” to pay for completely eradicating extreme poverty and ensuring almost everyone has access to a decent amount of energy.

But that’s just the direct effects of redistribution. In the longer term, we estimate that once the relationships between the economy and energy use are taken into account, this more egalitarian world would be much easier to decarbonise.

That’s because, in a more equal society, energy demand shifts from transport and luxury to necessities and subsistence. In fact, if the world as a whole was radically more egalitarian, with lower income inequality than even Scandinavian countries, our research predicts that global energy demand in transport would fall by roughly 30%, as wealthy people would fly less, drive fewer cars and less often, and perhaps have fewer of those yachts. The flip side is an increase in residential energy use, which would rise by 21% as more people would secure adequate shelter, food, and heating or cooling.

This shift is important because luxury consumption, such as aviation and yachts, is often hard to decarbonise – the best solution is simply to reduce the demand in those sectors. In contrast, retrofitting measures for houses are often cheap and could be done today.

We looked at the global level in our research, but there is no reason why the same logic should not apply to nations. Most countries today have high income inequality and rich households almost universally consume more private transport and luxury items than low or middle-income households. Reducing inequality would be worth it, no matter if between or within countries – ultimately, solving the social crisis and the ecological crisis is no dilemma, but a win-win situation.

The economist talks to Andrés Lomeña about power relations, feminism and what an economics designed by young people would look like. Grace Blakeley  is a British economics commentator and author. Cross-posted from Open Democracy Millennials […]

Yanis Varoufakis – Why Bitcoin is not a Socialist’s Ally

On 15th July, Ben Arc published in Bitcoin Magazine an open letter addressed to me in a bid to convince me that I should re-assess my rejection of Bitcoin as a force for good; as […]