“Mario Draghi hired McKinsey to ‘organise’ Italy’s distribution of the Recovery Fund monies. What next? Get the Mafia to re-organise the Ministry of Justice?”

Originally in La Stampa in Italian 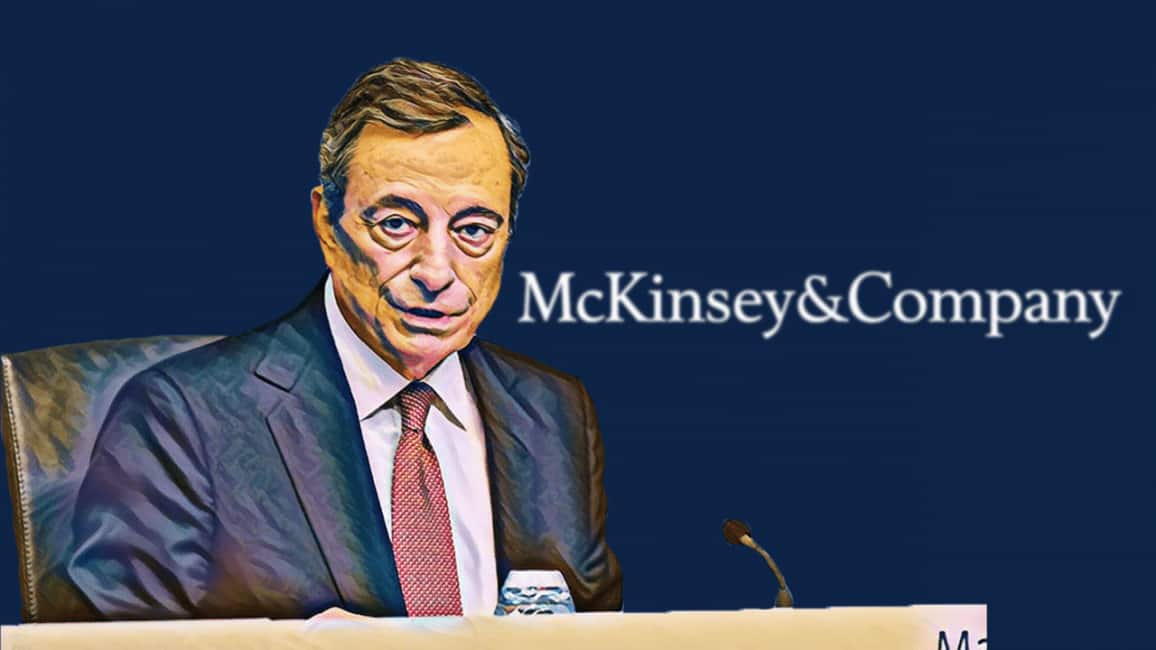 Last week, upon hearing that Mario Draghi, as Italy’s new PM, employed McKinsey to advise the government on how to spend the billions of the EU Recovery Fund, I tweeted, in anger and frustration: So predictable, so sad: Mario Draghi hired McKinsey to ‘organise’ Italy’s distribution of the Recovery Fund monies. What next? Get the Mafia to re-organise the Ministry of Justice? A furore followed within Italy’s twitter. Here I stand by my tweet in an interview with La Stampa, answering also questions on Europe’s preposterous response to the economic challenges of Covid-19 and to DiEM25’s proposals, from March 2020, on how the EU should have responded

In Italy your tweet about McKinsey has triggered a huge debate. Don’t you think it was inappropriate to compare the management-consulting firm to the mafia?

PM Draghi’s decision to engage McKinsey was scandalous and an insult to the good people of Italy. In effect, it constitutes a statement that, to distribute EU funds, Italian democracy needs advice from a consultancy firm with a track record bordering on the criminal. Thus the humourful, and perfectly apt, punchline suggesting that if Mario wanted to do a little worse he would need to engage the Mafia in re-organising the Ministry of Justice.

The Italian Ministry of Economic Affairs has explained that McKinsey’s contract is worth approximately 20.000€ and the consulting company will not “organise Italy’s distribution of Recovery Fund money”, as you wrote. “McKinsey – explained the Ministry in a note – will offer only a technical-organizational support”. Do you see that as a step forward?

I see it as a guilty attempt to wriggle out of a disgraceful cockup. What is the difference between “helping organise” from offering “technical-organisational support” of Italy’s distribution of Recovery Fund money? None! As for the fee, even if they did it pro bono, their engagement is an affront to the Italian people’s well-developed sense of decency.

McKinsey & Company is one of the most prestigious consulting management firms in the world and has advised corporations and governments around the world. Also France hired McKinsey to help in the pandemic. So, why do you think it is wrong to hire McKinsey?

They are certainly “powerful”. But prestigious? Not in the slightest. Only very recently they were fined $600 million for helping push drugs that contributed to the death of 450 thousand Americans. Tom Peters, an ex-McKinsey employee, explained in the Financial Times how the firm cynically calculated the expected fines to pharmaceutical companies from intentionally causing thousands of deaths and then advised them to go ahead! So, yes, it was more than wrong for PM Draghi to hire McKinsey. It was immoral.

In your last interview with La Stampa, almost one year ago, you affirmed that the EU Recovery Fund “will not be enough for Italy without Eurobonds”.  Now we know that Rome will receive 209 billion euros. Did you change your mind about this?

No, quite the opposite. They time has come to inform the Italian public of how hopelessly inadequate the Recovery Fund is. To begin with, $120 of these billions are loans, which is the last thing Italy needs as loans cannot ameliorate the insolvency problem at hand. Only around $80 billion will come in the form of grants, to be distributed over six years, at the rate of $13 billion every year. Compared to the increase in Italy’s debt, both private and public, this is a drop in the ocean or, put more scientifically, it is macroeconomically insignificant. In conclusion, sadly, what I said a year ago is now fully confirmed.

Politically, in Italy, “The Times They Are a-Changin”. We’ve got a new premier, Mario Draghi, and the party of Matteo Salvini have accepted to participate in the new government of national unity. Only Giorgia Meloni is in the opposition. What do you think about this unpredictable scenario?

A clear defeat for Italian democracy. By dominating the opposition, Giorgia Meloni and her neofascist party will be the only beneficiaries of the discontent that will, inevitably, grow as the overblown optimism following Mr Draghi’s appointment gives way to the harsh reality.

Why don’t you trust Mario Draghi? In the last decade it was one of the most important people for the survival of the euro and he has been accused of helping Southern European countries ECB. Have his monetary policies damaged Athens?

My opinion of Mario Draghi is irrelevant. Yes, in 2015 Mr Draghi strangled Greece’s democracy, and in the process damaged European democracy, by shutting down Greece’s banks in order to blackmail the Greek people into accepting yet another unpayable credit card from the troika under neo-colonial conditions. Mario was, in my opinion, given an ultimatum by Berlin: Crush the Greeks if you want to be allowed to buy Italian, French and Spanish bonds.

Still, if Mario had been chosen by a majority of Italians, in an election where he had presented his program to the public, as a democrat I would congratulate him. In other words, what is relevant is that, once again, Italian democracy has been replaced by a system where the Prime Minister is selected behind closed doors by political leaders striking deals that have nothing to do with the programs they put to the people.

So what should Italy and, I would say, Europe do to the deal with the economic depression caused by COVID-19?

DiEM25’s answer, presented a year ago, remains valid: First, get the ECB to issue a proper, 30year, Eurobond to the tune of at least €1 trillion and use that money, on the basis of an automated formula, to ensure that the new debt caused by the pandemic is europeanised – as opposed to burdening Italy, Spain, France, Greece or Germany. Second, the ECB should regularly credit the bank accounts of every European family directly – as both Presidents Trump and Biden have done in the US. Third, Europe should invest, centrally, in a Green Energy Union/Grid to the tune of 5% of Europe’s GDP, to be funded by European Investment Bank bonds that the ECB supports in the bond markets.

What about Europe? Will it be stronger or weaker after the pandemic?

Much, much weaker. Investment fell during 2020 by 50% and the output gap grew to 8%. The Recovery Fund will only make up for, at best, one-eighth of this over the next few years. It is too little and it will come too late to prevent another wasted decade for the Eurozone.

How are things going in Aegina and in Greece? I’ve read that until the 16th of March you will be still in lockdown. How is the economy going under the conservative government of Kyriakos Mitsotakis?

Aegina remains a gem but, alas, the Mitsotakis government, lacking anything resembling a plan, is proceeding with wishful thinking as his only compass. As for the economy, judge for yourselves: In 2010 Greece went bankrupt because our public debt rose to €300 billion, our GDP fell to €220 and the budget deficit exceeded 10% of GDP. Today, public debt exceeds €355 billion, GDP languishes at €166 billion and the budget deficit exceeds 10%.

To conclude on a more political note, has DiEM25 any relationship with the Italian Democratic Party? Do you know, or have you ever met, Enrico Letta?

DiEM25 neither has nor wishes to have a relationship with the Democratic Party, which we consider to be a major contributor to Italy’s woes and, also, a stagnant party lacking any capacity for innovative, progressive thinking. As for Enrico, yes, I know him well and I like him very much, personally. Last time we met was in Paris where he invited me to address his students at Sciences Po. Is it not wonderful that politicians, economists, artists etc. can disagree strongly and still benefit from dialogue while enjoying each other’s company?

The pioneering Danish collective agreement on platform-based domestic workers has been vitiated by a misguided ruling by its competition authority. Nicola Countouris is director of research at the European Trade Union Institute, professor of European […]

“What we’re suggesting, in essence, is that all mainstream parties should commit to something along the lines of ‘no new, large-scale, permanent immigration’. The word ‘new’ makes it clear that curbing future levels of immigration […]