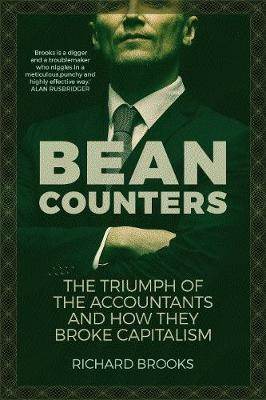 As Private Eye journalist, Richard Brooks has long been responsible for exposing corporate corruption, especially around tax avoidance and evasion. One story kept on repeating in his research – the role of the Big 4 global accounting firms – KPMG, PWC, Deloitte and EY – in not just helping corporations avoid tax, but even inventing and supplying bold tax avoidance schemes which would deprive countries of billions of dollars in taxes. He wrote the outstanding ‘Great Tax Robbery’ to reveal all, and has now followed this with his latest ‘Beancounters’, with equally insightful research, and a devastating expose of the people, practices and services of the Big 4 in creating global economic havoc and inequality. In spite of this, they remain untouchable.

Readers of this blog will not be strangers to the story, which is beyond fiction, and a cause of economic hurricanes all over the world. The Big 4 are a cartel that have brought the world to its knees economically, affecting our jobs, pensions, savings, and even bringing booms and recessions, making us homeless and deprived in the process. In spite of this, they continue to be top advisers to governments, helping shape their tax policies, running whole offshore islands and their regulatory policies, ensuring that while ordinary people pay taxes and stay above the law, corporations are allowed to cherry pick and avoid. Professional bodies and regulators have become totally captured by their power and reach.

The book is 280 pages long, and covers the history of accounting, including the origins of the Big 4 and their ethical and professional roots, to the growth and expansion in less than a hundred years to the global multi-billion dollar businesses they have become today. There are twelve chapters which cover a wide range of global scandals, and the profound contradictions of being auditors and advisers at the same time. The book reminds us that modern accountants set their own rules, enforce their own standards, influence laws and governments, and rarely go to jail. Whilst once their conscience regulated their actions, today its all about fees and rewards, and conscience has disappeared altogether. The facts that have been uncovered and collated are truly devastating and include

The book does not hide from pulling any punches or naming names, and is based on meticulous research and very well referenced to audit, tax and regulatory scandals all over the world. Even then, Brooks was unable to cover all of them due to the sheer scale of the abuses – he would need to write thousands of pages to be able to even remotely be comprehensive about the global damages wrought by the Big 4.

Brooks did give the Big 4 Heads a chance to respond and defend – two of them, Deloitte and EY declined, but KPMG and PWC did meet, though the answers they gave were lukewarm at best, and admitted very little guilt, even in the case of PWC actions in Luxembourg. What seemed very clear is that there is no one culture or ethic dominating the Big 4 apart from fees, revenues and profits, and reputation risks and fines are seen as business risks rather than critiques of culture, character and leadership. The huge size and influence of the Big 4, in both the public and private sectors, give them significant leverage which they continue to use with little social or civic responsibility. As Brooks research shows, they have often led the global regulatory race to the bottom, with the result that the undemocratic and powerful multi-national corporation continues to wreak havoc against nation states all over the world. With the help of the Big 4.

Professor Atul Shah is author of ‘Reinventing Accounting and Finance Education’ and ‘The Politics of Risk, Audit and Regulation – A Case Study of HBOS’ both published by Routledge.

Richard Brooks’ book is available here, amongst other places, of course.

‘Beancounters – The Triumph of the Accountants and How they broke Capitalism’ by Richard Brooks, 342pp, Atlantic Books, £18.99

Flawed Capitalism: The Anglo-American Condition and its Resolution by David Coates

Book review by Scott Lavery Global orders rise and global orders fall. That much we know. The difficult questions arise when we examine those moments of transition between phases of capitalist development. The post-crash world […]

The Politics of Financial Risk, Audit and Regulation: A Case Study of HBOS by Atul K. Shah

A book review by Prabhu Sivabalan In The Politics of Financial Risk, Audit and Regulation: A Case Study of HBOS, Atul K. Shah examines the HBOS collapse of 2008, and uses it as a platform to […]