The belief that Adam Smith was an unqualified supporter of the free market, anti-labor and pro-capitalist, or was always in favor of small government is just so much at odds with his writings that one is bewildered as to how such a caricature ever took hold. 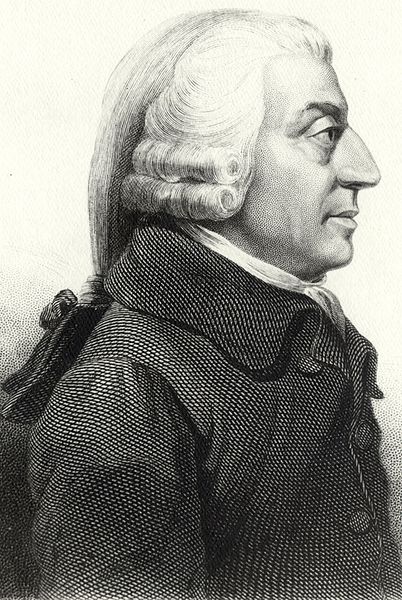 The recent book by Jesse Norman simply entitled “Adam Smith” is a pleasure to read. There are of course innumerable books on the founder of the political economy, so why another one? Norman’s book is directed toward that, at times elusive, general educated reader, and has, in my opinion, three objectives: (i) to situate Adam Smith in his time, both intellectually and politically, (ii) to argue that there is a remarkable consistency between the Adam Smith of the Theory of Moral Sentiments, Lectures on Jurisprudence and the Wealth of Nations, and (iii) to show that most of neoclassical and laissez-faire appropriations of Adam Smith are at best one-sided, and in many cases downright wrong.

Point (i) is nicely discussed in the first part of the book (“Life”). We follow Smith, his education, early jobs and successes, friendships, intellectual influences, and his later fame all the way to his death. I think that placing Adam Smith in the tumultuous history of 18th century Scotland and England was a right decision. Political conflicts and wars between the Jacobites and the Crown, religious strife, the Union of 1707, US war of independence as well as the remarkable economic progress of Scotland that Smith witnessed first hand, must have all contributed to, or even formed, his view of the world. I wish Norman would have spent a bit more time in explaining for the readers not sufficiently familiar with Scottish and English history of the period what were the differences and interests of the various factions. I was unable to fully follow them and consequently to more exactly gauge Smith’s political position.

Smith as a person remains rather vague. Of course, his erudition and even temper are agreed by all who knew him. But Smith the man is still obscure. Most of contemporaries’ laudations cited by Norman (and other writers on Smith; many of these praises are used and reused) are a bit too generic for the reader to feel what really were Smith’s virtues. The standard British approach at the time seems also to have been partial to flowery expressions of admiration which were often pro forma.

Smith does not seem to have helped too many people whom he knew—other than in his job as a paid tutor; his generosity is undefined—even if he did not die a rich man (and clearly must have given some of the not inconsiderable wealth he earned). Moreover, the fact that on two occasions he failed to stand up for David Hume, his close friend and an early inspiration, is not exactly awe-inspiring. Norman mentions Smith’s uncharitable treatment of James Steuart in the WoN, and I would add not very generous treatment of Quesnay. (Surely in his economics Smith went far beyond the Physiocrats and could rightly be critical of them but he might have been somewhat less stinting in his praise of Quesnay—perhaps too because of personal relations that he entertained with him and from which he probably benefitted intellectually). Smith was, as Marx noted, rather economical in his citation of the predecessors or sources for his views.

Norman is convincing in his task (iii). The cardboard Smith which is made the originator of the general equilibrium is really not the Smith of flesh and blood. I think that Smith’s own reaction to Walras and Arrow-Debreu would have been that it is a nice result—which can be safely tucked in an annex and mostly forgotten.

I thus sometimes wonder if people who claim Smith as their inspiration have ever bothered to read him—beyond a few quotes and select excerpts. And whether they realize that some of his most celebrated statements and metaphors (e.g. the invisible hand, capital’s preference for domestic market, coordination advantage of smaller groups, relative poverty [“whatever the custom of the country renders it indecent for creditable people…to be without”]) are not central concepts around which his writing is organized but are merely mentioned in passing and when dealing with specific topics. Perhaps nothing illustrates better Smith’s empirical bent and inductive approach.

The belief that Adam Smith was an unqualified supporter of the free market, anti-labor and pro-capitalist, or was always in favor of small government is just so much at odds with his writings that one is bewildered as to how such a caricature ever took hold. Recently, however, not least thanks to Amartya Sen’s writings, the “real” Smith is much better known. Norman is here adding, I hope, the proverbial last nail into the coffin of neoliberal caricature of Smith.

Where I see things differently than Norman is in (ii), the so-called Adam Smith Frage. Norman is right to dismiss the extreme version of this argument, namely that there were two Adam Smiths, the young and idealistic one of the Theory, and the old and chastened one of the WoN: “The real Smith was not an intellectual turncoat who switched from altruism in The Theory of Moral Sentiments to egoism in The Wealth of Nations” (p. 324). Norman’s main argument against that view is chronological. Smith worked on the expanded version of the Theory after completing WoN (and vice versa) while Lectures of Jurisprudence, written in-between the two more famous works, provide an unmistakable bridge. Therefore, Norman argues, empathy, impartial spectator, fatuity of wealth accumulation from the Theory, and self-interest and invisible hand from the WoN are all part of the same worldview and we are wrong to see the WoN as having been built, as George Stigler claimed “on the granite of self-interest”. Norman works hard to convince us that everything, from empathy to self-love, needs to be taken jointly.

I think he overplays his hand. I do not think that Smith was inconsistent, an “intellectual turncoat” or that there is a contradiction between the Theory and the WoN. I think simply that, in the two books, he dealt with two different aspects of reality. In one he approached the world as a moral philosopher; in the other, he approached the world as an economist. This is not inconsistent—it just reflects our normal separation of topics, or differently, a multi-faceted world. There was no point in a book on political economy, which is concerned, to quote Marshall, with “the ordinary business of life”, in talking about religion, vanity of all things material or our sympathy for others. It would have made the book odd and would not have been  useful. What did, after all, East India Company have to do with any of these ideas? (I wrote about the almost universal “badness”, “the rule of evil men” that is so pervasive in the WoN here.)

For our understanding of how an economy works the tools from the Theory are superfluous. Indeed, for the WoN to stand firm and tall, self-interest is enough. */ Smith displayed there I think a praiseworthy economy of assumptions.

I have to stop here for a moment to explain both why I believe that Adam Smith in the WoN used no tools from the Theory, and why it has become de rigueur to argue that we should use a much “broader” Smith than purely the Smith of economics. The reason for the latter is the appropriation of the “narrow” Smith first by neoclassical economics and then by neoliberals. A way to “fight” against this is thought to reside in showing that Smith had a much more encompassing view of economics, embedded in society, in “reciprocity, cooperation and sympathy”. To show that—it is thought—we must combine the WoN and the Theory and prove there is only one Smith.

But where I think this approach is wrong is that it meekly surrenders the Smith of the WoN to neoliberals and tries to change the discourse. I think on the contrary that the Smith of the WoN is indeed the Smith of self-interest as the motivating force alone (so I agree with neoliberals there) but that he is not an economist of the laissez-faire. Why? Because in example after example he shows that self-interest of some (large industrialists, monopolists, government officials, protected traders) is deeply pernicious for the society and has to be kept in check. He does not deny that self-interest motivates people in economics but he is not blind (as neoliberals are) to the fact that self-interest can produce at times disastrous results. The solution then is to direct self-interest in a way that it becomes socially productive rather than destructive and one does this by stimulating competition, being tough on tacit “restraint in trade” by large companies, breaking the monopoly of traders and of the East India Company, having the government provide goods and services others will not. All these  “progressive“ measures are justified by societal gain, not by a recourse to sympathy among the economic actors or any other tools from the Theory.

To conclude: the Smith of the WoN is, in my reading, indeed the one who believes that when we talk economics we talk self-interest almost exclusively, but this does not imply –actually most of the time positively rules out—policies of non-intervention. Smith on this reading is what may be called a “center-left economist”. We do not need to “promote” him to the position of a sage or social philosopher in order to interpret him as “progressive”.

*/ Self-interest does not, of course, exclude cooperation. We cooperate because most of the time we cannot reach our objectives alone. Division of labor, to take Smith’s most famous example, is not based on our sympathy for others but on self-interest that can be best realized while cooperating with others. Also, while self-interest is enough for economics it is not enough for a much broader “science of man” a project into which Hume and Smith, as Norman explains, were engaged.

In the EU and Britain there have been egregious errors and incompetence in the handling of the COVID epidemic costing hundreds of thousands of lives. The worse the situation grows, the more lies that are […]

It is no wonder that mainstream media bombards us with how important, valuable, and noble capitalists are – because they aren’t. Richard D. Wolff is professor of economics emeritus at the University of Massachusetts, Amherst, […]

The recent university scandal in the USA is just another example of how the rich can secure their children success, although there may be little talent behind this. Read here