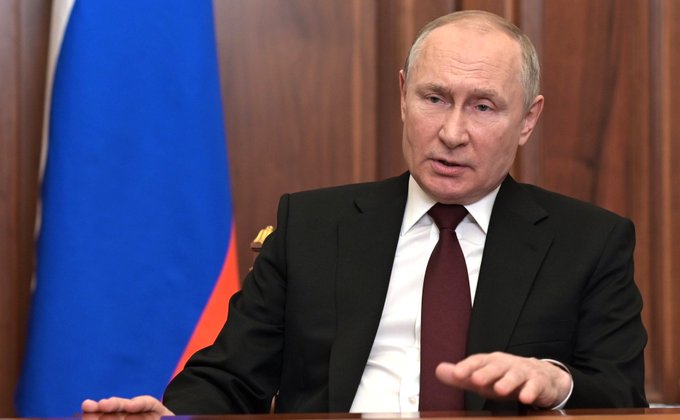 Vladimir Putin’s speech on 21 February 2022 at the occasion of the recognition of Donbas and Lugansk republics is one of the most extraordinary political speeches of the present time. It consists of more than 6,000 words, and it was delivered over 55 minutes without the help of a single piece of paper or without a single hesitation. To the extent that one can judge there was no teleprompter either.

It is a speech that lays bare, and intends to do so, Putin’s own philosophy of history. It covers the past one hundred years of Russia’s history. It gives one, not unreasonable, but very narrow version of that history, where historical events with multiple causes and multiple meanings are simplified to a single cause and single meaning.

It is a form of “J’accuse” speech that tells, according to Putin, a story of a century of betrayals of Russia: by Communists, by Russia’s own elites, and by Russia’s pretended friends. It is thus best to divide the text into three parts, the three betrayals.

The speech takes the reader over exactly the past century, from 1922 when the Union of Soviet Socialist Republics was formed. (The only two episodes, prior to that period, are a very brief mention of the 17th century Russia, and the Brest-Litovsk peace agreement of 1918. The latter was also seen as a Bolshevik betrayal.)

The Soviet Union, as created in 1922, involved the formation of ethnically-based republics and granted to each republic the right of self-determination, up to, and including, the right to secession. Putin says: “Leninist, substantially confederal, state structure and the slogan about each nation’s right to self-determination up and including secession were built in the foundation of the Soviet state: at first, in 1922 they were included in the Declaration on the Creation of the Union of Soviet Social Republics, and then after Lenin’s death in 1924, in the USSR Constitution.”

This was the land-mine, as Putin will later claim, that was installed in the very act of the USSR creation and that will later explode, destroying the union, and thus directly leading to the problems faced today. Why, Putin asks, “was it necessary to satisfy the endlessly increasing nationalist ambitions of different parts of the former [Russian] empire? Why giving them newly-formed, often arbitrarily created, huge administrative units –union republics—that often had nothing to do with them [titulary nations]? To repeat, giving them the territories together with the populations of the historic Russia.”

Even if Putin does not use the term, it was clearly a move that can be explained only by the anti-Russian sentiment of the Bolsheviks: a betrayal. Putin does not stop to think about the fact that the Russian revolution was the revolution of social and national emancipation, that it included the components of both equality between citizens and equality between peoples who were oppressed in the Czarist Russia. This is the reason why Bolsheviks had in their ranks so many representatives of various ethnicities, and why they –and Lenin in particular—insisted on the need to fight Great Russian chauvinism.

They created republics so that the nations of the former Empire might feel to have a real stake in the new socialist commonwealth, and originally they even thought that the entire world, as it became Communist, would be unified in a single Soviet Socialist republic (hence, no geographical terms in the name of the USSR). This idea of a single world-wide socialist republic where contradictions between different ethnicities are overcome explains the annexation of the Baltic republics in 1940 (as opposed to keeping them as allied states, as happened after 1945 in Eastern Europe) as well as both Yugoslav and, more importantly, Chinese Communists, after their successful revolutions, suggesting to unify their countries with the Soviet Union.

“Again I ask myself: why was it necessary to make such generous gifts, which the most ardent nationalists had never even dreamed of before, and even give the republics the right to secede from the united state without any conditions?” The answer is simple: it was not some special anti-Russian feeling that motivated the creation of the Soviet republics. It was due to the origin of the revolt against the Czardom and the vision of a new world of national equality.

Such broad accusations against the Bolsheviks, of having arbitrarily surrendered vast Russian territories, implicitly question the legitimacy of all republics, not only of Ukraine. In the speech of course, Ukraine is singled out by showing that it was cobbled together first by Lenin, then by Stalin who gave it some Polish, Rumanian and Hungarian territories at the end of the World War II, and finally by Khrushchev who “for whatever reason” gave Crimea.

What happened next? “…[T]he Red Terror and the rapid transition to the Stalinist dictatorship, the dominance of the Communist ideology and the Communist Party’s monopoly on power, nationalization and the system of the planned national economy – all this in fact turned [the right to secession] into a simple declaration, into a formality, the declared, but non the working principle of the state system” The right of the republics to self-determination and secession was just a dead letter so long as the Soviet Communist Party was strong and centralized. The initial 1922 damage did not manifest itself.

That, however, began to change in the 1980s with the deep crisis of the Soviet economy and society. The crisis stimulated growing “appetites of local elites. Each of these elites…in order to expand the base of support, began to mindlessly stimulate, encourage nationalist sentiments, play on them, promising their potential supporters whatever they wished”. Since the legitimacy of the Soviet rule collapsed, the new legitimacy was to be found in ethnic nationalism, and the right to secession was the perfect tool to realize such objectives. Here Putin is indeed on very strong grounds. This was the process that broke up not only the USSR, but also Yugoslavia and Czechoslovakia and created 23 or, if we include all the additional republics, 28 new states. It was the process foreshadowed by Hélène Carrère d’Encause in her “L’empire éclaté” and by   Wisla Suraska “How the Soviet Union Disappeared?” (reviewed here). But it is hard to see how the process was specifically anti-Russian. All elites, including Yeltsin’s which brought Putin to power, played the same game, dressing themselves up in nationalist garb.

Thus, in 1989, the CPSU Plenum adopted, Putin quotes, such statements as: “To the Union Republics belong all the rights, reflecting their status of sovereign socialist states” and “The highest representative authorities of the union republics may protest and suspend the operation of resolutions and orders of the union government on their territory.” The break-up of the USSR was then only a matter of time. That break-up and the creation of newly independent states was not accomplished by nationalist leaders, Putin says, who now, especially in Ukraine, claim this but “[t]he break up of our country was brought by the historical and strategic mistakes of Bolshevik leaders, and the leadership of the Communist Party of the USSR.”

That was the second betrayal.

Betrayal by the USA

Russia, says Putin, accepted such uneven and unfair outcome and behaved toward the new republics in the spirit of friendship. Putin here lists, with respect to Ukraine, a number of “good deeds” done by Russia including massive subsidies between 1991 and 2013, estimated at $250 billion, payment of all Ukrainian debts (accrued under the Soviet Union), etc. This took place despite Ukraine’s constant attempts to cheat Russia (“banal stealing of gas”) and not to respect the undertaken commitments (to return some of Soviet assets that were allocated to Russia).

Russia also wanted to establish cordial relations of friendship with the United States. In 2000, Putin, in a detail that he says he publicly mentions only now, asked Bill Clinton how would US react if Russia asked to join NATO. He was, Putin says, taken aback by Clinton’s very reserved reaction. The more time passed, the more evident it became to Putin that the United States treated Russia as an enemy: the official US military plans say so. In these plans Ukraine is the spring-board for US ability to military threaten Russia. Americans have renovated a number of Ukrainian airports, and with new weapons, including tactical nuclear arms, the entire Russian territory up to the Urals, and apparently in the near future, even beyond the Urals is an easy target for American weaponry. Such systems can deliver Tomahawk rockets against Moscow in 35 minutes and hyper- sound missiles in five minutes.

All of this happened against the background of American verbal assurances that NATO will not expand “which turned out to be just words”, and moreover “later, they [the West] began to assure us that the accession to NATO of the countries of Central and Eastern Europe would only improve [their] relations with Moscow, relieve these countries of the fears of a heavy historical legacy, and even, moreover, create a belt of states friendly to Russia. Everything turned out exactly the opposite.”

This was the third betrayal.

What can one conclude from this view of history which in many respects is accurate, but limited in the sense that all actions are viewed from only one angle: enmity to Russia. The rationale of everything is somehow the weakening of Russia and tricking her into submission. I think that hoping to change this view of the world through small adjustments in posture and relations is well-nigh impossible. It is such a well-established and strongly-held interpretation of history that perhaps only twenty years of explicitly pro-Russian policy by everybody might begin to change it. That, however is not forthcoming.

The only silver lining—if there is one—and assuming also that the world manages to survive the next years without a major conflict, is that reading Putin speech carefully and realizing that his views are shared by large segments of the Russian population and the elite might prompt Western politicians to treat Russia with greater awareness of these historical traumas and greater consideration in the future—in order to avoid another similar scenario.

With a scandalous ruling, the German Constitutional Court not only calls into question the legal system of the EU, but also proves that it is totally incapable of understanding a multilateral economic order. Heiner Flassbeck […]

Within a single generation, Poland has gone from one of the most egalitarian countries in Europe to one of the most unequal Pawel Bukowski is a research officer at the LSE’s Centre for Economic Performance […]