Following the first Global Workers’ Conference on 24-25 June of the Transnational Workers’ Network (TWN), Carlos Rodríguez Expósito of Taxi Project 2.0 gives his view of the strategy that can be pursued by the network in moving forward. If you would like to send in your reflections of the TWN conference to be published on The Gig Economy Project, contact ben.wray@hotmail.co.uk

Carlos Rodriguez Expósito is a specialist in telecommunications. Community Manager of Taxi Project de Élite Barcelona. Collaborates actively with the space No Mas Precariedad, formed by dozens of collectives in struggle and with 404 Comunicación Popular, the media of the social groups. 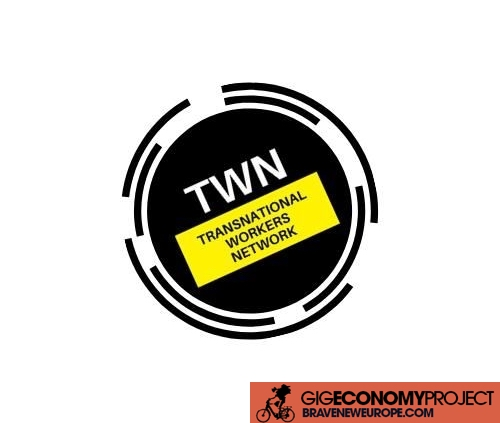 As the title of this article suggests, this is simply a vision, based on several years of experience in the fight against Uberisation, in my case from the taxi sector but in turn, collaborating with several sectors also affected by the same practices.

To begin with, we must understand that although the main concept is the same in every country, since it is a question of resolving the same problems, there are many specific aspects that affect us differently, such as legal and political aspects or in terms of communication. I understand that it is not the same to be able to create, modify or apply laws in all the Member States of the TWN, and I also think that there will be more receptive governments and political leaders with whom it will be easier to negotiate, and others with whom it will be more complicated.

I think that knowing the different options and differences between each of the members of the Network can lead us to find common points and from there to start to design the strategies that benefit us all equally. And in the same way, once we have found those points, I think it would help us a lot if we consider that the victory of one is the victory of all and, in the same way, can be applied to all.

But this requires a great deal of work, good coordination and, above all, knowing what resources we have and how to use them. It is very exciting but it is also going to be very hard. And it is worth it because in the end, the goal is not only to win but to extend victories beyond our immediate struggle.

As far as the actions in the streets are concerned, it is obvious that with a strong common front we can carry out and coordinate actions in the different countries that result in a greater impact than we can achieve alone. This is obvious, but we must count on it because it is important and is rarely seen. Can you imagine a mobilisation on the same day, at the same time in different countries against Uber or Deliveroo? The impact would be massive and above all, it would allow our message to reach more people and with more immediacy.

If a person or a single state complains against Uber, the citizen may think that it is something isolated, that it does not affect him being in another country. But, on the contrary, a joint action with such a great impact, can change the opinion in many cases and benefit us all equally.

And finally, with regard to communication, we need to be politically aware. After years of activity and struggle by the different members, I suppose that in each state there is a different sensitivity towards the demands of workers. In some, as has been happening in Spain, it will be more complicated to get our message and our demands across to the public, because the concept they have of the taxi has not always been as good as we would have liked (although now, in Madrid, due to corruption in the institutions with Uber, the image of the taxi is improving quite a lot). In other member states of the WTN, it will hopefully be easier to gain the support of citizens.

This is also something that we have to work on in order to find common points to define strategies, based on the fact that the important thing is to reach the citizens. For this reason it is also very important to define a common line of work in social networks and above all to have content so that the Transnational Workers’ Network has a constant flow of information and news and continues to generate interest. And for that, you have to look for tools such as contacts, publications in the different media, videos, special actions, and exchange of information. It is very important that, for example, the citizen of the Spanish state knows the problems that the driver of California has and that although we are in different nations, we have created a common struggle.

Because in the end we are all workers and citizens. They are the ones who use our services, and so we need their support.

In short, being organised makes us strong in the face of an enemy who is believed to be above the law of individual states. That’s why it’s very important to know our differences so we can find common ground and develop stronger strategies.

Our objective is the same and our differences are not obstacles but resources that make us stronger and have more weapons to fight. But we must be well coordinated and know how to take advantage of them.

We have just begun to walk together, which was the most difficult thing, and now the future that awaits us will be exciting.

Stuart J. Turnbull-Dugarte, José Rama – Madrid’s regional election: How we got here, what happened, and why it matters

On 4 May, the Popular Party, led by Isabel Díaz Ayuso, doubled their share of seats in a snap regional election in Madrid. Stuart J. Turnbull-Dugarte and José Rama react to the result, which also […]

Italy’s recovery must be considered a central task of European economic policy. Mario Draghi’s start as prime minister should be seen as an opportunity for a “New Southern Policy”. Philipp Heimberger is Economist at the […]

What will be the developments of the US economy in the near future? Michael Roberts is an Economist in the City of London and a prolific blogger Cross-posted from Michael Roberts’ Blog During the year of the […]