Following the taxi protest on Thursday [18 March] against Uber’s return to Barcelona (read more here), it has been revealed that the global ride-hail platform has not been operating in the city since it officially re-launched its app in the Catalan capital on Tuesday. Uber claimed it had 350 taxi drivers lined-up to use its app, but the regulator, the Metropolitan Taxi Institute (IMET), warned licensed drivers that they could face penalties if they use the Uber app, because the company does not offer closed price fares, as Barcelona private hires are legally required to do. IMET has also warned Uber that it could face sanctions. Those attempting to book a car on Uber in the city have been met with a ‘no vehicles available’ response message.

Carlos Rodríguez, community manager at Elite Taxi Association Barcelona, which led Thursday’s taxi protest, writes for the Gig Economy Project on Uber’s botched return to the city. Rodríguez says that despite the powerful enemy they are up against, Élite Taxi continue to defeat Uber in the Catalan capital.

Translated and edited by the Gig Economy Project

Élite Taxi has put a nail in Uber’s coffin. And that’s all there is to it. No matter who it annoys. After months of strategy, of always walking with a clear objective, to the point of sitting down with the enemy on several occasions, Élite Taxi has managed not only to prevent a global giant like Uber from entering the taxi sector in Barcelona, but also to expose it and show the world how when you resist, when you have the conviction to win, all they have left is manipulation and lies.

A lie that is becoming increasingly necessary for Uber, seeing how from Barcelona, from that coveted trophy that they thought they had already won, their lie is crumbling to such an extent that they no longer have the capacity to react to events, as they have always done, using the media (many of them owned by companies and funds with financial interests in Uber itself), lawyers from taxi drivers’ associations (who have been selling the benefits of Uber for months in the press) or government bodies, supposedly independent and uncorruptable, such as the ACCO (Catalan Competition Authority) or the CNMC (National Commission of Markets and Competition), which in reality work as servants of such companies, paid with state money to influence public opinion.

Ah, and politicians of course … (did you know that the husband of Inés Arrimadas, president of Ciudadanos, works for Uber, or that one of the directors of the VTC employers’ association (private car hire with chauffeur that works closely with Uber) was a councillor with the d notoriously corrupt conservative Partido Popular in Madrid)? 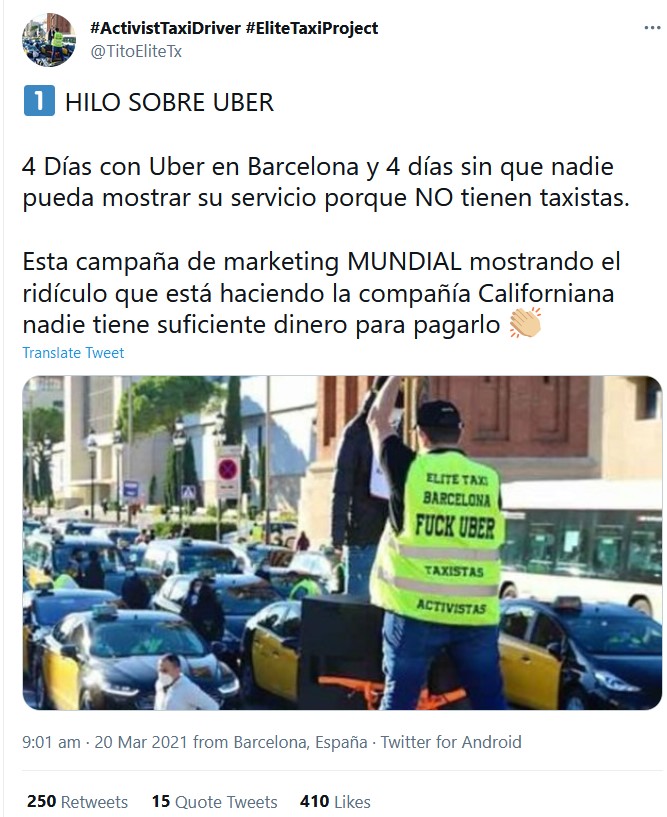 These Uber people are not very clever despite their financial might, but one thing they do know is who they have to buy to reach their goal.

They no longer have the ability to manipulate reality and they just keep repeating the same victimising discourse they were using at the beginning, when nobody knew them. But not any more, now society has got to know them well and we are witnessing how, faced with the inability to defeat the taxi industry even from within, they have tried to break into the sector without complying with the rules, bypassing public institutions and having been warned by the administration itself about the illegality they are committing.

And now that the story is over and they have many outstanding debts, they are showing their true face. We are witnessing how one of the most important multinationals in recent years is giving its last breath after years of harassment and demolition of the taxi sector in the Spanish state, which has meant the pain and suffering of many workers, of many families who live from their taxis. Uber was so desperate, that they threatened to enter Barcelona without complying with the law and have done so, thus disrespecting all public institutions that represent the general interest, that is to say, disrespecting all citizens.

We will continue to fight because the battle is not yet won. Barcelona will be the spearhead, the beginning of the end for Uber in Spain, but as would be expected in this David versus Goliath struggle a lot of work was necessary. In Madrid, the surprise announcement of regional elections and dismissal of the infamous transport minister in the Madrid City Council, Ángel Garrido of the neo-liberal political party Ciudadanos, provides a unique opportunity to overcome a situation that just a few days ago we thought was lost as Uber had bought the the city’s council. But thanks to the work and perseverance of associations such as Federación Profesional del Taxi de Madrid, Élite Madrid and Taxi Project, a glimmer of light has been seen at the end of the tunnel, and believe me, until recently, it was very dark.

A victory for the taxi drivers is a giant step forward in the workers’ struggle, in the resistance to defend the rights of all. Because it is well known that the public transport sector, given its importance in our cities and being an essential service for the majority of citizens, is another of the targets of the neo-liberal monster that seeks to steal everything that is ours, everything that belongs to the people and in turn, is another gateway to further subjugate more sectors which are so necessary for all.

It is the responsibility of the taxi, as a public service, after this war, to support any collective that is suffering in the fight for their rights.

It is critical to have a clear objective as important as defending public services, in an intelligent way and above all not to succumb to attacks. Whether they are, as is the case with Élite Taxi of Barcelona, from within the sector itself, or from outside – media, organisations, administration – must resist everything that Uber or people with an interest in Uber taking over our services undertake. We follow a straight and clear path.

And above all, despite all these stones in the way, we believe in what we do and know that any effort is worth it, because it is a job that will allow us to have a better future, not only for the taxi, but for everyone.

Julian Assange is a truth-teller who has committed no crime but revealed government crimes and lies on a vast scale and so performed one of the great public services of my lifetime. John Pilger is […]

No. There are a number of misconceptions of how state finances function. In this piece Ann Pettifor adresses one of these: why taxes are not used for spending. Ann Pettifor – Economist, director of Policy […]