Uber is back in the Catalan capital after being pushed out in 2019, but Barcelona’s taxi leader says “there will be war and it will not stop” if they don’t leave again.

In a new battle over Barcelona’s private hire market, around 5,000 taxis shutdown the city this morning in a slow march to the Catalan Parliament to register their opposition to Uber’s re-entry into the city. 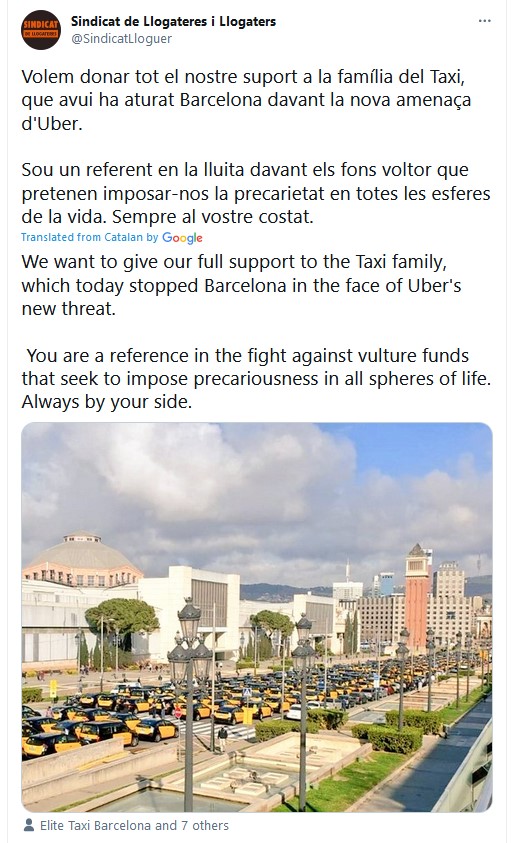 Led by the Elité Taxi Association Barcelona, the licensed taxi drivers say Uber’s re-starting of operations in the Catalan capital, which last ended in 2019 following the introduction of tougher regulations, is “illegal”.

Uber, which began operations again in the city on Tuesday [16 March], claim to have 350 taxi drivers in the city willing to use their app, a figure Elité disputes, and say that their re-entry in Barcelona is “completely legal”.

The global ride-hail platform first appeared in Barcelona in 2014, and was met by months of taxi strikes, traffic blockades, and occupations from the licensed taxi sector, leading to the creation of the Elité Taxi Association (read more here). Pressure on the Catalan Government lead to a law being introduced prohibiting private hire vehicles without a business license.

Uber’s re-entry into the city is on a different basis than in the past, offering an intermediary service connecting app users with licensed drivers. The price of the journey is set by the taxi meter, with the user able to pay through Uber’s app. The company is attempting to seduce licensed drivers in the city by offering discounts on Nissan cars, as well as car insurance free of charge.

The regulator, the Metropolitan Taxi Institute (IMET), has said that Uber is in breach of regulations because it is not offering a closed price fare (T3). It has warned the company that it faces sanctions if it continues to operate without this payment option. The IMET also warned licensed drivers using the Uber app without a T3 option that they could face penalties of between €251 and €1,250. Uber claims it is awaiting authorisation to apply a T3 rate.

Tito Álvarez, the spokesperson for the Elite Taxi association who has written for The Gig Economy Project previously, described the number of taxi drivers on the protest as “unprecedented”, and said that they expected all parties in Catalonia “to take a position in favour of the taxi and the institutions”.

On route to parliament, taxi drivers stopped outside the HQ of the employers’ association, Foment del Treball, of which Uber is a member, and threw fake money at the building. Foment del Treball’s chair Sánchez Llibre celebrated Uber’s return on Tuesday, stating “that more and more companies are betting on Catalonia and the arrival of new transport alternatives adapted to current market demands and that coexist harmoniously with traditional sectors”.

In a statement earlier in the week, Elité Taxi said Foment del Treball “represents the hardest wing of business organisations in Spain, the one that advocates slavery and absolute market liberalisation”.

Álvarez has warned that if Uber does not shut down its operations in the city “there will be war and it will not stop”. Elité Taxi have previously organised an indefinite strike in July 2018 which included blocking airport terminals, train and bus stations, as well as the city’s most busy streets, an action which led to the strengthening of private hire regulations in the city.

The taxi drivers’ protest on Thursday was supported by RidersXDerechos (‘Riders for Rights’), a trade union network linking up gig economy delivery workers in Spain, which stated: “The riders want to show once again all our support and strength for our road companions, the taxi drivers. In the face of criminal companies that have come here to charge absolutely everything, solidarity between workers is the best weapon! Always with the taxi!”

Sergi Cutillas – Who is the vice-president of the European Central Bank Luis De Guindos?

Luis De Guindos is the EU elite’s right sort of politician, as Sergi Cutillas documents. Sergi Cutillas is an economist and worked in the financial sector before taking up his work as a financial justice […]