In early 2014 taxi drivers in Barcelona rebelled against the unbridled growth of Uber, the online ride service. In six years they have turned that fight into a general offensive against “platform capitalism” in the EU. Alberto Alvarez explains the vehemence.

Alberto ‘Tito’ Álvarez is a taxi activist in Barcelona 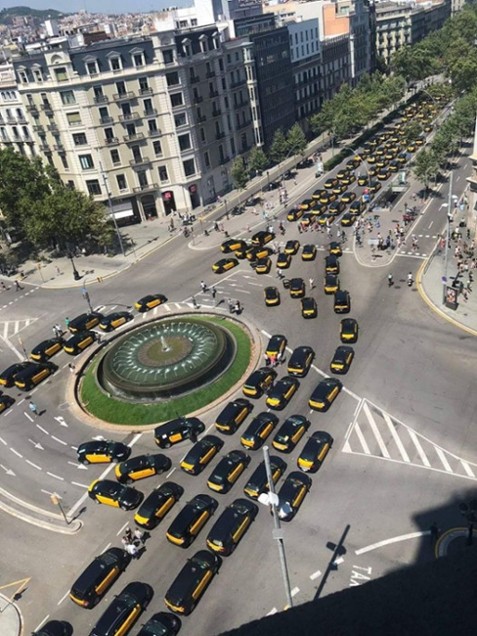 In April of 2014 Uber landed in Barcelona and the indignation of licensed taxi drivers exploded. In little more than two months we mounted a strike backed by 100 per cent of the drivers and a demonstration that would mark a milestone in our sector.

In just over four months we managed to generate a movement never before seen in the taxi sector, and we decided to form what is now called the “Elite Taxi Professional Association”. Without having any economic means we decided to start asking for funds, using money boxes at taxi ranks, with the aim of suing Uber for operating taxis without a licence.

After suing Uber we started to move into the streets, building a movement whose main objective was to put pressure on the public administrations by occupying public buildings related to taxi activity, such as the Catalan Competition Authority and City Hall. We also carried out continuous traffic blockades in the city’s arteries and wrote to politicians to demand they stop the voracious growth of Uber – after just over three months there were 2,000 private cars acting as unlicensed taxis.

The movement won a major victory with the introduction of a Catalan law that prohibits transporting travellers for hire and reward in vehicles without a business licence, with a penalty of €4,001. If the fine isn’t paid the vehicle is impounded. As a result of this victory, other Elite Taxi associations were born in 12 other cities across Spain. Where there is a taxi strike we join in solidarity: Paris, Toulouse, Brussels, Rome, Berlin…

The taxi profession is transforming itself into a movement that is occupying a new place in society: it collaborates and gives visibility to other collectives and social movements. In particular, the taxi profession participated very actively in the campaign against the free trade and investment agreements such as TTIP, CETA, TISA.  These are pacts that the EU has allowed in through the back door in order to give power to transnationals over nation states. Such treaties deregulate and liberalise economic activity, lower health standards, make public intervention in the economy more difficult and even establish arbitration tribunals (ISDS) between states and large companies, which benefit the latter.

Our biggest surprise came at the end of 2017 with the ruling of the European Court of Justice, which confirmed what we had been arguing all along: that the “collaborative economy” was a myth and that Uber is a commercial transport provider. Thanks to this ruling, we have avoided a situation in Spain where a million private cars would have been used as taxis through their App: now Uber needs vehicles to have an authorisation for employing Transport Vehicles with Driver (VTC). Despite this victory, we were constantly aware that the struggle did not end by putting a stop to the Uber model, since these transnational platform companies are like a six-headed snake.

From this moment our strategy was based solely on mobilising on the streets and forcing the administrations to regulate Uber’s activity more, no longer just for the sake of protecting our sector, but for the sake of social justice. It is here that our approach became more global, using all our media power to convey the message that “platform capitalism” – by destroying competition and making jobs precarious – destroys the productive fabric and public services, which are the basis of democracy.

In July 2018, after a ruling by the Catalan High Court of Justice annulling the regulations of the Barcelona Metropolitan Area on the activity of the VTCs, we decided to put an end to short mobilisations, and instead to go all-out. Our slogan was: “If what matters most is the economy, then we are going to stop that too”.

That is the message we gave to all taxi drivers. We started in Barcelona by blocking the airport terminals, train and bus stations and then, in an action never seen before, we decided to go to the city centre and stand there with the taxis: we occupied the Gran Via (the busiest street in Barcelona) and chaos broke out in the metropolitan area of Barcelona. Our strike spread to the whole state and expanded like a blot of ink through Catalonia, Madrid, Valencia, Malaga, Seville, Bizkaia, etc.

It was an incredible sensation to see how the populace supported us without blinking an eye, despite the indiscriminate attacks by the media, who were trying to undermine our real message. I remember that the media always asked me how long the indefinite taxi strike could last and how great were the losses we would incur. When I looked back and saw the faces of my colleagues convinced and with a smile from ear to ear, I gave the media a clear answer: “We will be here as long as it takes because these days are not a loss, but an investment in the future.”

This historic mobilisation led to a decree law being passed that enabled the autonomous communities to regulate the provision of services by the VTCs. This led to another mobilisation that began in Catalonia in January 2019, and which once again brought the city to a halt. This time it was won in six days, with legislation further tightening restrictions on VTC vehicles, and then just a few months later that regulation was additionally strengthened in the Metropolitan Area of Barcelona.

This time, Madrid followed the trail of Barcelona again, but unfortunately did not achieve the same results, which shows how important politics is in each locality, autonomous region, or state. Where the left governs, the commons is usually regulated and protected, while where the right governs, it is liberalised and privatised. It is surprising that those who call themselves patriots and are always talking about the greatness of the nation, have no qualms about handing over control of the economy and public services to large transnational companies. These companies avoid paying taxes and contribute to the destruction of the productive social fabric they claim to defend, harming small and medium-size entrepreneurs, and above all the workers of the country.

In February 2020, the idea of a new way to fight against the rise of the digital platforms was born. We have created a more effective strategy complementary to the struggles in the streets, since we understand that even if the results are very positive, mobilisation can run out of steam if it is not combined with other lines of defence. That is why we decided to create Taxi Project 2.0 in parallel with Elite Taxi.

Taxi Project 2.0 aims to explore forms of unionism of the future, which extends networks at a local, regional, national and international level.  We are exploring strategies that we had not considered until now and that go far beyond the struggle of our sector. These focus on fighting platform capitalism in different ways.

This is how we started our close collaboration with Ekona, the economy innovation co-operative, which is very important for us. Our objective is to understand which model of society we want and work through different channels, whether legislative, legal or in the field of public communication. Our focus is to propose a model of mobility in cities that protects the right to use public space – mobility as a common good. We want to push for a city with the minimum of pollution and decent wages for workers dedicated to these services.

To this end we have carried out actions such as filing a complaint against Uber and Cabify (another digital driver-platform). This was based on reverse engineering the applications for users of these companies, which allowed us to expose them and show the use and abuse they make of this consumer data, which violates consumer rights and data protection. We have studied how such companies avoid paying taxes through complex corporate structures that allow them to carry out tax engineering, pushing legality to the limit. We have collaborated with workers’ unions to lodge complaints with the Labour Inspectorate to request that overtime be paid to platform drivers and taxi drivers, and that contractual working hours be considered. We are seeking to register with the European Commission’s Transparency Register as if we were a lobby organisation to send a clear message: we are not going to remain just in the streets, we are going to pursue these transnational companies at the points where they generate pressure and influence on the EU. We will fight them on their own ground.

We have understood after these past six years that we must develop and build new and complementary forms of struggle.  We are convinced that we are going to achieve this even though we are aware that our enemy is very powerful.

George Hoare: The Full Brexit – towards a political theory of Brexit