Should Assange die in a UK prison, as the UN Special Rapporteur on Torture has warned, he will effectively have been tortured to death. According to the European Court of Human Rights Spain often resorts to torture, based solely on the cases that have been brought before it writes Chris Bambery. 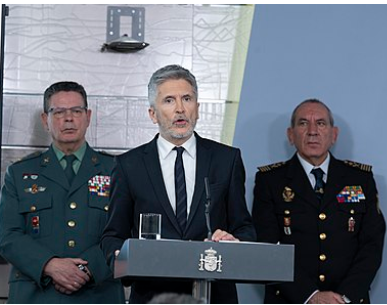 Which European country has been found guilty of using torture ten times by the European Court of Human Rights (ECHR)? The answer is Spain.

Last week the ECHR found in favour of a Basque pro-independence activist, Íñigo Gonzalez, who was arrested by the Spanish Guardia Civil in January 2011 on the orders of Judge Fernando Grande-Marlaska, who has advanced to be Spain’s Minister of the Interior.

While held in isolation Gonzalez claimed he had been tortured. Specifically that during his interrogation a bag had been put over his head, police choked him, hit him until he wanted to vomit and could not stand it anymore.

González together with Patxi Arratibel, Iker Moreno, Gorka Zabala, Xabier Beortegi and Gorka Maya, were arrested in a joint operation carried out by the Guardia Civil and the Spanish National Police. All of them reported similar mistreatment. The other five detained said they were also subjected to either simulated rape or having electrodes attached to their bodies.

They would later all be sentenced to prison terms by Grande-Marlaska, who held that their membership of the pro-independence group, Ekin, meant they were under the orders of the terrorist group ETA which he claimed  secretly controlled Ekin.

Last week the ECHR ruled unanimously that the case of Gonzalez breached Article Three of the European Convention on Human Rights, which prohibits torture, stating that “no one shall be subjected to torture or to inhuman or degrading treatment”. In its judgement the ECHR stated González described “in a precise and circumstantial manner the ill-treatment of which he claimed to have been a victim during his detention, when he filed a complaint before the duty judge in Pamplona as well as before the investigating judge at Spain’s National Audience court “. The latter is Spain’s supreme criminal court.

In reference to Grande-Marlaska the ECHR judgement stated:

Consequently the ECHR ordered that Iñigo González be paid compensation of €20.000 for the failure to properly investigate the torture which he allegedly suffered after his arrest by the Guardia Civil.

The other five arrested and tortured will, clearly, expect a similar verdict in their cases.

While the Strasbourg Court has now already ruled ten times against Spain for not investigating torture or inhuman treatment, Marlaska presided over seven of those cases, being ultimately responsible for the well-being of those people during their detention.

The lawyer in four of those cases in which Marlaska presided was Amaia Izko, said of them:

“We proved the judge did nothing to investigate or impede the torture and police brutality [occurring] while the detainees were held incommunicado. There are many more such cases. I have represented hundreds of people who denounced being tortured [by the police] while awaiting trial under judge Grande-Marlaska.”

The Spanish judiciary includes political appointees who owe their position to either the Socialist Party (PSOE) of the centre right Popular Party (PP).

Last month I reported here that the Audiencia Nacional had after two years, decided to ignore a ECHR ruling overturning the jailing for six and a half years of Arnaldo Otegi, a central leader of the left wing Basque pro-independence coalition, EH Bildu, and a key figure in the Basque peace process. Otegi was found guilty of ETA membership in a trial where the ECHR found the judge did not behave impartially. Otegi now faces a retrial.

The Audiencia Nacional is unique in Europe as a special penal court which can initiate criminal cases. It has ordered trials involving charges of terrorism against Basque pro-independence figures.

One notorious case, known as the Altsasu case, named after the town in Navarre (a Spanish province with a large Basque population) where in October 2016 nine Basque youths were involved in a bar brawl with two off duty Guardia Civil officers. A local court initially saw this as a straightforward assault case — fuelled by alcohol at 5am — but then it was referred to the Audiencia Nacional, with the nine defendants initially facing a combined 375 years in prison for alleged terrorism offences.

The nine spent a year and a half in pre-trial detention before receiving sentences of up to 13 years.

The Audencia Nacional, which had dedicated itself to search for Basque terrorists even though there is no terrorism after ETA dissolved its structures and destroyed its weaponry, has more recently turned its attention to the supposed infringements of Catalan pro-independence activists. Charges of terrorism have been brought here too, despite the independence movement being almost entirely non-violent. Despite arrests it has never come to a conviction.

Back in 2018 Tamara was hauled from her home in Catalonia by the Guardia Civil in a massive operations and taken to Madrid where she faced  initial charges of rebellion, sedition, and terrorism in relation to her involvement with road blockades and other forms of non-violent direct action.

After being detained in a Madrid jail awaiting trial in the Audiencia Nacional, after the court dropped charges of terrorism. she was placed under house arrest, ordered to remain in her home town of Viladecans, outside Barcelona. She has since been declared innocent.

The Audiencia Nacional has already sentenced nine Catalan civic and political leaders to long prison sentences for organising the October 2017 independence referendum; barred one, Oriol Junqueras from taking his seat in the European Parliament. It has received further setbacks as German, Scottish and Belgian courts have ruled against granting European Extradition Warrants against Catalan leaders who fled Spain to avoid arrest.

Despite the decisions of the ECHR to overturn the judgements of the Audencia Nacional, the judges involved have remained in office. And there’s little chance of Interior Minister Fernando Grande-Marlaska initiating something of that sort

Arbitration lawyer Juan Carlos Boué presents the case of Columbia, which has included an environmental exception in their treaty with Canada. Still they were sentenced by a tribunal to pay damages to a Canadian mining […]